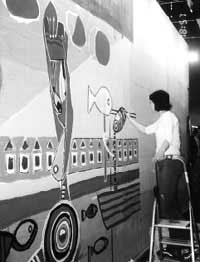 even in a scene which was as spectacular, chaotic and confusing as a circus, it was a lone, odd voice. While all the participants were harping on the water scarcity facing the world, a pamphlet doing the rounds at the Second World Water Forum, held at the Hague in the Netherlands from March 16 to 22, 2000, pleaded a difference in opinion. "There is no water scarcity," it said, urging all parties at the largest international gathering on water policy in history to stop sponsoring water scarcity and start looking and addressing the gross mismanagement of this precious resource.

This was the voice of the New Delhi-based Centre for Science and Environment ( cse ), the only non-governmental organisation ( ngo ) from the South to participate independently in the forum. In an event dominated by the all-too-familiar stances and rhetoric - anti-dam activists trying to draw attention to large dams, private sector companies trying to create a market for themselves in water supply, and ministers and government representatives looking serious but saying nor doing anything of consequence - it was an effort to come up with something positive. A reminder that the world has enough water if it knows how to manage it properly, that water scarcity was due to mismanagement and the solution lay in a change in the policy-makers' mindset (see box: Water and common sense). The five-day forum included a two-day ministerial conference, which culminated in "the Hague ministerial declaration on water security in the 21st century", a watered-down document widely described as a disappointment (see box: Not much to declare).
More than 3,500 participants, 500 delegation members, 400 journalists and 118 ministers participated in the forum and the parallel ministerial conference. Registered participants from India accounted for 99 of them. The reason for organising the World Water Forum is the growing realisation across the world that freshwater resources are depleting at an alarming rate (see box: The wake-up call ). The objectives of the forum were two-fold

l to raise mass awareness about water crisis and the ways to deal with it, and

The forum opened with several calls for rapid solutions to the world's growing water crisis. The figures are indeed very sobering: one billion people lack access to safe drinking water and two billion people lack water for safe sanitation. "The number of people participating and the interest of the media in the event must help increase the world-wide awareness of the water crisis," said Willem Alexander, crown prince of the Netherlands and the chairperson of the forum, speaking at the end of the first day's proceedings. "This already means that one of our important objectives is satisfied."

The event was inaugurated by Mahmoud Abu Zeid, Egypt's minister of water resources and irrigation who is also the president of the World Water Council, and Ismail Serageldin, vice president of the World Bank who is also the chairperson of the World Water Commission. As has become common with most international events of the sort, there was more than an unfair share of drama. While the speakers at the inaugural were struggling to get to the microphone, the unplanned struck. A woman activist, protesting against the Itioz dam in Spain, handcuffed herself to a chair. A man used a rope to hang down from the balcony with a banner saying "Stop the Itioz dam".

March 19 marked the official opening of the Youth Forum. About 4,000 children from all over the world gathered to express their hopes for the future.
The anti-dam lobby had a loyal media following. So single-minded were the protestors that every issue boiled down to a loud "say no to dams". Even positive examples of communities managing their own water resources and exercising their 'water rights' were overlooked by the protestors.

At the session on ngo s and water, Sunita Narain, deputy director of cse , had described in her welcome address the Arvari River Parliament of Rajasthan, where village communities are managing a river that they have revived by building small, earthen check-dams called johad s.But Patrick McCully, campaign director of the International Rivers Network, a us -based ngo , had only one comment to make: "But India also has the Sardar Sarovar Dam over the Narmada." Observers noted that the unwillingness of anti-dam protestors to accept anything positive, even if it came from rural communities, was actually doing disservice to their own cause. Sparks flew during the session on water and energy when the Gujarat minister for Narmada, Jai Narain Vyas, and those opposed to the dam got into a heated debate. The hostility between the two was a shock and a source of much amusement to many in the international audience. The Indian government had gone to the Hague all prepared to defend the Sardar Sarovar Dam. The Indian government delegation struck to defending the dam and had little else to offer in terms of its substantive vision of managing water.


The World Water Fair was also organised along with the forum. Its aim was to create awareness and commitment 'beyond delegates'. People from different backgrounds came together to discuss issues of interest (see box: Futureware ). unicef rubbed shoulders with private companies like Perrier Vittel, a French concern that makes mineral water. The objectives of Perrier Vittel were simple: to make the world know the difference between tap water, still water and mineral water.

Emphasising the gravity of the global water crisis was the lack of drinking water at the venue. Also noticeable was the presence of the private sector - the fair was dotted with far too many private enterprises - as well as the low representation of national governments and the virtually no presence of the civil society of the South.


The finale of the forum, the draft ministerial declaration, came as a damp squib to many experts who felt that the declaration was too weak. "Where have all the rich discussions that were held in the various sessions gone?" asked a World Bank participant. For instance, the vision report of the World Water Commission had recognised, for the first time, the need to involve everyone in water management and that providing water should not be the duty of the State alone. It recognised the needs for implementing the 'polluter pays' principle, for subsidising water to the poor and for effective community participation. It also defined the role of various stakeholders. All this was lost in the generalities of the declaration.

Though the recommendations of the various sessions were discussed during the ministerial, these were not endorsed. Instead, ministers agreed on a guidelines for their governments to address water management issues, such as securing food supplies, protecting ecosystems and managing risks including floods, drought and pollution.

ngo s and major trade union groups did not accept the mandate of the World Water Commission and the World Water Council Vision document, expressing serious concerns about the process and contents of the "framework for action". However, the ministers used their criticism as an excuse to water down the statement to meaningless rhetoric.

Anil Agarwal, director of cse and a member of the World Water Commission, is severe in his criticism of the ministerial declaration: "It was an absolute and utter disappointment. Almost as if the politicians are just not prepared to confront any of the realities and want to continue wasting and polluting water under the aegis of our State agencies. The ministerial declaration makes no mention of the need to price water and, therefore, ensure that the benefits of the subsidies do not go to the richer sections of the developing world."

"Neither did the ministerial statement mention anything about the involvement of the private sector, the changing role of the State or the participation of local communities in water management. Privatisation of the water sector remains an extremely controversial issue but the State cannot meet all the water needs. The ministers should have discussed this issue and come to some conclusion on it. But the ministers, of course, just totally ducked all these issues," observes Agarwal.

With inputs from Pradip Saha and Eklavya Prasad