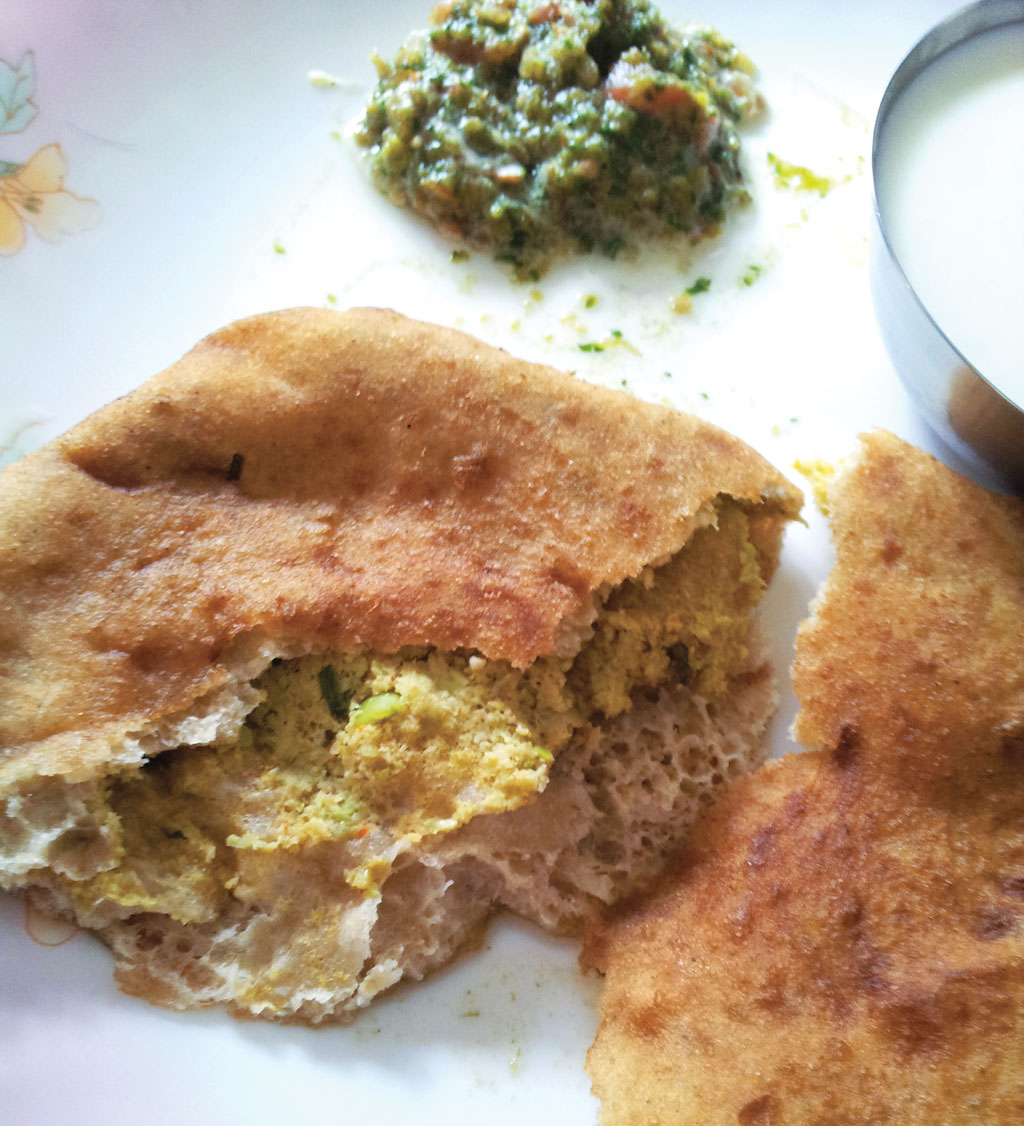 Green soybean-stuffed bhatoora is a popular dish in wedding ceremonies

I WAS taken by surprise when Lata Bharti, whose family runs a popular homestay in Goshaini village in Himachal Pradesh, told me she was going to use soybean as a stuffing for the whole wheat bhatooras to be served for breakfast. I joined her in the kitchen curiously only to be served another surprise. The soybean was green in colour unlike the commonly found beige and black soybean. Lata had soaked the beans overnight and quickly prepared a coarse paste in a grinder along with some ginger, cumin, coriander and chilies. The green soybean paste was stuffed into fermented whole wheat dough, flattened and deep fried for the pleasure of hungry guests who had returned from an early morning mountain trek.

Conversations with local farmers and shopkeepers revealed that this soybean variety has been growing in the Lesser Himalayas for ages. Soybean originated in northeast China (Manchuria) and is said to have reached the Indian part of Lesser Himalayas through trade routes. Now it is cultivated in many parts of the country, including in Himachal Pradesh.

A green soybean variety, Himso 1563, is used extensively by farmers as it is immune to diseases like bacterial pustules, brown spot, bacterial blight, frog eye leaf spot and pod blight. This variety is also resistant to pod shattering while ripening and drying in situ. The crop is not grown across India due to lack of knowledge about ways of using it. Stuffed bhatoora is just one of the ways communities use the seed and is a popular item in wedding ceremonies.

Soybean gained popularity in China as people started recognising its nutritive value and started using different techniques to make soybeans palatable. Soy protein is not easily digestible due to the presence of complex carbohydrates and phytates. Fermenting the soybeans was a method employed by the Chinese, Japanese, Koreans and other Southeast Asian countries to make products like Natto and Miso (Japan), Tempeh (Indonesia), Doenjang (Korea), Douchi and Minachi (China) and Tuong (Vietnam). The fermentation process was a result of extensive culinary experimentation to use soybeans as a source of good protein.

The fermentation of soybeans is a traditional practice in Manipur, Nagaland and other north-eastern states in India too. In Manipur, local soybeans, which are pale and smaller in comparison to the hybrid varieties, are used to make a fermented condiment called hawaijar. To prepare hawaijar, soybeans are soaked overnight. The soaking water is drained and the soaked soybeans are boiled in freshwater till they become soft, but not mushy. The soybeans are then strained and wrapped immediately in a muslin cloth, trapping the heat to allow the fermentation process.

Traditionally, the boiled soybeans are wrapped in leaves, placed in bamboo baskets and then wrapped with paddy straw in a warm place, preferably the granaries, so that the fermentation is facilitated by lactic acid bacteria found on the surface of paddy husk. Hawaijar is served as a condiment mixed with bhutjolokia chilies and salt. It can also be added to vegetable stews made with Colocasia leaves or tubers along with smoked dried fish.

In Nagaland, a similar fermented soybean condiment is called akhuni. The people of Nagaland also make a chutney with cooked soybeans. It is evident that wherever soybeans became regular food, the process of cooking was adapted to make it more digestible and nutrition efficient.

The black soybeans of Uttarakhand and Himachal are called bhatt and a slow-cooked curry made out of it is called bhattkichudkani. The raw beans are dry roasted in an iron kadhai till they crackle and then the beans are slow-cooked along with spices and tempered to make a rustic, yet delicious curry called bhattkichudkani. Since soybeans are known for their high phytic acid content that causes bloating and retarded absorption of nutrients, this method of soaking and dry roasting must have evolved to denature the phytic acid in soybeans.

Another dish made with a paste of soaked black soybeans is called bhattkadubka. These rustic curries nourish mountain people, who do not get access to good sources of protein in their diet throughout the year. The dry roasted black soybeans are also consumed as nuts.

Soybeans have become popular in urban locales too and is consumed as a flour. Almost everyone who consumes multigrain flour gets soybean flour mixed with multigrain flour. The high-protein content of soybeans is luring, but we need to be careful about the source and variety of soybeans, as well as the way we cook them in our kitchens. To get rid of the high phytic acid content, soybeans need to be soaked for at least 12-14 hours so the water solublephytates are drained away. The soybeans can then be dried and milled to make flour.

The author is a food and nutrition consultant