When it was introduced in Europe, people associated the potato with disease 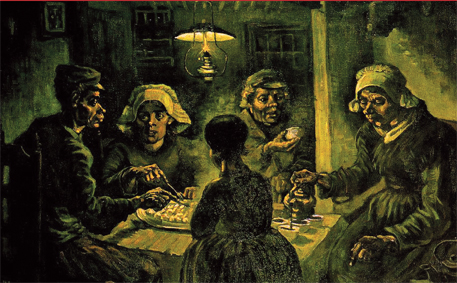 In 1769, the wheat crop failed in France. Bread, the French staple, disappeared from boulangerie shelves. There was rioting in the streets of Paris and hordes of undernourished people looted bakeries. The French monarchy which had just scraped through the Seven Years’ War with Russia, Austria and Prussia (1756-1763) could ill-afford another crisis. It asked the Académie de Besançon for a solution. In 1770, the university decided to “offer a prize for the best study of food substances capable of reducing the calamities of famine”.

The winner was a young pharmacy apprentice who a few years earlier had served a term in a Prussian prison. Antoine Augustin Parmentier was barely 18 when his pharmacy in Paris decided to spare him for the army during the seven-year war. He was wounded and taken to a Hanover prison in 1761, where he passed his days observing potato saplings outside his cell. He did not suffer much privation, except being fed three knobs of potatoes every day. To his surprise though, the meagre diet kept Parmentier healthy during a two-year prison stint.

After the war ended, he returned to Paris with potatoes on his mind. “How sad it is,” Parmentier noted in his diary, “that savants have devoted volumes to exotics, but did not have the curiosity to examine this nourishing substance.” His inquiry into the properties of the potato swept the gold at the Académie de Besançon contest.

The spud that causes leprosy

Parmentier—and the potato—was an unlikely winner. More than 150 years after its introduction in Europe, the tuber had not found much favour. Clergymen banned their parishioners from planting the potato, saying it was unfit for human consumption because it was not mentioned in the Bible. Herbalists in England described potatoes as “weird products of dirt and darkness”. It did not help that the first potatoes to arrive in Europe were not uniformly shaped. For the herbalists, the misshapen tubers resembled the deformed limbs of the leper—the outcast of the Middle Ages. In 1616, the French province of Burgundy banned potato cultivation, Paris followed suit a few years later. In 1633, the English herbalist John Gerard noted, “Burgundians are forbidden to make use of these tubers, because they are assured that eating of them causes leprosy”.

A century later The Encylcopaedia Britannica described the potato as “The Demora - lizing Esculent”. Historian William H McNeill believes there were other reasons for the rough treatment accorded to the tuber. Growing potatoes conflicted with traditional patterns of land use in England and the continent. The European farmer rotated cereals with fallow and stock grazing. There was no place for the potato in this scheme of things. To grow potatoes, farmers would either have to give up a portion of their cereal cultivation or bring new land into cultivation. Both options demanded a major investment of conviction as well as resources. Botanists of the time did not help by describing the botanical features of the potato plant and not considering the utility of the parts that lurked underground.The flowers were so attractive that the Finnish botanist Olaus Rudbeck recommended them as garden flowers.

Potatoes began to gain a semblance of acceptance in Prussia during the 1740s. During an eight-year war against Austria, Frederick the Great of Prussia recognized the potato’s value for keeping peasants alive in time of war—when armies would ravage cereal harvests. In 1744 he ordered the distribution of free potato seeds with instructions on planting them. There was some resistance. In 1744, for example, when the free potatoes arrived in Kolberg, a small town on the Baltic coast, farmers refused to have anything to do with them. Fredrick is alleged to have responded with the threat: those hostile to the potato would have their ears and noses ripped out. There is no evidence the threat was ever carried out. But from 1745, soldiers accompanied potato cartloads. The measures worked. When French, Austrian and Russian armies ravaged Prussia repeatedly during the Seven Years’ War, Frederick’s peasant subjects escaped disaster by eating potatoes.

The potato’s popularity owes a lot to
Antoine Augustin Parmentier, an 18th century
French pharmacist, and to a Prussian king

All this was not lost on Parmentier. His victory at the Besançon contest secured the pharmacist an entry into the French royal circles. He was closely associated with government efforts to guarantee food supplies during the troubled last decades of the 18th century—wheat crops failed frequently and France went to war several times. But France still had no royal potato promoter in the Frederick mould. Parmentier had to wait till 1785 to get a royal audience on August 23, the king’s birthday. Louis XVI and his wife Marie Antoinette were so enchanted when Parmentier presented them a bouquet of potato flowers that they promptly ordered the potato’s inclusion in the menu.

This was enough to inspire emulatory haste. Lords and ladies of the court began serving potatoes—some even had potato flowers painted on their best chinaware. Now that the potato was acquiring respectability at the court, Parmentier began promoting it with the panache of a modern-day public relations professional. He hosted dinners at which his guests ate nothing but potatoes. The scientist and statesman Benjamin Franklin was present at one such event, Thomas Jefferson, later the president of the US, was present at another.

These extraordinary affairs featured potato soup, potato entree, potato salad, potato bread, even potato cakes and potato cookies. But persuading high society was one thing, impressing the impoverished French was another. Parmentier was adept even here. In 1786 he acquired an unproductive patch on the outskirts of Paris. During the day, he set a guard over it. This drew considerable attention in the neighbourhood. In the evening the guard was relaxed and people came to see what all the fuss was about. Believing the plant to be valuable, many stole potatoes and soon were growing the root in their own garden plots. Their resistance was overcome by their curiosity and desire to better their lot .

Three years later, the French revolutionaries were quick to include Parmentier as one of their own— despite the potato propagator’s hobnobing with the royalty. The potato came into its own in the 19th century when it was lauded by a range of savants including Thomas Malthus and Charles Darwin. In the 1850s an over-reliance on the potato caused the Irish potato famine. But the potato had come to stay.