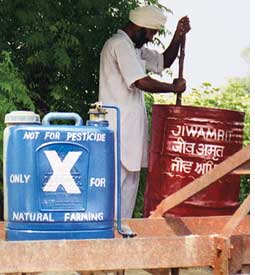 The first International Assessment of Agricultural Science and Technology for Development, released on April 15, 2008, believes there should be a shift in agriculture to a 'multifunctional' style that recognizes the ecosystem service values as well as cultural values of agriculture. It suggests small-scale farming and agriculture free of genetic manipulation can be the answer to soaring food prices, hunger, social inequities and environmental disasters. The report was released at an intergovernmental plenary in Johannesburg, South Africa. "The iaastd is unique in the history of agricultural science assessments," said the executive summary, "in that it assesses both formal science and technology and local and traditional knowledge".

The release marked the end of a process that began in August 2002, when the World Bank and the Food and Agricultural Organization announced a global consultative process to determine whether such an assessment was needed.


Agricultural policy worldwide has emphasized increasing yields through "improved germplasm, and increased water, agrochemicals and mechanisation" that has had negative consequences... Environmental sustainability in agriculture, on the other hand, lies in small farms, since such farms have "high water, nutrient and energy use efficiencies".


GM crops are highly controversial and will not play a major role in addressing the challenges of climate change, loss of biodiversity, hunger and poverty.


In January, while the assessment was in process, Nature pointed out, "Insiders agree the current draft is decidedly lukewarm about technology's potential in developing-world agriculture." Science was clearer "Industry scientists...believe the assessment was hijacked by participants who oppose genetically modified crops."

Syngenta walked out of the assessment process, disagreeing over its conclusion on gm crops. "We do not believe that the currentreport adequately reflects the role modern science and technology...have played in supporting agriculture," said Mdard Schoenmaeckers, head of media relations, Syngenta. Governments of usa, Canada and Australia rejected the assessment.