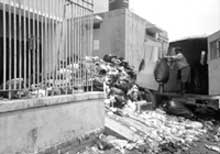 the lack of knowledge on hospital waste management stems right from India's ministerial level, but Karnataka's minister of health and family welfare, Malakka Reddy, is ready to listen. "Most of our incinerators are not working. We have no dumpsites or trained personnel. Please advise us," was his request to participants at a conference on hospital waste management, held at the M S Ramaiah Hospital ( msrh) in Bangalore from May 25-26, 2001.

However, the medical professionals in India are only now beginning to understand the importance of hospital waste management. Even the conference-sponsor, the Indian Society of Hospital Waste Management ( ishwm ), was formed only in 2000. "The doctors wouldn't understand what we were talking about," says L K Verma, and ishwm founder-chairperson.

Participants at the conference expressed concern over the misuse of incinerators. This was because governments around the world had signed an agreement to ban the production of persistent organic pollutants (pop s). Incineration produces two chemicals, dioxin and furan, which are listed under pop s. Verma said the ishwm was advocating alternatives and integrated approaches; incineration of non-plastics was only one of the components. Most other participants felt if plastics were excluded from burning, the problem would be bypassed.

The key to hospital waste management is the segregation of waste at source. However, this is not being practiced in most hospitals across the country. Though the rules have specified colour codes for various types of waste, mixing of waste takes place. Thus many a times, waste which should not be incinerated, goes for burning. Take the case of Bangalore. The city is home to about 400-odd nursing homes, 30 major hospitals, 100 blood banks and 5,000 general practitioner clinics. A survey of 84 healthcare units in 1997 found waste segregation and improper containment to be as major a problem. The question of toxic polyvinyl chloride ( pvc) incineration was a surprisingly lesser problem, though the concept of income generation through its resale was both known and practised, says Girish of msrh .

msrh began a project in 1999 in 50 health institutions around Malleshwaram area, conducted in collaboration with the Bangalore Mahanagara Palike, Centre for Environment Education and Karnataka's department of forests and environment. A colour-coding and disposal system for waste sharps (needles, broken ampoules, blades and lancets), recyclable plastics, general and infectious waste was set up, with the collection and disposal of each category set for different days. Girish feels that the staggered-collection-system is essential for inculcating proper disposal. "Otherwise hospital workers tend to mix everything when the disposal van comes," he says.

There are significant practical problems of distinguishing pvc and non- pvc plastics for disposal. "We still don't know which ones are pvc, " says one Bangalore doctor. Additionally, some implements have a combination of pvc and metal (ryles tubes), adding to disposal problems. The hospital waste management and handling rules 1998, prohibits the burning of pvc . But many hospitals continue to defy the rules. Take the case of blood bags. Bags containing blood need to be incinerated. But the bag itself, which is made of pvc , must not be burnt. Due to the lack of a proper disposal option, pvc bags continue to be burnt, thus emitting the cancer-causing dioxins. msrh, hence, advocates non-burning of all plastics, which are shredded and sent for recycling.

The cost of going for safe hospital waste management has been cited as a reason for its non-implementation. But there are ways to cut costs. For example, the cost for the 75-bed msrh is estimated at only Rs 25,000, but an incinerator costs between Rs 3-3.5 lakh. hudco has already offered installation loans to those investing in waste management facilities. Any hospital would need an initial investment of Rs 6-7 lakh, which pays back by reduced waste generation through good practices and recyclable-sales. msrh 's costs on disinfection reduced 35 per cent in its second year of operations due to available facilities and good practices. "Capacity or infrastructure-building at each stage is what's needed more than education," says Girish.

The conference's field hospital-visits showed private ventures had poorer awareness than government-run centres. Delegates commended the administration's commitment to the government-run 686-bed Bowring Hospital. Missionary-run large hospitals like St Martha's and St John's too had good working systems together with the willingness to improve them.

The Karnataka Pollution Control Board ( kspcb) , however, shows Karnataka's huge task ahead. While currently still compiling a record of all health institutions' waste systems, Sadiq Ahmed of kspcb , says only 12 of the over 2,000 healthcare centres documented so far have individual waste disposal systems. "We are encouraged by the fact that around 800 establishments have applied and obtained authorisation for operations," he says.

kspcb 's optimism includes the controversial incineration system. With three common facilities -- all with incinerators -- being on the anvil, one firm, Maridi Ecotherm Systems says that the hospital waste rules 1998 does not ban incineration. While Hyderabad's administration has the only operating common disposal facility working currently in the whole country, Karnataka has yet to designate a landsite for disposal.

The conference threw up some questions on the government's role in encouraging indigenous technology, very necessary to cut costs. Ajay Jain of Delhi-based Jain Hydraulics, whose hydroclaving system was vouched as the most effective method of hwm , says, "Compare our price of Rs 43 lakh to an imported machine's costs of Rs 1.5 crore."

Experts believe that a common treatment facility could go a long way in safely disposing off hospital waste, rather than having individual incinerators at every hospital. These could be set up on the outskirts of the city. Hyderabad has such a facility and Chennai plans to come up with one such facility. Talks are underway to have such a facility for Delhi too. Amid the huge hwm mess countrywide, what primarily lies ahead for the ishwm is to clearly establish and disseminate both methods and standards of technology.