An order of chaos

National Green Tribunal's decision to declare an area of 10 km radius around Okhla Bird Sanctuary as ecologically sensitive has put the future of 74,000 home buyers in NCR at stake

An order of chaos 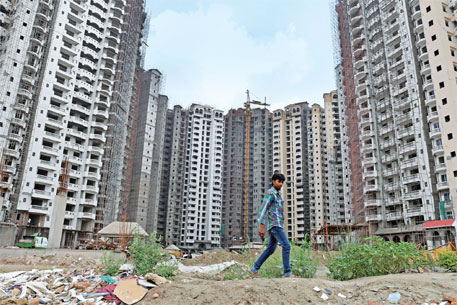 SITTING IN his dingy shop in sector-5, Noida, Indresh Gupta is typing a letter addressed to Union home minister Rajnath Singh. “This order has jeopardised the future of 74,000 people,” he says. Gupta is founder-member of Noida Extension Flat Owners’ Welfare Association (NEFOWA) and the room attached to his shop is the office of the association. The order he is referring to was passed by the National Green Tribunal (NGT) on May 30. It declared a 10 km radius around Okhla Bird Sanctuary in the National Capital Region an ecologically sensitive zone (ESZ) and outlawed any construction activity in the area. Gupta and a few other members of the association have been trying to get the newly elected BharatiyaJanata Party-led National Democratic Alliance government at the Centre to intervene in the case.

The tribunal’s decision has come as a shock to house owners as well as builders who will now require clearance from the National Board of Wildlife to continue construction around the sanctuary, which was created after a barrage was built on the Yamuna in 1989.

“Practically, the 10-km radius ESZ means a complete ban on new construction in areas as far as the India Gate in the north, sector 62 A (bordering Ghaziabad in Uttar Pradesh in the east) and Greater Kailash-2 in south-west Delhi,” stated senior counsel Abhishek Manu Singhvi who represents Jaypee Group in the tribunal.

The order by the NGT Bench, headed by justice P Jyothimani, was passed on a petition filed by Noida-based lawyer Amit Kumar. The lawyer had asked the Ministry of Environment and Forests (MoEF) in 2013 to notify an ESZ around the sanctuary that spans 3 sq km and attracts over 330 bird species from places as far as Siberia. These include several endangered birds. The number of avian visitors has, however, dwindled over the past decade because of construction activities and pollution in the Yamuna.

However, it will not be correct to blame the tribunal for the ESZ decision. In October 2013, the same Bench had cancelled the environmental clearance of 49 real estate projects in and around Noida Extension after it was revealed by Kumar that environmental clearance were secured by builders on false grounds. They had claimed that there were no sanctuaries within 15 km radius of the projects. But some of the projects are only 2-4 km from the sanctuary, considered the only breeding ground in the country for the bristled grassbird. 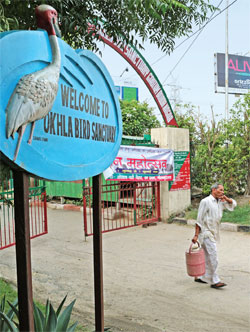 It is also evident that the states and the Union government are at fault for accepting builders’ claims without verification.“Most of the builders in Noida not only violate environmental laws, but flout floor area restrictions and groundwater norms,” states Kumar.

Jaypee Group maintains that not all builders have flouted laws. “There were delays in the environmental clearance. However, putting a complete ban on the construction of new apartments is something that will impact investments running into thousands of crores of rupees,” says a spokesperson.

More than the builders, the order spells bad news for flat owners who have invested in over 50 projects in Noida. According to NEFOWA, till June 2013 buyers had invested up to Rs 1,000 crore in these properties which were proposed to be ready in the next 14 monthsbut are now stuck in a legal wrangle. When Jaypee Group approached the Supreme Court on June 14 for a decision on ESZ, the apex court dismissed the plea saying it was up to MoEF to decide.

The NGT order is based on a decision by the Supreme Court in 2006 where it banned all mining activities in 10 km radius around protected areas in Goa. In May, Singhvi told the tribunal that it had misinterpreted the Goa judgement. Earlier, in April, even the Supreme Court had said that it had never imposed an ESZ of 10 km radius around protected areas. However, the tribunal has refused to review its judgement.

Between September 2013 and May 2014, the state governments of Uttar Pradesh and Delhi deliberated over ESZ and decided that an area of 100 m radius around the sanctuary would suffice. This was done following a Supreme Court order to MEF to ask all states to demarcate ESZs within their territories. Initially, forest officials in Uttar Pradesh’s GautamBuddh Nagar district, where almost two-thirds of the Okhla Bird Sanctuary lies, recommended a 1 km radius ESZ. But in April 2014, the forest department decided to shorten it to just 100 m. The counsel appearing for the state government before NGT during a hearing of the case was unable to explain the basis of the decision.

Similarly, in March, the Delhi gover-nment recommended a 100 m radius ESZ. Speaking to Down To Earth, a Delhi forest department official defended the decision saying that since the sanctuary mainly comprised a water body, a 100 m ESZ is sufficient. Both the proposals are with MoEF which is yet to take a final call. Till it does, NGT’S10 km radius ESZ remains in force.

The controversy is proving a nightmare for buyers like 58-year-old Harish Bhalla, who will retire this October. Living in a modest two-room flat in Lajpat Nagar, Bhalla had decided to buy an apartment developed by Amravati Construction in Sector 49 of Noida. “I wanted to live in an open space with lots of greenery. We paid 30 per cent in advance and the rest is to be paid once we move in,” says Bhalla. The deal also requires him to deposit EMIs for the apartment only after moving in.

But with NGT imposing a stay on construction in October 2013, Bhalla has not been able to get the possession of the house. According to the agreement between Bhalla and the developer, if the project gets delayed by six months, the developer would have to pay a certain amount per square feet of the floor area of the house. 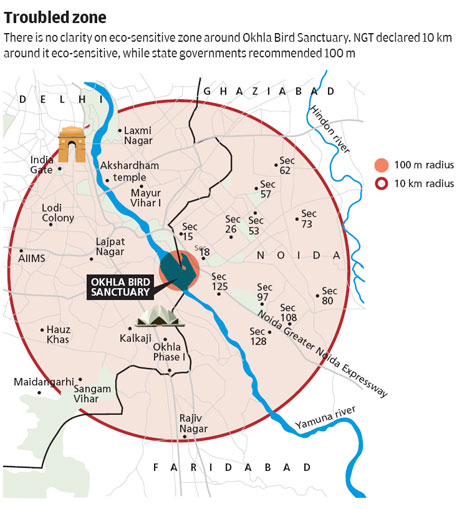 “Since the project is delayed due to litigation, the developer has refused to pay despite a delay of more than six months,” he says. Moreover, with the delay in construction, Bhalla is worried the builder may ask him to start paying EMIseven before moving in.

The flat owners now accuse the Uttar Pradesh government and the builders of cheating them. They have also made several complaints to the Confederation of Real Estate Developers’ Associations of India (CREDAI). Gupta says that complaining to CREDAI has not helped as the body’s chairperson is a builder himself, heading the Maharashtra-based real estate group, Kumar Builders. “About Rs 7 lakh are paid in stamp duties to Uttar Pradesh and Central governments by buyers for an apartment which costs Rs 50 lakh. If these structures did not have environmental clearance, what right did the governments have to take stamp duty?” asks Gupta.

According to a report released last year by investment management firm Jones Lang Lasalle India, the delay in delivering apartments to buyers in Noida Extension could extend by more than 23 months. On an average there are delays of 14-15 months. “However, due to various issues related to clearances, the delays have reached a high similar to 2007,” the report states.

Even as buyers wait to get possession of their houses they bemoan the loss of bird habitat. “The condition inside the sanctuary is absolutely pitiable. The water remains polluted with the number of bird visitors dwindling by the day,” Gupta says.

With inputs from Kumar SambhavShrivastava