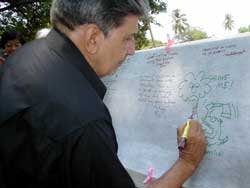 What started as a plan to cut some 37 trees, including large canopy rain trees, along one of Panaji's most scenic riverfront roads between Campal and Miramar, ended with some unusual protests by citizens, and an embarrassing climbdown for the Bharatiya Janata Party (bjp) government. In about three weeks of hectic campaigning, a group of largely middleclass citizens thwarted the government's action to widen the Campal-Miramar road. The campaign, though, was more than just that. It was a caution notice to governments present and future of Goa.

Goa has seen a considerable loss of its green areas (although official figures tell another tale) over the past four decades. Since colonial rule ended in 1961, there has been hardly any increase in the area under urban parks. One of the points that the campaign sought to drive home is that the government cannot improve Goa's abysmal public transport system at the cost of trees.

Microbiologist and environmentalist Nandkumar Kamat was one of the first to raise an alert over the government's plans. Kamat, who recently headed the official one-man committee to study privatisation of beach facilities at Miramar and vetoed the plan, said, "The most shocking aspect is that the public works department (pwd) considers the trees a removable nuisance."

He pointed to a World Wildlife Fund study of some 907 trees in Panaji. Among the most beautiful species identified in this former Portuguese colony was the rain tree (also known as the 'monkey pod tree' because its seed looks like the fingers of a monkey). Samanea saman (or Enterolobium saman ) has a huge canopy, and is conserved in Hawaii, Brazil, Argentina, Thailand and Philippines.

Some 22 of these majestic rain trees were to be axed. "Some are 90 years old, like the ones near the indoor stadium," he said. A number of these trees were planted during the Portuguese colonial period, and Kamat terms them 'irreplaceable arboreal wealth'. He believes these trees are some of the largest specimens in Asia, imported from Latin America by the Portuguese.

The protest, held in the upper middleclass suburb of Panaji, is particularly unique in the manner in which it was conducted. The campaign also went on to cause some amount of controversy. There was an air of music and celebration, even as citizens protested peacefully. Of course, the protest had its share of detractors, like Goa University microbiology professor Joe D'Souza, who said, "To add a nail to the coffin of our woes, the call given by non-governmental organisations (ngos) in support of trees turned into a tamasha and a musical extravaganza rather than emerge as a determined bid to save Goan society."

Interestingly, this is not the first time that the Campal locality has vocalised strong reservations against plans to cut down trees. In the late 1990s, there were strong protests against such plans. Journalist Cyril D'Cunha argues that the road being widened has hardly seen any traffic jams. "Is it a pocket-widening scam?" he asked, referring to the powerful contractor-politician-bureaucrat nexus in the state. Engineer Sylvester D'Souza of Dona Paula argues that there are traffic jams in the area, but they are caused "not so much due to the width of the road as the poor traffic planning".

However, this view too has a number of opponents in the state. The local daily Gomantak Times editorial on March 19 said, "There is no point crying hoarse about greenery because there are experts who know (the) requirements of social or urban forestry." Says Goa University political scientist and former journalist Aureliano Fernandes, "The coming together of citizens is a positive development as far as social capital is concerned...(But) in Miramar, a handful of people are involved in protecting their backyards. This is environmentalism disguised... another case of middle-class selfishness."

Captain Leo Lobo, general secretary of the People's Movement for Civic Action (pmca), one of the civic groups leading the campaign, asked some pointed questions. Was it "absolutely necessary" to widen this stretch of road? Was the cause of traffic congestion studied? How would the project affect people living on either side of the road? Given the high cost of the project, were any low cost solutions explored? pmca concluded with an alternate traffic plan to tackle the situationin the area.

Patricia Pinto -- civic campaigner, also on the Panjim municipal council -- argues that trees along Panjim's avenues that fell have been replaced "by trees that do not blend with the surroundings". For instance, rain trees have been replaced by badam trees. Botanical Society of Goa's Hemant Y Kara-purkar, a former senior government servant himself, says that while he does not wish to glorify colonialism, the Portuguese rulers of Goa "introduced various types of trees into Goa -- coconut, mango, ficus and mixed tree-lined avenues were a common sight." Those days, there were fewer roads and less people, he points out.

Karapurkar points out that a problem today is avenues of monoculture -- like avenues with only Australian acacia or gulmohar trees. "Perhaps more socially acceptable trees, mango, tamarind and jamun trees will find their way into avenue planting," he adds.

On March 13, citizens sent this petition to chief minister Manohar Parrikar, who is also the member of legislative assembly (mla) for Panaji. It stated, "We believe the government's decision is ill-conceived. It may resolve traffic problems on the Miramar road for a few years at best, but it is not a long-term solution to traffic congestion." It suggested enforcing traffic discipline and other means to reduce the congestion. Parrikar sought to give an assurance that no tree will be "unnecessarily axed". However, snubbing the outcry from environmentalists and ngos, he said, "These are mere attempts at raising a controversy...some groups have political interests."

Possibly because the protestors were urban and affluent citizens, the Goan media went into overdrive. Advertising world guru Bal B Mundkur angrily wrote to local newspaper The Navhind Times , offering a Rs 25,000 donation to "start the ball rolling" for a Save Campal's Rain Trees Fund. Protests on March 17 included famed cartoonist Mario Miranda doing sketches, and others chipping in with poems, drama, "balloon magic", art. This storm raised concerns from a far wider circle than just the few names known for taking up environmental issues in Goa.

The municipal council replied on March 19, "This council has not passed any resolution, nor issued any permission, for carrying out proposed widening of the road, which involves cutting of footpath and trees...The matter was taken up by the chairperson of this council with the chief minister, who clarified that there was no proposal for cutting trees along the road."

The government said it was keeping the project "in abeyance" in view of the "concern" about tree cutting. But it argued that the road was "just" a two-lane stretch, while the adjoining stretches (including the newer Miramar-Dona Paula section) are four-lane roads. The protest, evidently, does not end with one small victory.