How, and where, does arsenic contaminate groundwater? The theories differ 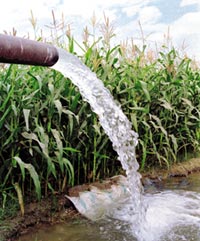 There is no doubt that arsenic is present in Ballia. But why is it there? Is there anything common between the geology of this place and West Bengal, or any other affected area? Why aren't natural arsenic poisoning cases reported from Delhi or Mumbai on a widescale? Why are most affected areas reported to date located near the Ganga?

The questions are endless. So are the answers, in the form of scientific theories on which there is no consensus.

Essentially, there are two main theories and then many sub theories on whether arsenic in groundwater is due to human activities or naturally present and whether it is found in water because of certain soil conditions or is aggravated through human intervention. Unfortunately, the world of science has been so lost in its 'pet thesis' that it has forgotten the human face of this tragedy. The key issue is to understand what scientists believe is the reason for the cause of arsenic and what this explains in terms of its extent. Science must help policy to determine where to begin its search for arsenic. And why?


Many scientists believe that extensive use of lead arsenate and copper arsenite as rodenticides and pesticides is responsible for arsenic contamination of groundwater. In a paper, 'Genesis of arsenic in groundwater delta -- an anthropogenic model', published in the Journal of Human Settlements, hydrogeologists P K Sikdar and S Banerjee state that 'arsenicals' dissolve in rainwater and then percolate down into the aquifers. Their theory is supported by other eminent scientists like K C Sahu, a retired professor of Indian Institute of Technology, Mumbai, who was the first to relate arsenic in water to the disease, and Subrata Sinha, former deputy director general of the Geological Survey of India. Sahu also believes that arsenic is emitted from coal combustion in power plants and carried by rivers as it is non-degradable.

Moreover, in the river basin, owing to the widespread area, arsenic is traceable in minute quantities -- it gets scattered. But in the deltaic region, due to the narrower area, its concentration is found to be very high.


The proponents of the second theory -- arsenic is present naturally in the geology -- are many. They say that arsenic originates in the Himalayan headwaters of the Ganga and Brahmaputra rivers. Over many decades, the rivers have deposited these arsenic sediments across the Gangetic plains and the Padma-Meghna-Brahmaputra basin. The British Geological Survey (BGS), which has worked on the Bangladesh arsenic problem, says that the correlation between iron and arsenic concentrations in the sediments is the key. "The iron oxides scavenge arsenic from soil solution and river water, building up a store of adsorbed (trapped) arsenic," the BGS researchers write in the report Arsenic contamination of groundwater in Bangladesh. Dipankar Chakraborti, director, School of Environmental Studies, Jadavpur University, West Bengal, further explains that the meandering pattern of the river is responsible for the localised depositions of arsenic-rich sediments along the course of the river. This is why arsenic deposits are not uniformly found but are present in pockets along these different states.

Subhrangsu Kanta Acharyya and Babar Ali Shah, researchers at the department of geological sciences, Jadavpur University, explain that during the early to mid Holocene period -- 10,000-7,500 years ago -- the rapid rise in sea level and high rate of erosion in the Himalaya led to huge sedimentation in this region. In other words, the deltas of Bengal and Bangladesh were created. It is this massive erosion and sedimentation that brought the arsenic down from the mighty mountains.

But still the question is, how does the arsenic trapped inside the sediments leach into the aquifers? That is, why is natural arsenic found in some waters?

Even for this there are two explanations: one theory relies on the reduction (loss of oxygen) process and the other on oxidation (addition of oxygen).


According to the reduction theory, arsenic is adsorbed by iron oxides, which form a part of fine-grained sediments. These sediments are rapidly 'reducing' (losing oxygen) because the rich organic matter (microbes in the sediments) consumes oxygen. When the sediments reduce (lose oxygen), a series of geochemical reactions occur leading to the release of arsenic into the groundwater. The exact processes involved are not yet well understood. But as per BGS researchers, they are likely to involve one or more of the following processes: (a) reduction of strongly adsorbed arsenic to less strongly bound arsenic, which leads to the release of arsenic from iron oxides; (b) iron oxides partially dissolve and release iron as well as the adsorbed arsenic; (c) the iron oxides undergo changes leading to the desorption (release) of arsenic.

Acharyya explains that "arsenic gets preferentially entrapped in the organic-rich clayey floodplain and delta sediments and therefore any delta or floodplain that developed into marshland or swamp is prone to contain arsenic contaminated groundwater." A 2004 paper in the British journal Nature supports this theory, arguing that anaerobic-metal reducing bacteria can play a key role in the mobilisation of arsenic in the sediments. According to this research, arsenic release takes place after iron reduction -- release of iron in anaerobic conditions -- rather than occurring simultaneously with changes in the iron oxides.


The other set of researchers believes that the oxidation of iron releases the arsenic in the sediments. These researchers hold that arsenic is present in pyrites -- iron-containing rocks -- that are deposited in the aquifer sediments. When the iron is exposed to oxygen, its capacity to adsorb arsenic reduces, and therefore the toxic chemical starts leaching into the aquifers. This hypothesis is called the pyrite oxidation thesis.

Chakraborti proposes that oxygen enters the aquifer because of heavy groundwater withdrawal, favouring the oxidation of arsenic-rich iron sulphide, which in turn mobilises the toxic element into the water.

But some researchers say that the oxidation theory fails to explain arsenic contamination in deep aquifers, where oxygen cannot reach. In a paper published in the US journal Science in 2002, they propound organic carbon reduction theory to explain contamination in these aquifers: dissolved carbon in the waters of some regions combines with iron hydroxides rich in arsenic. When these oxides embrace carbon, they simultaneously liberate arsenic, which in turn contaminates the aquifers.


These theories should help explain the extent of arsenic in the country. If the first theory -- humanmade -- is accepted, then the region will be as extensive as the use of the contaminants.

The second theory of natural arsenic places the possible extent in areas traversed by the Himalayan rivers -- from the Terai region of Nepal to the Bengal-Bangladesh delta. But in this extent, the levels may vary. For instance, Chakraborti writes in a recent paper that "the entire Gangetic plain may not be uniformly affected, despite our expectations that groundwater will be arsenic contaminated over a wide range."

The question now is where will this natural arsenic be released or mobilised? If the reduction theory is accepted then the arsenic will be released naturally. Therefore, according to Acharyya, "local arsenic affected pockets may also occur in northern fan areas as recorded from the Terai region of Nepal. Further studies should focus on Holocene alluvium in entrenched floodplains and iron-rich groundwater as the target areas for arsenic pollution."

Added to this is the question whether the oxygen entering the aquifers (because of groundwater withdrawal) precipitates this natural process. In a paper published in the US journal Environmental Health Perspectives, Chakraborti and his colleagues explain this saying, "whether the huge groundwater withdrawal pivotal to the Green Revolution allows oxygen to enter into the aquifer, initiating microbial activities, or has any relation to localised increases in arsenic mobilisation, is yet to be understood."