Ancient roots of a modern holiday

When May Day meant rebirth of the soil

Ancient roots of a modern holiday

In ancient and medieval Europe, May signalled the onset of spring. It meant the onset of the warmer part of the year. For most people it was time to end winter hibernation, and reconnect with friends and loved ones. It was the time of festivities.

Before Christianity took root, the Celts and Saxons celebrated May 1 as Beltane or the day of  Bel, the Celtic god of sun and fire. To honour the fire god, torch bearing peasants and villagers would climb top of hills or mountain crags and light wooden wheels, which they would roll into the fields below. The celebrations signified the soil's return to fertility, after a long—and usually exacting—winter. Cattle were driven through the smoke of the Beltane fires, and blessed with health and fertility for the coming year. 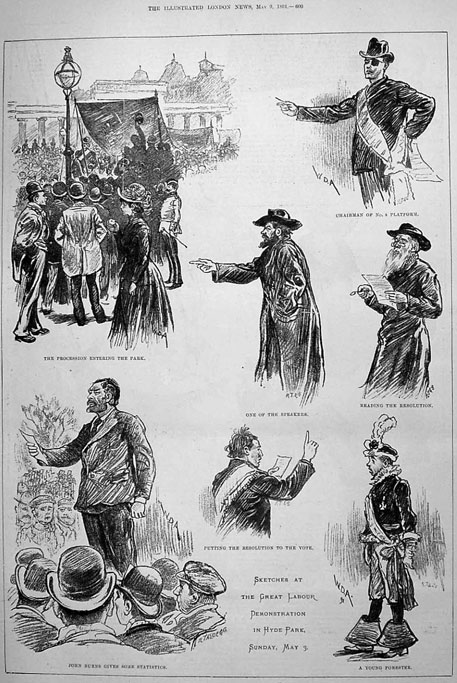 The festivities began with Celtic communities selecting a virgin as “May Queen” to lead the march to the top of the hill. She represented the virgin goddess on the eve of her transition from Maiden to Mother.  Her consort was variously called,  “Jack-in-the-Green”,  “Green Man,” “May Groom” or “May King”.  He would be the king or  priest for a day. But May Day was also a day of social inversion. So the symbolic lord would be butt of the much humour and ridicule—the sort peasants could only murmur about their their real lords.

In less agrarian societies this one-day chief was called the King Stag. He had to run through the woods with a pack of deer in tow. Only after he had successfully locked antlers with and killed a stag, could the King Stag return to the festival and claim his right as consort to the May Queen.The union of the Queen and her consort symbolised the fertility and revitalisation of the world.

Usually, the festivities involved the raising of a Maypole around which young single men and women would dance. Historians believe the Maypole to be a phallic symbol, but many Celtic communities regarded the pole as  pathway by which demons trapped in the earth could climb to the surface—and from there escape to heaven. They set up maypoles as a way of releasing evil spirits from their prison in the earth. Historians see this as another symbolisation of the rebirth of the soil. 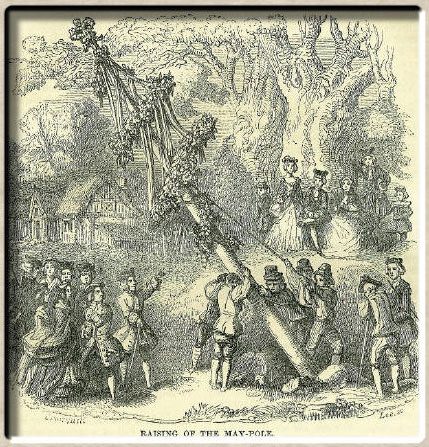 Christianity scoffed at this tradition. The observances were outlawed in many parts of Europe. But like many pagan observances, the church could not root out Beltane festivities. Every year, Christian priests would lament the number of virgins despoiled on Belane, but the peasants ignored the jibes. They believed babies born from a Beltane union were blessed.

While it failed to root out the festivities, the church tried to assimilate the May I festivities. I some places, May Day became Mary's Day—the May Queen became virgin Mary. Some Catholic priests preached that Christ was crucified on a Maypole.

Around the 15th century, the Church gave its blessings to less riotous celebration: the Mayfayre, later known as the May Fair. For traders and artisan's guilds, the fair became a chance to display their wares.

When industrialisation took roots in Europe, most workers had roots in rural areas. They came from peasant and artisan families. In the late 19th century, the festival of pagan origins  became associated with the struggle for an eight-hour working day. On May 1, 1890,  the leaders of the Socialist Second International called for an international day of protest. They did so just as the American Federation of Labour was planning its own demonstration on the same date. Both protests were hugely sucessful.

Initially, May Day was intended to be a one-off protest, and perhaps a solemn affair. But with trade unionism flourishing, May Day  developed a carnivalesque character—somewhat akin to its pagan roots. May Day celebrated working class solidarity with the paraphernalia of badges, flags, art, sporting events, fairs and heavy drinking. Historian Eric Hobsbawm calls May Day, the only unquestionable dent made by a secular movement on the Christian calendar.

But like the Christian church, the modern state was quick to assimilate the symbolism of May Day. May 1 is a holiday in many parts of the capitalist world. And, according to Hobsbawm, Nazi Germany one of the first few countries to declare May I as a paid holiday.