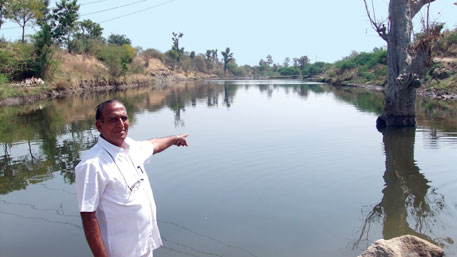 Suresh Khanapurkar, a retired geologist, is a staunch RSS supporter and Amrish Patel is a Congress leader in Maharashtra. But their conflicting political ideologies did not stop them from joining hands to quench the thirst of a drought-prone region in the state. In 2004, they started work to provide irrigation and drinking water to 35 of the 149 villages in Shirpur taluka of the state’s Dhule district.

Their hard work over the past eight years has resulted in steady increase of the once-depleting groundwater level. Farmers, who used to migrate after monsoons in search of work, now stay on in their villages to grow two crops a year, instead of one crop. What’s more, drinking water is available to all households in the villages, thanks to installation of pond pumps.

The money for their effort comes from the profits of a cooperative cotton mill started by Patel. Since 2004, Rs 6.55 crore has been spent on their project which spreads across 150 sq km.

The region is mostly dry, receiving south-west monsoon for a short period. About 75 per cent of the rainfall occurs during 13 of the total 36 days, and surface water sources are unevenly distributed. Irrigation projects cover only a small area in the south-eastern part of the taluka.

Geologically, a third of the total area of Shirpur is covered by Tapi alluvium and the rest by Deccan basalt. Tapi alluvium is composed of alternate layers of yellow silt, sand and boulders, while Deccan basalt has levels of weathered, hard massive basalt. Aquifers are present at various levels in both the belts, but alluvium takes more time than basalt to recharge an acquifer.

“About 30,000 farmers used to indiscriminately withdraw groundwater from the system to grow crops,” says Khanapurkar. In the absence of any regulatory measures, groundwater was being extensively exploited, resulting in its fall. “Drinking water schemes were the first casualty,” says Khanapurkar. Due to the decline in groundwater, dug wells in the Tapi alluvium belt dried up in 1990. Since alternate layers of silt in alluvium pass on very little water, the situation was becoming critical with each passing day. Even after heavy rainfall the wells were dry. “This clearly showed that there was little lateral and vertical percolation of water through the yellow silt,” says Khanapurkar.

In the basalt belt, due to the nature of rainfall (heavy rainfall in short duration) runoff and little percolation, aquifers hardly got saturated despite having effective porosity. “Because of this dug and bore wells in the region had water only till December,” says Khanapurkar. Drying of wells in the alluvial belt and insufficient availability of water after December in the basalt region were the main problems of Shirpur, he adds.

Let there be water

After studying all the geological aspects of the region, Khanapurkar chalked out a plan—angioplasty in water conservation. Fourteen small streams in the project area were widened five metres to 30 m and deepened from 10 m to 15 m. “It is like a surgeon widening blood vessels for adequate blood supply. Hence, the project’s name,” says Khanapurkar. The extension removed the impervious layer of yellow soil and hard massive trap of basalt. They also built 65 cement bunds on the streams. Their minimum storage capacity is 280 million cubic metre (MCM) while maximum is 4,240 MCM, informs Khanapurkar.

The water revolution has drastically changed the lives of the farmers in the taluka. Their average per capita income has increased by Rs 1 lakh per hectare annually. Farmers are harvesting double crop in rainfed and non-command areas. Low energy pond pumps have decreased power consumption of the villages as they run on diesel. Many farmers have also started fishing in the nullahs, which provides an additional source of income. Atmaram Rathod and his brother, Premraj, who own a hectare in village Nageshwar Bangla, used to work in Pune to support their family of six. Since the project was initiated, they have started cultivating groundnut, tomato, brinjal and cotton on their land. They earn Rs 4 lakh per year as opposed to Rs 1 lakh after toiling in Pune. “We used to grow bajra in our farm, that too when rainfall was sufficient. Rest of the year, we used to do petty jobs in big cities,” recalls Premraj Rathod.

Surendrasingh Rajput owns four hectares in his village Godi. Till 2008, he used to earn Rs 30,000 every year from farming. “My fortune changed in 2008 when the nullah adjoining my farm held water throughout the year. It was first time in my life that the nullah did not dry after monsoons,” he recalls.

Khanapurkar says if his water conservation model is adopted in the entire state, villages in non-command and rainfed areas will be able to grow two crops a year. “If the project is implemented everywhere, there will be no incident of farmer suicide,” he believes.