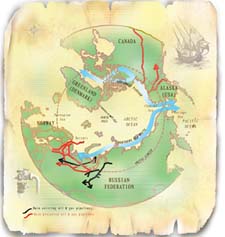 In 1937, Ivan Papanin led an expedition that planted the Soviet flag on the North Pole. He was feted by Stalin and lionised as a Soviet hero. In early August this year, the Kremlin honoured Artur Chilingarov similarly after the deputy leader of the Russian Duma had led two mini-submarines to the bottom of the Arctic Ocean beneath the North Pole and planted the Russian flag there. Call it the sweepstakes of global warming. As ice caps recede, old imperial ambitions over the Arctic have been rekindled. There has been a string of expeditions to the region by five countries bordering the region Canada, Denmark, Norway, Russia and the us.

A lot of this activity is motivated by the desire to control shipping routes, which might be in business once the Arctic ice melts away. The Northwest Passage along the northern coast of North America, for example, could connect the Atlantic and Pacific Oceans, reducing travel time considerably.It could decrease the trip between the two oceans by thousands of miles compared to the current route via the Panama Canal.

There is the much more lucrative prospect of controlling oil, gas and minerals beneath the Arctic Sea bed that the ice layer had hitherto made inaccessible. In 2000, a us Geological Survey study estimated that the Arctic holds 25 per cent of world's remaining oil reserves. But a joint study by the Scottish energy consultants, Wood Mackenzie and the Dutch firm Fugro-Robertson in November last year found that the Arctic's oil potential significantly less than previous estimates. Titled Future of the Arctic, the study estimated that gas constitutes 80 per cent of hydrocarbon resources in the region.

The Mackenzie and Robertson study has, however, failed to deter the recent Arctic rush. Days after the Russian flag-planting exercise, Canada's prime minister, Stephen Harper announced plans to defend his country's stakes in the Arctic. He mooted a military centre in Resolute and a deep-water docking facility in the Nanisivik mine, both in the Canadian Arctic territory of Nunavut. Earlier, in July, the Canadian government announced that it would build six to eight patrol ships to assert its sovereignty over the Northwest Passage.

Denmark has also jacked up its activity in the region. On August 12, Danish researchers set sail on a month-long voyage to collect geological data from the Arctic that would form the basis for a future claim. And on August 17, the us Coast Guard vessel Cutter Healy set sail with about 20 scientists to map the sea floor on the northern Chukchi Cap in the Arctic--the third expedition of its kind. The earlier two happened in 2003 and 2004.
Canada, Denmark (through its autonomous province Greenland) and Russia are claiming the Lomonosov Ridge, an underwater mountain range as a natural extension to their respective continental shelves. Norway is claiming areas in the Barents Sea, Arctic Ocean and Norwegian Sea. It has a border dispute between in the Barents Sea with Russia, which still has to ratify an agreement with the us over the Bering Sea. The us, in turn disputes Canada's claims over the Northwest Passage.

There is a legal framework to deal with this maze of claims. But the processes of this framework, administered by the un Convention on the Law of the Sea, are nebulous and largely untested in the Arctic (see box Dispute settling mechanism). Already there is talk of a separate treaty for the Arctic on similar lines as that for the Antarctic.wwf has said that the Convention is inadequate for managing shipping routes, and the exploration of fossil fuels and minerals in the Arctic. It has called for an Arctic treaty and a multilateral body to guarantee sustainable development in the region.

There is also the possibility of some disputes being referred to other un bodies. Particularly so when more than one country has claims over an area the dispute between Norway and Russia over the Barents Sea is a case in point. In such cases, disputes can be submitted to the International Tribunal for the Law of the Sea established under the convention or to the International Court of Justice.

The Arctic rush is, however, not just a matter of economic, legal or political ramifications. There will be important social and environmental impacts. A report by the United Nations Environment Programme in June this year, for example, raised concerns over the growth in Arctic tourism, particularly its negative impact on the environment and local communities. The number of tourists to the Arctic has risen from about 1 million in the early 1990s to more than 1.5 million today. Exploration of oil, gas, petroleum and mineral deposits has already begun in some areas, notably in the us (Alaska) and Russia; the resulting impacts on environment are being felt.