As light as gas

The most fuel-efficient mass transport vehicle comes a close second

As light as gas 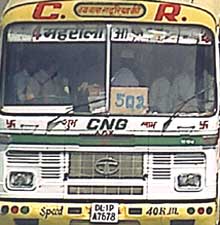 Among the vehicles that dot Delhi's roads in the aftermath of the Supreme Court's ruling to convert diesel buses to compressed natural gas (cng) is Tata's lpo 1510 cgs bus. The vehicle gets the second position in the ratings and has several advantages.

The bus has scored the highest points in fuel efficiency criterion, which translates into low fuel cost for the consumer. This is also due to its small and compact cylinders and its high compression ratio of 10.5. It has a high gross weight per unit displacement (2.53 kg/cc). It also has a closed loop electronics control.

As far as emissions are concerned, the model scores very high. This is due to the inherent advantages of cng. Its carbon monoxide (co) emissions are 1.68 gramme per kilowatt hour (gm/ kwh). no2 emissions are 3.42 gm/kwh and particulate matter is just 0.03 gm/kwh. Its green initiative has helped in reducing the pollution and indeed given the capital a breathing space.