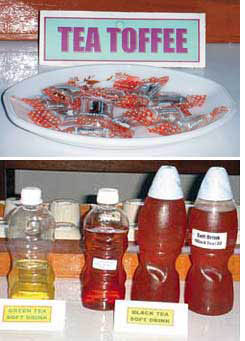 Not in the mood for the standard hot cuppa? How about a cooling, fruity tea drink or a tea toffee? With a diverse range of edible products based on tea extracts set to hit Indian markets, you might soon be spoilt for choice of ways to get your fix.

Scientists from the Tea Research Association of Assam, who have been experimenting with diversifying the use of tea leaves for the past five years, have developed a series of products including low-cost black and green tea-based soft drinks, and tea pills that you can drop into a cup of hot water and even toffees. The experiments kicked off in 2002 after the Tea Board of India awarded the association a project to look into the alternative uses of tea.

"The idea is to popularize tea among non-tea drinkers," says Mridul Hazarika, director of the Tocklai Experimental Station at Jorhat, where the research is being conducted.

The soft drink and the tablet are both made from tea infusions.The tablet is a compressed form of tea extract with additives. It can be chewed or dropped into hot water and sipped and has the same refreshing effect like a steaming cup of tea, says Hazarika. It has already received a provisional patent. The drink, which also comes in a variety of fruit and spice flavours and has added sugar and edible organic acids, will cost about Rs 2. Researchers say apart from the high caffeine content, which acts as a stimulant, the drink also has several health benefits. It contains Thiamine (vitamin b1)--which helps the body convert food into energy and polyphenols that act as antioxidants.Since they are based on leaf extracts, these products are also expected to improve the market value of lower-grade tea leaves.

Similar tea-based products designed in the past, however, have failed to make any lasting impact. But the researchers believe things will be different this time round. "These products will be based on Assam tea, which is known worldwide for its quality and high polyphenol (35 per cent) and caffeine presence," says Lakshi Bhuyan, a scientist working on the project. Several entrepreneurs have already approached the station looking to buy the technology used to make these products. Local tea traders are also expressing interest in the products.