Typhoid could have caused the fall of the powerful city state during the Peloponnesian wars, says a new study 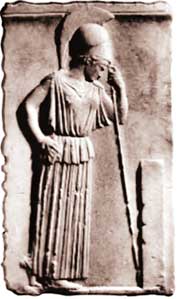 The Peloponnesian war has baffled historians for long. Among the epic conflicts of the ancient world, the war pitted the Greek city states of Athens and Sparta against each other. The seagoing Athenians met their match in the Spartans and their allies during a conflict that stretched from 431 bc to 404 bc. Led by the doughty Pericles, the Athenians held sway for much of the war, till a mysterious disease changed the balance of power. Based on the chronicles of Thucydides, historians have attributed Athens' defeat to a range of pathogens: Ebola fever, typhoid, anthrax, plague, smallpox, tuberculosis and measles.

Thucydides, a participant of the Peloponnesian war himself, also contracted the mysterious disease, but lived to describe the downfall of his country people. Healthy people were seized by "violent heat" in the head, their throats and tongues became bloody-red, and they emitted a "fetid" smell. Sneezing bouts, hoarseness of voice and painful coughing followed the initial symptoms. Stomach upsets and dry retching came next. Though there was no appreciable rise in body temperatures, "reddish and livid pustules and ulcers" appeared all over the sick. According to some estimates, the disease consumed more than 10,000 people -- more than a third of the population of Athens. It left severe scars on the survivors: some lost fingers, others their toes and few others were blinded. Pericles himself caught the disease, and although he survived it, he died a year later, probably due to its lingering effect.

The symptoms described by Thucydides could be that of several diseases. But now there are sufficient clues that have helped identify the pestilence as typhoid. Recent findings from a mass grave in the ancient cemetery of Kerameikos in central Athens show that the disease might have hastened Athens's downfall in the Peloponnesian war. The burial site -- similar to the ones described by Thucydides was uncovered in 1994. The dead bodies were laid in a disorderly fashion in more than five layers. Though the people in the lower layers were buried carefully, those in the upper levels were virtually heaped one upon the other -- very unlike the careful manner in which the Greek buried their dead. It was as if the authorities had hurriedly buried the bodies to protect to surviving population from the disease. But besides indicating the speed at which the disease had swooped on the Athenians, the graves were of little help.

This was till a team of researchers from the Athens University decided to study the bodies. Coordinated by Manolis Papagrigorakis from the University's School of Dentistry, the team also comprised geneticist Christos Yiapitzakis, orthodontist Philippos Synodinos and archaeologist Effi Baziotopoulou-Valavani. The four decided to use dental pulp from three teeth chosen at random for their investigations. It was an apt choice. Dental pulp is made up of living tissue and traps micro-organisms during infections.

The scientists used a technique called polymerase chain reaction to amplify the dna of the dead. The dna was compared with that of genetic material of agents causing plague (Yersinia pestis), typhus (Rickettsia prowazekii), anthrax (Bacillus anthracis), tuberculosis (Mycobacterium tuberculosis), cat-scratch disease (Bartonella henselae) and typhoid (Salmonella enterica serovar Typhi) -- all included in the diseases shortlisted by experts on the basis of Thucydides's description. The team found similarity in the genetic material from the teeth and that of typhoid bacteria. This result was verified using another section of the genetic material. To overrule infection by other salmonella variants, the researchers tested the genetic material on the closest relative of the typhoid causing bacterium: Salmonella typhimurium. The tests negated the possibility of other infections.

The study will be published in the International Journal of Infectious Diseases and is currently available online.


The University of Athens' researchers believe the pestilence may have been the result of a military strategy devised by the Athenians' leader, Pericles. To counter a Spartan offensive, Pericles evacuated people from parts of the city and sheltered them behind fortifications. Gathering tens of thousands of people in overcrowded and unsanitary conditions created the perfect atmosphere in which infectious disease could spread, researchers say.


Certain symptoms of typhoid fever, rash and the diarrhoea, are quite similar to those described by Thucydides. But others like the suddenness of the disease is not consistent with the symptoms, typhoid displays currently. These differences are perhaps due to possible mutations in typhoid fever over time: the disease does not manifest itself in the same manner now. The University of Athens researchers speculate that differences between the ancient and present day S enterica serovar Typhi strains, may partly account for the variations in symptoms. "Inaccuracies in Thucydides' description are also possible . This will be investigated later," said Papagrigorakis.

Meanwhile, the researchers are not taking any chances. "We have not excluded the possibility of the concurrent existence of another pathogen as well," Papagrigorakis said. Further investigations of dna material will be needed to confirm the finding, he added.

Meanwhile, the study has become somewhat of a landmark. "Historical aspects of infectious diseases can be a powerful tool for several disciplines. This report is of outstanding importance for many fields, since it sheds light to one of the most debated enigmas in medical history," notes Papagrigorakis.