A surgical technique developed by an ayurvedic team has drastically curtailed incidence of dracontiasis, a disease caused by guinea worms, in southern Rajasthan. So successful is the technique, the team's leaders were invited to Africa last year to teach it to the doctors there. 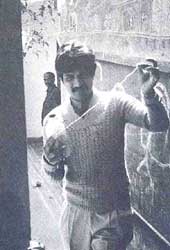 AT 3JAMAKUthe daughter of Laxman Meena of Khodi Mahogodi village in Udaipur districtwas the youngest dracontiasis -- a disease caused by guinea worms (Dracunculus medinensis) -- patient in Rajasthan. She was cured last year by a surgical technique developed by an ayurvedic team led by Bhanwar Lal Sharma and sponsored by the Sanitation Water And Community Health (SWACH).

The SWACH project of the Rajasthan governmentaided by UNICEF and SIDA (Swedish International Development Agency)was launched in 1986 in the southern Rajasthan districts of BanswaraDungarpurUdaipur and Rajsamanda region dominated by Bhil and Gadasiya tribals who constitute 75 per cent of the population. The traditional ayurvedic surgical method involves using a blade and a needle to hook out the guinea wormbut the SWACH team has developed a medical kit that contains anaesthesia equipmentsterilised surgical tools and masks.

The SWACH project seems to have yielded spectacular results. "Last yearthere was zero incidence of the disease in Banswara and so will be in Udaipur and Dungarpur by 1994 where there are less than 400 and 600 patients respectivelysays SWACH project officer Pratap Chand Kumbat.

Naru larvae are released into stagnant water by an infected person. The worm releases upto 30 lakh larvae at a time and they are ingested by water cyclops (a microorganism), which enter the human body if the water is used for drinking. Cyclops dies in the human body but not the naru larvae, which penetrate the stomach lining and enter body tissues where they mature and then find their way to the skin. There, the larva secretes a substance that causes severe itching and results in a break in the skin through scratching. It also causes an allergic reaction, a rash and fever. Because water is soothing, the tormented patient seeks relief in open water, which results in the naru ejecting more larvae and starting the entire process once again.

The root cause for naru was the lack of potable watersays Sharma.The people have traditionally been drinking water from babadis (stepped wells) or nadis (ponds) and these are vehicles that spread the disease."

Sharmawho claims to have cured 25800patients and extracted an estimated 430worms so farsays the peak season for the disease is summerbut as this is also the peak season for agricultural activitiesnaru outbreaks also hurt the patients economically.
In 1987a SWACH team surveyed the project area and determined there were 1731naru patients. They chalked out a containment strategy combining incentive-linked reporting of naru casessurgical extraction of the worm and converting step-wells into pulley-equipped draw-wells. "To begin with we organised an army of paramedical workers and women animators (two or three from each village) to spread our messageexplained Kumbat.We gave them training in sanitationhygiene and water managementwith emphasis on guinea worm disease."

A team of SWACH surveillance scouts also was set up to facilitate quick reporting of naru cases so that these patients could be speedily treatedusing the surgical extraction method. The scouts -- enthusiastic men and women from every village in the project areawere trained in spotting naru casesproviding preventive treatment and educating the villagers to discourage naru patients from infecting local water sources.

Most of the scouts are illiterate but very intelligent,Kumbat said. "It is because of their hard work that our message was spread rapidly to even remote villages."

SWACH pays Rs 100 as incentive for reporting a naru case in a pre-infective stage and Rs 50 for each post-infective case. The scouts also distribute funnel filters to households and treat unclean water sources with a chemical called Temephos. "The funnel filterexplained Kumbat,was designed by us and it is a device to filter out the larvae-fed cyclops."

Roop Lal of Kelthara village65km away from Udaipursays he was bed-ridden in 1990 for five months by an attack of naru. But after he was curedhe became a scout and so far has reported about 14 naru cases. Nowhe addsthere is no case of naru in his village. Describing project area effortsSharma saidWe cured 608 out of 1008 patients in 1991 and 359 out of 419 in 1992, all at the pre-infective stage. Other cases were treated within 10 days of eruption.

The SWACH team tackled rooting out the key source of disease transmission by converting more than 300step-wells into draw-wells and installing hand-pumps in more than 100 villages. "To prevent the dirty water from seeping into ground waterSWACH assistant project officer Anil Acharya stated,we built a small drain leading to a kitchen garden near the hand-pump. For maintaining the hand-pumpswe train women and give them tools. The concerned block office pays them Rs 150 each per month.".

Another former naru patient who has since become a scout is Payari Devi of Odaka village. She is also a hand-pump mechanic and takes care of four hand-pumps in two villages. Though at times she has to do repair work at night and payment is irregularshe saysI don't mind, as I am doing it for my own people.

A major difficulty that SWACH workers report is monitoring of naru patients who frequently attend marriages and other social functions in other villages. Says SWACH assistant project officerNirmal ChittorThe people infected with the disease visit a number of villages in a year. And, even where the disease has been eradicated, they transmit the disease again.

Kumbat says another handicap the SWACH project faced at the outset was "the stiff opposition from allopaths. They virtually branded our method unscientificbut after a team of doctors from the All India Institute of Medical Sciences in Delhi approved of ittheir opposition subsided."

The SWACH's technique has become so popularSharma and Kumbat went to Ghana and Nigeria last year to train local doctors in the technique. Nowsays SharmaOur method is proving to be a boon for more than one million guinea worm patients in Africa.