By A Biju Kumar 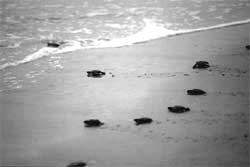 for the last eight years, the villagers of Kolavipalam in Kozhikkode (Calicut) district have been burning midnight oil to ensure the survival of the visiting Olive Ridley turtles. Every year, the turtles come to nest in the 20-km beach, which stretches between Pavyoli and Kottapuzha estuary, some 45 km north of Calicut. But till 1992, the eggs mostly fell prey to stray dogs, jackals and humans, too, till a few youngsters started observing the turtles and reading about them. After learning that they were the Olive Ridley turtles ( Lepidochelys olivacea ), they started guarding turtle nests day and night.

All the 8,000-odd villagers of Kolavipalam joined in the effort to save the turtles. A temporary hatchery was constructed. But it was only when the villagers started keeping the eggs in separate pits that they met success. During 1998-99, 52 turtles visited the beach and the villagers collected 4,501 eggs, of which 3,328 hatched. In the following year, 65 turtles showed up and the number of hatchlings rose to 4,900. The mortality rate of the hatchlings was zero. "We believe that the same group of turtles visit the beach every year, though we have not tagged the turtles as the scientists in the Orissa do. Every year, a turtle with amputated flippers visits our beach," says Dinesh Babu, secretary of the Theeram Prakrithi Samrakshana Samithi (Coastal Environmental Protection Group), a non-governmental organisation that was set up in 1998, in which the majority are local fisherfolk belonging to the Thiyya community.

Many people visit the hatchery during the breeding season. As a favour to the visitors, the hatchlings are kept in an aquarium for a day before they are released into the sea. They have also started mangrove afforestation programmes. Man-groves planted two years ago are now a healthy lot, while those in the nearby villages continue facing destruction.
The Theeram group functions with contributions from the members. From 1998, the Kerala forest department had been contributing towards the salary of six guards for six months, from their World Bank-aided Kerala Forestry Project. Of late, however, it has sanctioned a project worth Rs 4.5 lakh to construct a turtle hatchery at Vallikkunnu in Malappuram district. This despite the fact that Vallikkunnu is not a suitable nesting ground, say scientists from the Kozhikkode-based Western Ghats Regional Station ( wgrs ), Zoological Survey of India.

The major issue, however, is indiscriminate sand mining. The erosion rate is so high that the villagers have been forced to relocate the hatchery four times in the last two years. Consequently, many turtles avoided many new areas because of a change in the topography. Sand mining has also destroyed mangroves near the estuary. K C Gopi and C Radhakrishnan, scientists at wgrs , who have studied the coastline, confirm that the sandy stretch has been denuded of its sand deposits.

Theeram activists fear that if the present trend continues then there will be hardly any area suitable for turtle nesting. Theeram activists filed a case in the Kerala high court in November 1998 to prevent sand mining. The court ordered the district collector to appoint a committee to study the matter. The committee recommended restricted removal of sand. But despite the order, illegal sand mining continues unabated. Now, Theeram has urged the court to initiate contempt of court proceedings.

However, neither mining nor the forest department's plans for an exclusive turtle-breeding site has cowed down the villagers. They have their mind set on future plans, which include launching legal actions to protect the delicate coastline. Says Suresh Babu, president of Theeram: "We're keen to take up tagging if funds are available. We also want to publish a booklet in Malayalam to spread the message along the coastal belt as turtles are killed for meat further south." Meanwhile, they are awaiting clearance of a proposal to declare the area a Marine National Park, which would protect the coast besides boosting the turtle conservation and mangrove afforestation efforts.