People in northeast India fear bamboo flowering. According to an ancient belief when bamboos flower, there is death and destruction. 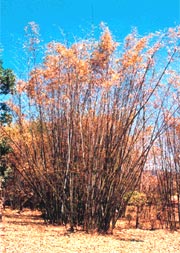 Bamboo flowering is considered a bad omen in several northeastern states of India, especially when accompanied by an increase in rodent population. It is believed to lead to famines and natural calamities. The next bamboo flowering is expected around year 2003-04. Should we prepare ourselves?

On October 29, 1958 the Mizoram district council cautioned the Indian government of impending famine in the state and demanded financial assistance for relief measures. This warning was preceded by bamboo flowering and increase in the rat population in the state.

The Indian government, however, rejected the financial demand on the ground that such anticipation of famines is unscientific. In 1959, the state was reeling under drought and famine.

This belief is older than the Indian epic Mahabharata , written 5000 years ago. In the story, the evil king Jayadrath forcibly abducted Draupadi, the Pandavas wife, and trampled through the forest in his chariot. She cursed the king that he would be destroyed, just as bamboos bring forth instant ruin by their blooming.

Although, the scientific relationship between bamboo flowering and natural calamities needs to be proved, botanists have a theory about what old-timers have known for centuries (see box: The scientific view ).

Bamboos are grasses belonging to the family Gramineae (also called Poaceae), the fifth largest flowering plant family. Several species like rice, wheat, oats, barley and maize belong to this family. Bamboos are, however, perennial grasses classified under the sub-family bambusoideae.

There are around 1200 bamboo species occurring worldwide. India has an abundant bamboo resource including 138 species spread among 24 genera, of which 3 genera are exotic and others are indigenous. Manipur alone has 53 species of bamboo while Arunachal Pradesh has 50 species.

Northeast India supports 63 bamboo species, which are an integral part of the social, cultural and economic life of the people. There are about 1500 documented traditional uses of bamboo from cradle to coffin.
Bamboo shoots and seeds provide food for the people, bamboo stems and leaves provide forage for livestock. People fashion bamboo into hats, baskets, toys, musical instruments, furniture, chopsticks, paper, and weapons.

Bamboo stems are used as fuel wood and to build houses, fences, tools and field implements. Workers scale bamboo scaffolding to construct the tallest buildings in Asia. These flimsy-looking structures are models of resilience, merely swaying in typhoons that can collapse steel frameworks.

A secretion of bamboo, a fine, siliceous matter, called 'tabasheer', found in the stem of bamboos like Phyllostachys bambusoides, is used in Ayurvedic medicines as a cooling tonic, to treat cough and asthma and even as an aphrodisiac.

Culturally too, bamboos are close to the tribal people. People in Assam are careful about not cutting the bamboo on a full moon day or on a Saturday or Tuesday. A flute called 'eloo', made from the bamboo species, Dendrocalamus tulda, is played by the priest during the 'Dree festival' to drive away evil spirits.

Bamboo is also used in soil conservation. The bamboo plant has an underground rhizome and root system. Above the ground, the aerial portion of the bamboo plant has the shoot system, which consists of the stem, branches, leaves and the inflorescence or bunches of flowers.

Bamboos exhibit monocarpic flowering behaviour. This means, the bamboo dies after flowering. Like other grass, bamboo flowers are tiny and borne on compound inflorescences. Fertilisation takes place after pollination and results in the formation of the seed.

They theorise that the rhizomes of the bamboo have some kind of "memory" or an imperturbable inner clock ticking away until the preset alarm goes off simultaneously. In this quiet cacophony, all the bamboo plants burst into bloom simultaneously. After flowering, they all die in some kind of a "mass suicide." Dying after flowering is a characteristic phenomenon of monocarpic flowering, which bamboos share as a member of the grass family.

Based on this flowering behaviour, bamboos can be classified into three groups. Those bamboo species that flower annually or nearly so, bamboos with gregarious and periodic flowering and bamboos with irregular flowering patterns. Most woody bamboos are semelparaous, flowering gregariously, seeding at long intervals of many years and dying thereafter. The seeds thus produced after long intervals have an extremely short life. The time interval between two successive flowerings is species specific.

In Schizostachyum elegantissimum , (a Javanese species), and Arundinaria wightiana, the period is three years. In Phyllostachys bambusoides , a Chinese species, it is 120 years while Bambusa vulgaris has a cycle of 150 years. The next bamboo flowering in northeast India is expected around year 2003-04.The mysterious pattern of bamboo flowering does not fit within the parameters of popular flowering theories in which environmental factors such as photoperiod, temperature and stress plays an important role. The en masse post-flowering death of bamboos has disastrous consequences, both ecological and economical.

The flowering and seeding at long intervals makes the propagation of bamboos through seeds and improvement by hybridisation difficult. It also threatens wild life, in particular the Giant Panda in China, which lives almost exclusively on bamboo shoots.

Considering the intimate relationship between bamboos and the Asian people, the government of India is, for once, taking the phenomenon of bamboo flowering seriously.


The Planning Commission is working on an emergency plan to combat the likely consequences of bamboo flowering, expected around 2003-04, especially in Mizoram, where 49 per cent of the geographical area is covered by bamboo plants.

A bamboo policy, the first of its kind in the country, is being formulated for the state of Mizoram. This would be a working plan to tackle issues like bamboo harvesting. The union government has also directed the state administration to increase food stocks and to store these provisions in rodent-proof silos.

Mizoram too, is taking preparatory measures. It has suggested cutting down bamboo plants, which will be economically exploited. The Planning Commission has sanctioned Rs 4 crore to establish a bamboo-processing unit.

To combat the menace of rats following bamboo flowering, the local administration plans to initiate offering a monetary reward for every rat killed. Similar incentives in the past resulted in villagers killing more than 2.5 million rats annually at the peak of flowering.

Officials are also debating measures, such as replacing flowering varieties of bamboo with non-flowering ones. Botanists, however, believe that the only way to avert famines, associated with bamboo flowering, is to teach farmers to plant crops that rats do not eat, such as ginger and turmeric, during the periods when vast fields of bamboo are expected to flower.

Whether these measures will work, only time will tell.