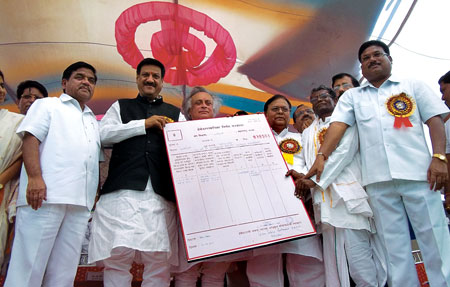 Following the historic forest rights victory on April 27, mood in Mendha Lekha is upbeat. Gram sabha of this village in Maharashtra’s Gadchiroli district started felling about 90,000 bamboos a day after winning the right to harvest and sell the minor forest produce (MFP).

With transit passes in hand, the gram sabha awarded the contract for buying the felled bamboos to a local contractor. The passes are required to transport bamboo out of the village. Over 3,000 people gathered to witness the state forest department handing over the transit passbook to Devaji Tofa, leader of the Mendha Lekha community. Those present included Union Minister of State for Environment and Forests Jairam Ramesh, Maharashtra chief minister Prithviraj Chavan and state home minister R R Patil (see ‘Rural communities win right over bamboo, finally’ on www.downtoearth.org.in).

Each bamboo pole will be sold at Rs 23, which means the village will earn Rs 20.7 lakh in one season. The price of bamboo has two components; Rs 9 will be given as wage for felling and cleaning a pole and the remaining Rs 14 will go to the gram sabha. About 200 people are taking part in the felling and cleaning operation. If a worker fells and cleans 50 to 80 bamboo poles in a day, he will earn Rs 450 to Rs 720.

At the rate of Rs 14, the gram sabha will earn Rs 12.6 lakh, while wages worth Rs 8.10 lakh will go to individual residents. “This shows how much direct wealth can be generated by giving gram sabhas rights over MFP,” says Mohan Hirabai Hiralal of non-profit Vrikshamitra, who has been staunchly fighting for Mendha Lekha’s forest rights. In the rest of Gadchiroli, the wage for felling and cleaning a bamboo pole is Rs 3.

Till January this year, 3,628 community rights titles have been distributed in the country, which is just 0.3 per cent of the total titles given under the Forest Rights Act (FRA) of 2008. “Of all the community claims settled, there are only four to five cases, including Mendha Lekha, where the community’s right to protect and manage the community forest resource (Section 3.1.i of FRA) has been recognised,” says N C Saxena, chairperson of the National Forest Rights Act Committee. “In many states this right has not even been included in the claim forms,” he adds.

Gadchiroli is being treated as a model in Maharashtra as an impressive 623 community forest rights claims have been cleared in the district since 2009. The fact is that besides Mendha Lekha and Marda, “not a single village has been granted right to protect and manage community forest resource,” says Keshav Gurnule of non-profit Srushti, which is fighting for people’s forest rights in the region. What’s more, the claims come saddled with conditions, including those that compel the gram sabha to work in accordance with the forest department’s working plans—a violation of FRA. Eleven villages in Gadchiroli have submitted written notices to the state level monitoring committee on the FRA and the district collector protesting the omission of the right and the illegal conditions imposed on them. “But these appeals have not even been acknowledged, leave alone replied to,” says Gurnule.

Residents say forest officials have been warning them that bamboo and tendu, the two most lucrative MFPs, are not included in their rights. Tofa offers a solution. He calls for an urgent review of all the community forest rights titles given till date and automatic granting of community forest rights to villages, at least to those in the scheduled areas covered by the Panchayat Extension to the Scheduled Areas (PESA) Act of 1996. “All rights to resources should be granted automatically without the need of filling claims, leaving the residents and forest department to sort out the boundaries with the help of land record documents,” he says.

Tofa and Hirabai Hiralal have given a written submission to this effect to the National Advisory Council on FRA. The two-decade struggle of Mendha Lekha has highlighted the need of a clearer legal framework, believes Sarachchandra Lele, senior fellow at Bengaluru-based Ashoka Trust for Research in Ecology and the Environment and member of the National Forest Rights Act Committee.

FRA recognises the community’s right to dispose of forest produce but as per the current law one needs a transit pass to take bamboo out of forests. There are other national and state level Acts which restrict a community’s access to forest resources. All this needs to be resolved by amending laws, Lele says, adding, “A simplified set of norms need to be defined for allowing the communities to enjoy the rights over forest produce.”

Soumitra Ghosh of the National Forum of Forest People and Forest Workers agrees, “Issuance of transit passes to Mendha Lekha solves the immediate problem of the village. But in the long run villages cannot use the passes issued by the forest department since much of the produce will travel through highways where gram sabhastamped passes may not be recognised.”

He warns if gram sabhas are dependent on the forest department for pass books, there will be a constant tussle between the two. “The rules of FRA will have to be amended to permit gram sabhas to issue their own passes,” Ghosh adds.

Mendha Lekha’s experience on April 27 corroborates this. “We were made to give Rs 10,000 for 100 passes,” says Hirabai Hiralal. “After the ceremony we realised we had been given the passes the forest department gives to people who take bamboo-felling contracts and pay money for them. These are different from the passes issued by the department when it transports the bamboo it fells on its own,” he says. The department has treated the gram sabha like a contractor and not the bona fide administrative unit that it is, Hirabai Hiralal adds.

Asked to comment on this, Maharashtra Principle Chief Conservator of Forests A K Joshi said the gram sabha can recover the cost of the passes from bamboo procurers.

Forest department not too happy

Liberation of bamboo has not gone down too well with the forest department. P J Dilip Kumar, director general of forests, says, “We are extremely worried by the way rights are being demanded. They have to be settled under the rule of law. The provisions of FRA should be reworked according to the existing laws.” He argued the gram sabhas are not capable of sustainable use of forest resources. “They are mere concepts than institutions.”

According to Joshi, the issuing of passes to Mendha Lekha is just a “symbolic” event. The residents do not need them to transport bamboos unless they belong to the burad (bamboo artisans) community who need the forest produce for livelihood as opposed to nistaar (forest produce meant for direct consumption) needs.

But the rights under question are not nistaar but ownership rights to forest produce. “At this moment the forest department is at its defensive best, and our every move is being watched,” says Hirabai Hiralal. “If we make one mistake, they will pounce upon us.”