The Tihar jail exemplifies how efficient waste management not only makes our surroundings clean, but also endows us with economic benefits. What is required is a little bit of conviction and hard work 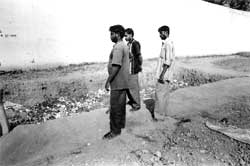 jail and inmates. These two words evoke in our mind clichd images of a 'taboo world' full of grubby and unclean people. Incongruously, it is this 'dirty section' that has turned out to be more concerned about cleanliness and environment -- the proof being a commendable waste management programme that is underway in the Central Jail, Tihar, New Delhi.

The Central Jail has six jails. But jail number three stands out from the rest. The inmates of this jail are not only earning a handsome remuneration from an in-house garbage management programme but have also constructed a factory from the rubbish. The programme is unlike any other prison reform schemes. It is entirely carried out by the inmates and its success in a short time period only radiates the high motivation level among the convicts.
The programme started in July 2001, with the superintendent of the jail O P Mishra wholeheartedly supporting the innovative plan put forth by V S Yadav, a retired colonel serving a three-month sentence. Soon, the nitty-gritty of the programme was quickly dealt with. A team of 11 under-trail inmates was formed and the area for disposing the biodegradable waste earmarked. The inmates dug five large pits within the prison complex.

Thus, started the daily early morning ritual of the inmates. They collect garbage from jail with the help of a cycle cart. After the collection, the biodegradable waste is segregated from the non-biodegradable ones. Only the organic waste is dumped in the pits. Once the pits are full, they are covered with a thin layer of soil and left for composting. Estimates show that every convict generates at least 15 kgs of waste per week. The jail has a total of 3,000 inmates, therefore, 45,000 kgs of garbage is produced in total by the jail.

Till now one pit has been completely filled and covered. "The pit was sealed on August 21, 2001. After a year, its garbage will turn into fine manure," said Vijay Paswan, an inmate, who is a member of the garbage management programme. As the five pits can be reused, the problems faced while finding new landfills have been resolved.Prior to the starting of the programme, the Municipal Corporation of Delhi (mcd) was managing the garbage in the jail. But the state of affairs was quite despicable. "Previously the garbage remained accumulated in the jail till it was collected by mcd on a biweekly basis and that too depended on the availability of transportation. Due to this, there was a plethora of garbage in the premises. Moreover, quite a lot of the waste was dropped on the way while being taken to the mcd landfills. But now, with the roaring success of the garbage management programme, such stumbling blocks have been completely eradicated. The jail is not only absolutely clean but numerous associated heath problems have been reduced considerably," said Yadav.
The programme is generating Rs 11,000 per month and that too after deducting Rs 300 per head paid to the 11 inmates as remuneration. "This amount can be attributed to the funds saved by not making payments to the mcd ," said Mishra. "The income will go up in the near future as we are thinking of marketing the compost which will be generated from the biodegradable waste," he added. Even the non-biodegradable waste like plastic, polythene, glass and metals are sold to local scrap dealers.

Another innovative idea that emerged from the programme is a factory constructed for making furniture and other home fittings. This entire factory, housed in the jail, was built using steel scrap, broken brick pieces and asbestos sheets. The expenditure of construction was a meagre Rs 25,000. Anand Sharma, a prisoner serving a seven-year term, says: "About 20 of us would work in the factory. This project has two positive points. Firstly, we will learn skills that would help us a lot while searching for employment after being released from the jail. Secondly, we can earn money."

The factory, which was inaugurated on November 15, 2001, has already started doing business. Its first client is Siva Niketan School, New Delhi. It will provide doorframes, windows, doors and wooden furniture to a new building of the school. The jail will also provide potted plants, ornamental trees, as well as paintings and murals to the school. "I am delighted to see the skills and enthusiasm among the inmates. I am very happy that our school will be constructed with the waste material from the jail," said Ranjana Kaul, chairperson of trustees of the school who is also an eminent Supreme Court lawyer.


Other jails of Tihar are now being inspired by the overwhelming accomplishment of the programme. The next in line is jail number four, where a similar programme would be started by January 2002. The programme is not only economically viable but also helpful from security point of view, as now there are very little chances of the inmates escaping from the prison using the mcd trucks. Several attempts of jailbreak have been made in the past in this manner.

Moreover, the programme is contributing constantly to the Prisoner's Welfare Fund (pwf). "The fund plays a significant role for supporting the needy family of the inmates," said Mishra. "Such incentives and the convicts' commitment are the main factors responsible for the success of the programme," he proudly states.

Certainly, the Tihar inmates are going green. The garbage management programme is not the only proof of this. According to Mishra, as Tihar has a huge area of 161 hectares, plans are afoot to start a tree plantation scheme and use the manure produced by the garbage management programme for this. Undoubtedly, such plans would make Tihar an example to be followed by many others.