Bee sure to yield fruit

It is established that bee-keeping increases fruit productivity, but can the practice become successful in urban India?

Bee sure to yield fruit 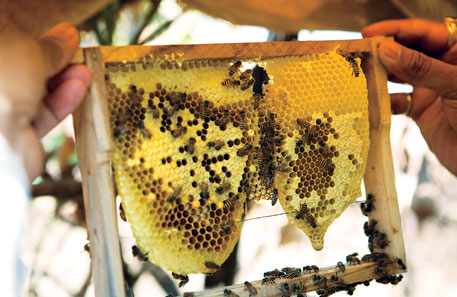 In 2013,Sangeet Kumar placed three bee boxes in the 1.6-hectare garden of INS Trata naval base at Worli, Mumbai, where he is the environment in-charge. His small act yielded fruit, literally.

“ We had lots of fruit trees in the garden, but not much fruit. But ever since we introduced the bees, the trees have begun to yield more fruit,” he says. “Just a few days ago, the branch of a water apple tree broke with the sheer weight of the fruit. We have never seen such harvest before!”

Sadly, Kumar’s is the only success story of urban bee-keeping in Mumbai—an activity that has become a hobby for citizens in cities such as London and Toronto, thanks to rising awareness about the diminutive pollinator’s crucial role in farm ecology and economy and the dangers facing it. Indian cities are yet to catch up, both in terms of available space and citizens’ attitude, to support the insect most crucial to food supply for humans.

Bee as a stinger

One of the biggest hurdles to urban bee-keeping is the popular perception of the bee as a dangerous creature. “It is seen primarily as a creature that stings,” says N V Mahadevan, a software consultant and urban bee-keeping trainer.

Mahadevan trained with Mumbai-based non-profit Under The Mango Tree (UTMT), which also trains farmers in Maharashtra, Madhya Pradesh and Gujarat in domestication and rearing of the indigeneous bee species Apiscerana. He later ran the same training programme for two years as instructor.

Mahadevan, who recently shifted to Coimbatore in Tamil Nadu, says the idea behind the programme was that people should be able to keep bee boxes on their balconies and roofs. The hands-on, year-long training course costs Rs 8,000 and is conducted every Sunday. People are taught everything from honey extraction to catching absconding bees. Citizens living in urban areas with farmhouses in the suburbs, as well as those without farms but plenty of curiosity, joined the programme. 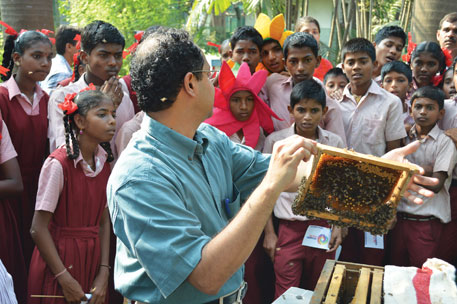 After running for three years, the course was discontinued last year because most participants said they were not able to practise it in the city. “Till date, we have trained 30-40 people in the art of bee-keeping,” he says, adding ruefully that most of them could not finally keep the bees because they could not get permission for the activity from their housing societies.

Gauri Devidayal, a restaurant owner who participated in the course, was successful in keeping two bee boxes at her farm in Alibagh on the outskirts of Mumbai, but could not keep one at her urban home. “I do not have a balcony or terrace. The only space available is the garden of my apartment building, which also doubles up as a children’s playing space, so that was out of question.”

She says her own fear of bee stings was reduced after the training, but the popular attitude remains unchanged.

Rhea Cordeiro, senior programme officer with UTMT, says bees require sensitive handling and sufficient green spaces for foraging. “Areas like Goregaon in Mumbai do have sufficient green space for bees, but keepers are required to ensure that bees have a source of pollen and nectar throughout the year. If they run short, bees can desert the hives.”

In rural areas, she explains, farmers are trained to ensure constant food supply for the insect and also to recapture swarms when they escape, but in crowded urban landscapes these operations can be close to impossible. Sangeet Kumar has faced this problem. “Despite having a 1.6-hectare garden, bees from two of three boxes have absconded,” he complains.

On the advise of UTMT staff Kumar has shifted his boxes to a more suitable location where there are flowers throughout the year. But this might not be enough because big bees also need a consolidated foraging area, which is difficult to find in urban areas.

While there has been much scientific work on bees in agricultural and forest settings, worldwide, urban bee ecology is a relatively emerging field. Very little scientific information is available on the habitat requirements of the insect in urban landscape. What is worse is that hardly any study has been done in India. A 2009 review of studies in urban bee ecology published in the journal Cities and the Environment found that most studies have been conducted in North America, Brazil and Germany, while Africa and Asia are lagging.

For instance, a 2011 Costa Rica study by Victoria Wojcik published in the Journal of Pollination Ecology, not just found a direct relationship between bee visits and abundant supply of flowers but also the density of flowers in an area. Larger bee species, it was found, favoured areas that had dense growth of flowers, which are more difficult to find in urban areas. Apiscerana, the only domesticable bee species in India, is a large species. The absence of such studies in India can be a big hurdle in conservation of bees in urban landscapes.

Training not a waste

UTMT feels that providing training in urban bee-keeping has not been a waste. “The programme has helped us reach out to urban people, especially schoolchildren, and spread awareness about the need to conserve bees,” says Cordeiro. “While bee-keeping itself has not taken off in a big way, a lot of urban people are now actively involved in our rural bee-keeping programmes as donors, trainers and campaigners,” he adds.

The organisation’s bee-boxes at Maharashtra Nature Park in Mumbai, as well as events organised around bee-keeping, like bee-walks, have proved to be a big draw, especially for children and young adults.

Mahadevan, who is now planning to start a bee-keeping training programme in Coimbatore, says that while maintaining a bee box may not be a practical idea yet, there is certainly a thirst for knowledge among the urban population.

“Our course has catered to people’s knowledge needs, and more understanding and interest in the subject will surely work towards bringing about required changes in urban spaces that could make these spaces more bee-friendly.”