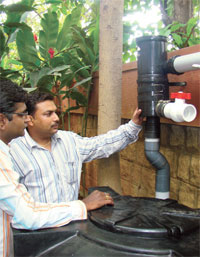 Business is brisk for John Daniel. He has sold more than 4,000 rainwater filters, mostly in Bengaluru, in the past eight months. This is a sudden climb from the 1,000-odd filters he sold in the previous five years. Sales shot up after the Karnataka government made rainwater harvesting (RWH) compulsory in Bengaluru.

The August 2009 amendment of the Bangalore Water Supply and Sewerage Act, 1964, came as a boon to Daniel, an environmental consultant in Bengaluru. The Act makes RWH mandatory in all the existing buildings with area more than 223 square metre and new buildings over 111 square metre.

But despite the nine-month deadline which ended on May 27, 2010, only 22,000 plots have installed the RWH system, officials at the Bangalore Water Supply and Sewerage Board said. More than 60,000 existing plots should have installed the system.

“The state government will extend the deadline by another six months after which water connections of all those yet to set up a system will be cancelled,” said B M Manjunath, executive engineer of the RWH cell of board. Daniel’s filter, called Raintap, was designed and developed by the Karnataka State Council for Science and Technology. It has a flush valve that removes the initial impurities. This is shut as soon as water looks clearer. A net and mesh then filter the smaller particles. 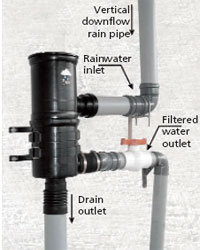 Clean water is stored in wells, sumps or it recharges borewells via groundwater. Another filter called Rainy has sold 9,000 units in the last two years, and together Raintap and Rainy have captured 92 per cent of the market share.

Rainy’s creator Michael Sadananda said inlet of the filter is designed in such a way that water flows in an angular motion at a specific velocity. This creates an intermolecular attraction or cohesive force. The force segregates leaves, debris, dirt and all other physical impurities in the run-off water from rooftops that are then flushed out through the drain outlet.

These filters are limited to dealing with rooftop area of not more than 250 square metre. Sadananda and Daniel plan to introduce larger filters capable of dealing with a rooftop area of 500 square metre by early 2011. To check the efficacy of filters in the market and to give consumers more options, the board published an advertisement in newspapers last month requesting manufacturers to submit a unit to the Bangalore University. They received response from 12 manufacturers.

A majority of them have already sent their filters to the university authorities. An OK stamp from the university will help boost sale of their filters. “BU’s study will look at filter’s capacity and its ability to reduce turbidity (cloudiness of water) at the outlet,” said Manjunath.

But such filters seem unnecessary since they only deal with physical impurities. “Why spend Rs 5,000 on such a filter when a dhoti or saree wrapped thrice can perform the same function,” said Vishwanath Srikantaih, director of Biome Environmental Solutions, a consultancy firm in Bengaluru. He created a filter called Varun in 2002.

Srikantaih, who was on the panel that developed the bylaw for the Act, said guidelines to use filters have been issued, but they are not mandatory. If the catchment is kept clean there is no need to get into the certification as it will drive up the cost.