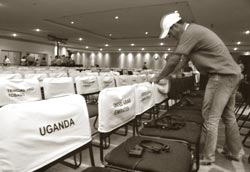 What kind of ripples were let loose by the breakdown of talks? Celso Amorim, Brazil's minister of external relations and leader of the G-22 group, felt that the lack of engagement (of developing nations) in the Singapore issues, which mirrored the lack of engagement (of the developed world) on agriculture, caused negotiations to fall apart. Robert Zoellick, however, blamed countries for treating the negotiations like a "freebie". "[Some countries thought] they could have the points they suggested, argue and not offer and give. And now they are going to face the cold reality of that strategy: go home with nothing." Lamy didn't want to play the blame game; he said. "This [the failure of Cancun] is not only a severe blow for the WTO, but also a lost opportunity. All of us, developed and developing countries, we could have all gained here and now we have all lost."

Representatives of civil society were more critical of the trade superpowers. "Rich countries overplayed their hand and misjudged the strength of feeling and unity of the developing world who want to make trade fair and have a stake in global prosperity," argued Phil Bloomer, head of advocacy, Oxfam. Agreed Barry Cotes, the director of London-based World Development Movement: "Quite simply, walking out was better than the deal on the table. The US and the EU played Russian Roulette with the WTO, and the bullet was in the chamber."


On what the future held for the Doha Round, Derbez was optimistic. "If we keep pushing, if we keep working together and if we learn the lessons from here in terms of how to go and find consensus, we will be able to advance the round again by December and set back on track what we proposed in Doha," he remarked. For Zoellick, however, the January 2005 deadline for completing the development round may be in jeopardy. "Its hard for me to believe that the position we are in now, we will be able to finish on time," he said.

The WTO itself came in for criticism. "Rules need to be introduced because the WTO is supposed to be a rules-based organisation. But, it is a power-based organisation," argued Irene Odida. Zoellick, however, was not keen on changing the rules of play. "The WTO is an organisation that works by consensus. I don't think that is going to change, and so I don't think it would be very fruitful to try to spend time trying to move to voting patterns or others," he emphasised. But strangely, EU's Lamy wanted a revamp, "The WTO remains a medieval organization," he said. "The procedures and rules of this organisation have not supported the weight of the task and there is no way to structure and steer discussions amongst 148 members in a manner conducive to consensus." His statement showed he didn't like what happened at Cancun, and that he was prepared for a more rigourous, dangerously exclusivist, WTO.

Civil society groups were optimistic that the resolve of the developing world would make the organisation better "World trade negotiations will never be the same again. On paper, this meeting has failed but the new power of developing countries backed by campaigners around the world has made Cancun a turning point," argued Bloomer. Bello, too, felt that the "bad multilateralism" the WTO represented was dead. "I think, we will now see a future of real multilateralism," he claimed. There would now be multilateral organisations, "which are not ruled through power relations, and are not anti-democratic or non-transparent."

The unilateralist route has become a real worry, given the intransigent manner in which the US likes to conduct its affairs. But as Youssef Boutros-Ghali, minister of foreign trade, Egypt, says reassuringly, "There is this tendency occasionally to go through regional and bilateral agreements but ultimately a viable trading system must be multilateral. It is in everyone's interest that a multilateral system, rule-based, organised with the jurisprudence that is acceptable to everybody, is the future of the trading system."