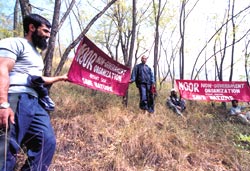 The young volunteers of Jammu and Kashmir-based Nature's Oath to Obtain Reliance (noor) are deeply engrossed in a mission that started about a year ago as part-time activism: creating awareness about activities harmful to the environment, particularly among people living in remote areas . Their concerns range from wildlife protection to solid waste management.

"I was out on a hiking expedition with friends. We saw the tremendous deforestation in what used to be dense jungles, and were horrified by the sight. This was probably what first set us working on the restoration of forests. Later, we formed noor to spread awareness on the issue," said Mir Sajad, publicity secretary of noor. Sajad and his friends set about surveying some forest areas to understand the reasons behind the plunder, and who was responsible.

They found that nomads living in jungles were wholly dependent on forests for firewood. "They were cutting small trees for firewood, and we realised that they need an alternate survival strategy. This was probably why all afforestation drives in the forests were also unsuccessful. We pooled in money, and bought and distributed kiker (acacia) seeds among them. They could sow these seeds and obtain firewood from those patches," says Mir Nasir, vice-chairperson, noor.

noor volunteers have also organised camps in forest areas to create awareness about the need to protect forests. Interestingly, these youth receive no funds from outside. They pool their 'pocket money' to sustain their drive. "Each of us contributes Rs 250 a month to the noor fund. We are a group of five to six dedicated and full-time volunteers. After seeing our work, some of our friends and relatives also contributed some amount to the fund. I remember the time when we had to organise our first camp; we had to strive hard to collect Rs 5,000. But we did not lose heart and managed somehow," says Mir Ishfaq, financial advisor, noor.

The paucity of money has been a handicap, but the noor volunteers are not disheartened. They have now started a campaign on solid waste management. "We have been working hard to put an end to the use of polythene and plastics. The government speaks of a blanket ban on polythene, but nothing really happens. We tried to prevent the use of plastics through viable alternatives, like jute and paper bags. We purchased these bags, inscribed them with information and slogans on environment protection, and distributed it among shopkeepers in the area," says Malik Mustafa, president, noor.

Shopkeepers are impressed, but plead helplessness. "We are ready to use alternatives, but those are costlier. Also, customers demand plastic bags. The government should ban plastics, and subsidise alternatives," says Mohammed Yousuf, a shopkeeper in Shalimar, Srinagar. Mohammad Ayub, a shopkeeper in Harwan, Srinagar, commends noor for their campaign, but says that the initiative to ban the use of plastics must come from the government.

noor has received a fair share of appreciation for its work. "These boys belong to well-off families. They could have moved on with their careers. But they trek through jungles, and converse with the nomads. Such is the force of their conviction that they convinced them to sow kiker seeds for firewood. They organised free medical camps as well, so they could interact with people and spread their message," says Nisar Ahmad, a junior engineer with the government irrigation department.

The local media has been appreciative of the noor volunteers. In fact, their concern for the bear deaths that rocked some parts of the Kashmir valley was received well by the vernacular press. The government is not as pleased, however. noor has been trying to register itself as a non-governmental organisation. But the process has been hanging for a long time. Every time they enquire about the status of registration, they are informed that some sort of a verification process is in progress. These young volunteers, however, are determined to carry on their work. "Although the situation in Kashmir does not permit us to remain fully engrossed in our work, we are doing all we can," says Mustafa.