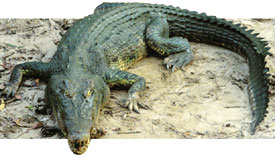 Hardly a week passes without a report on attacks on livestock and humans by crocodiles from the Bhitarakanika sanctuary in Orissa. Saltwater crocodiles in the breeding centre in Bhitarakanika often move to freshwater bodies such as the Brahmani, Kani and Kharashrota rivers -- and their tributaries -- and create much havoc. These maligned reptiles, however, got some good press recently, when it was reported on the Internet that a seven-metre long croc -- the largest living crocodile in the world -- is in Bhitarakanika.

The reports turned the tables there were editorials in local newspapers commending efforts of the Orissa government's wildlife wing. The state's media gloated over the largest living crocodile. The Samaj, for example, noted in its editorial of June 14, 2006, "the crocodiles of Bhitarakanika have made us proud". But then came the damper the conservator of Bhitarakanika sanctuary A K Jena disclaimed the record.He, in fact, challenged the person who sat on the crocodile to measure it in public -- apparently, it is not possible to measure this nasty creature directly. One can only extrapolate the creature's length, indirectly and this is the standard practice in Bhitarakanika and elsewhere.

Jena, however, did point out that there are three or four crocodiles in Bhitarakanika which are more than six metres long. As far as I know, no one has come forward to answer the conservator's challenge and provide proof for the now elusive seven metres record holder. This controversy over crocodile size, however, gives an opportunity to talk of interesting facts about large crocodile specimens of Bhitarakanika.
From personal experience, I know that human beings are not afraid of crocodiles. In the early 1940s, we were sent off to our village, Apsarpur (also called Gopalpur), every summer. Reaching the village on the banks of Kharashrota river (which opens into the sea in Bhitarakanika) in Cuttack (now Jajpur) meant a few hours of journey by train, followed by a boat ride. Muggers (Crocodylus palustris) and gharials (Gharialis gangeticus) were star attractions. The river had plenty of them.

The common belief in the village was that the crocodiles, specially the gharials, belonged to the village deity, goddess Berudei and therefore, wouldn't harm us. Thinking back, I feel that this was really an excellent strategy for preserving the reptiles no villager would ever harm an animal associated with the deity, no matter how nasty. Today the Berudei temple and the crocodiles are gone the temple has been washed away and the reptile has fallen to hunting.

I vividly remember a mugger deciding to surface about a few feet from me while I was bathing in the river. Its impish smile is still fresh in memory. Needless to say, I preferred to bathe in very shallow water, not popular with crocodiles, during the rest of my stay.

During another visit to the village, there was commotion that a sahib and a sahibani had come for crocodile hunting. It was height of summer, so most crocodiles had retreated to the river gorge, ganda. Armed with their guns, the sahib and sahibani took a boat, headed for the ganda, and vanished from the scene for a while. The boat reappeared on the scene in a while, and as it approached the bank, the sahib and the sahibani disembarked with victorious smiles. They also had two trophies a mugger and a gharial.

The crowd swelled as the s ahib and s ahibani posed with their trophies for a photo session. In retrospect, a few things about the episode seem of interest.One is the pleasure the sahibs and sahibini must have had in shooting crocodiles, when the creatures were at their most vulnerable. It was pre-monsoon and the reptiles must have been getting ready for breeding and the whole lot had assembled in the ganda since the river was drying.

Of course, they were by no means endangered. But even more interesting was the local people's reaction to the presence of the sahib and sahibani. Their presence was a memorable event and that of the crocodiles was a non-event.

After all these years, witnessing a crocodile in a river is very much an event. We all know that crocodiles in India came close to extinction by the early 1970s, leading to the un Food and Agriculture Organization's crocodile revival project. A survey had then revealed that all three species of crocodiles endemic to India, the mugger (thantia in Oriya), the gharial and the estuarine crocodile (baula in Oriya), were still found in Orissa, though in small numbers.


According to the Orissa government, the saltwater crocodile can now be considered at a recovery stage. More than 1,400 have been sighted according to the latest census. In contrast, the status of the mugger released in Simlipal and at Satkosia gorge, remains unclear whereas the status of gharial is definitely not satisfactory only a a few of the creatures are alive in the wild.

This author contributed indirectly to the crocodile programme in Bhitarakanika. By applying tsd (Temperature Dependent Sex Differentiation) technique, I produced males (Current Science 76(5), 695-96) -- the ones hatching naturally were predominantly females and any recovery programme has, obviously to pay attention to the sex ratio of the juveniles released.


The satisfactory recovery has a dark side the reptiles which were tolerated inspite of occasional encounters in the past are considered a menace today.

It's a difficult problem, but not an insurmountable one. Many countries have not only protected their crocodiles, but have set up sustainable enterprises where they utilise the crocodiles for other purposes. Thailand, for example, has introduced a "crocodile hatching participatory scheme" in which, from January to March, the crocodile hatching period, tourists are allowed to hatch crocodiles. Closer home at the Mango Pir shrine in Karachi, followers of the saint feed resident crocodiles as it is believed to be auspicious. But we in India suffer from a typical syndrome of not looking beyond absolute protection. This has led to the interesting news that Romulus Whitaker, the legendary snake man of India, now has crocodile eggs for breakfast as he is not allowed to export the large number of eggs that are produced in his farm.


But why seek examples from other countries. The Panchatantras and other fables in the country abound with stories about crocodiles. The reptile has also captured the imagination of many poets in ancient times the beauty of Makarakundala adorning the ears of gods is a common poetic trope.

With the strong cultural association they invoke, crocodile parks can be a good tourist attraction. It is about time that we seriously think about crocodile management and, for that matter, management of other species whose numbers are growing beyond sustainable level. How long can we go on with the "all or none principle of conservation", even for the species which have recovered within a saturated habitat which cannot support large populations any more?