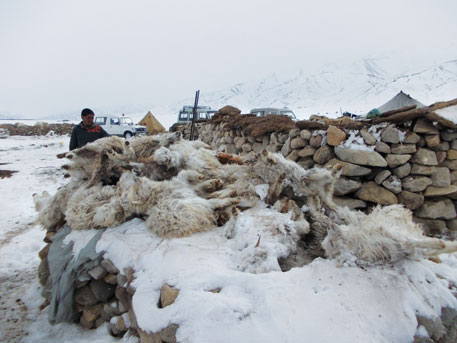 The pristine beauty of the Changthang region in Ladakh is marred by the stench of death that hangs over it. In the past three months, thousands of changra goats, whose cold-shielding wool—six times finer than human hair—is used to weave the famed pashmina shawls, have died because of heavy snowfall.

News of sporadic deaths came in the first week of February from the inaccessible transit settlements of the nomadic Changpas who rear changra goats. Before the information could reach the state headquarters in Srinagar, there were more deaths. As per the Ladakh Autonomous Hill Development Council (LAHDC), 25,000 changra goats died in February and March, putting livelihoods of the Changpas at risk.

Ladakh produces 80 per cent of the country’s pashmina fibre. It fetches Rs 3,000 per kilogramme.

Low on food, high on money 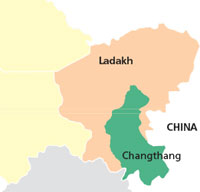 Changthang is a remote plateau in south-eastern Ladakh, bordering China (see map). At an altitude ranging from 4,200 metres to 5,700, the region is a cold desert that receives little rain. The summer rain of four to five days supports small patches of pastures, dictating the delicate ecology-economy equation of the Changpas. The pastoralist community largely depends on livestock products for survival. Dairy products are converted into less perishable forms like butter and cheese, which are used during winters. The produce is also used as currency in the barter system practised in the region.

Changthang usually experiences five centimetres of snow during winters when temperature dips to -30°C. But this year it received 121 cm of snowfall, which many claim is the worst in the past half a century. “This is unusual and has triggered the crisis,” says Monisha Ahmed, an anthropologist working in the region. According to residents and government officials in Leh, most of the goats have died due to starvation. There was very little rain last summer due to which there weren’t enough pastures. Adding to the woes, heavy snowfall cut off the region from the outside, causing delay in fodder supply from the government. Whatever pastures that sprouted were buried under snow, making grazing impossible. Mostly young and the old goats have died. It is not the cold but the thick snow cover over pastures that killed them, says Nawang Tharchen, a resident of Rupshu valley and a Changpa. 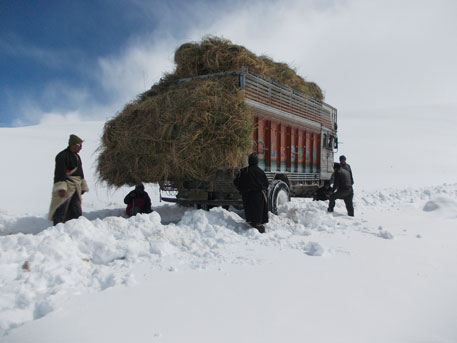 The casualty could have been higher had the local district council not mounted an effective fodder supply programme in February and March. Though the government sent 1,300 tonnes of fodder in November last year, there was still a huge shortfall.

The snow cover is expected to melt by the first week of May, making some pastures available for grazing. Till then, the future of the remaining 175,000 changra goats hangs by a thread. 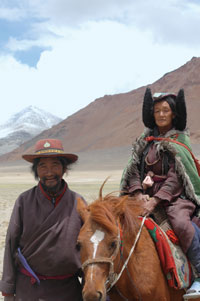 While government officials make emergency efforts, the local pashmina traders are pondering over the impact of goats’ deaths on the economy. The region produces close to 50 tonnes of raw pashmina wool every year. One kilogramme of pashmina wool can make two shawls, each fetching Rs 5,000. Traders say production could be 25 per cent less. “Prices will rise up to Rs 4,000 a kilogramme,” says Ahmed.

Besides the price rise, there will be a drastic fall in the availability of dairy products consumed by the Changpas. The immediate threat is to local food security, says Ahmed. The big herders with 200-300 pashmina goats will be able to survive the current crisis, but the small herders have a tough time ahead of them. “They will be doubly impacted: loss in cash income and dairy food items,” says Ahmed.

From sheep to goat

The current crisis exposes the socio-economic changes the Changpas have seen in the past decades. At the centre of these changes is the rise of pashmina wool as a high cash commodity. In early 1960s when demand was low, a kilogramme of pashmina fetched Rs 700. “Since then, there has been a two-fold increase in the population of changra goats,” says wildlife biologist Tsewang Namgail who has been researching on the Changthang region. Before the record snowfall, 200,000 changra goats were owned by 800 families.

Till 1950s, the Changpas used to move to Tibet for salt and other essential products. This left the pastures on the Indian side less utilised. But after the 1962 war with China, the practice of migration stopped and the nomads lost access to the region’s pastures. During this time there was an influx of refugees from Tibet who ultimately picked up livestock rearing in Changthang. Traders in Kashmir who used to get pashmina wool from Tibet started procuring the fibre from Ladakh. Restriction on trade of shawls made of shahtoosh, known as the king of wools procured from the endangered Tibetan antelope, also contributed to the increase in demand for pashmina shawls. 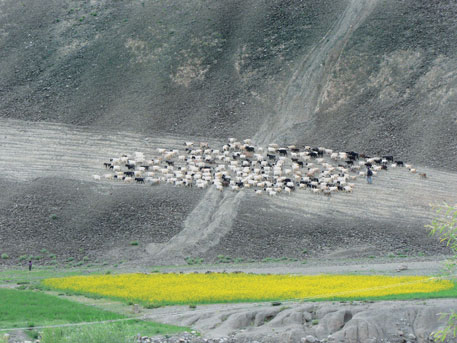 Despite an increase in production, traders have to import raw pashmina wool from China and Mongolia. Referring to the rise in production of pashmina, Ahmed says, “Earlier, the Changpas used to earn more from sheep wool than pashmina. Now they only target pashmina wool.”

Agrees Tharchen: “Earlier, people used to keep the sheep around the goats to protect them from cold. This time, there were no sheep. As a result goats crowded over each other to keep themselves warm and died in the process.”

Ahmed and Namgail believe the surge in the population of the chingra goats without care for fodder availability has been responsible for the mass deaths. There is no assessment of the availability of pastures for this kind of increase in goat population, says Namgail. The Central government, which has been encouraging pashmina production by providing incentives to the Changpas for several decades, is also worried about the region’s biological limitation in terms of pastures.

To begin with, says Namgail, a study needs to be done to assess the region’s carrying capacity to sustain the surge in the number of changra goats. In the absence of any comprehensive assessment of the fragile ecology, the only effort government may take is the supply of fodder. “But that will not solve the problem in the long run,” says an LAHDC official. The Central government has proposed to create well guarded enclosures of pastures along the migration routes of the goats. “Without understanding the local communities and their needs, such steps will end up causing more harm than good,” argues the LAHDC official.