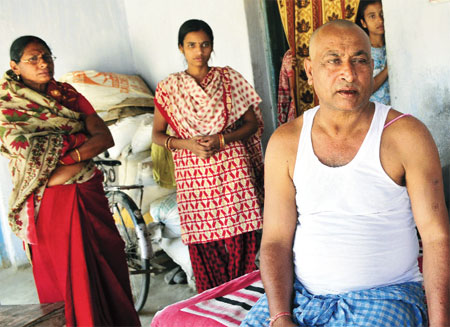 Twenty-year-old Rahul Kumar, a right to information (RTI) activist, knew the land mafia was behind his parents’ murder. His mother and father were involved in a land dispute in Muzaffarpur’s Sirisia Jagdish village. Barely a week after filing an RTI application to seek information about the murderers, Kumar was kidnapped. A day later, on March 10, 2012, his throat was slit and body was set on fire.

Kumar’s murder is not the only case of gruesome crime in Bihar. Since 2010, six RTI activists have been killed for exposing major scams in various state departments. Ram Kumar Thakur of Ratnauli village in Muzaffarpur was shot twice in the belly for exposing crime in his village panchayat. The police arrived at the scene and took Thakur, who was bleeding profusely, to a distant hospital in a private vehicle. “He would have survived had the police taken him to a nearby nursing home. They wanted to kill him,” alleges the deceased’s elder brother. Two days after Ram’s murder, a woman activist in Mandai Khurd village was gangraped and then killed. Her sister-in-law is inconsolable. “Her body had deep teeth marks as if wolves had torn her apart,” says the relative who found bamboo sticks and pebbles in the activist’s private parts.

The six murders were carried out in the most brutal fashion to warn activists of dire consequences, claims Shiv Prakash, a prominent RTI activist. Rahul’s RTI brought to the fore land mafia; Ram exposed a series of scam in rural job guarantee scheme and installation of solar lights in his panchayat; and the female activist had protested irregularities in wage payment under the Mahatma Gandhi National Rural Employment Guarantee Act (MGNREGA). The other three murdered RTI activists were Ram Vilas Singh, Murlidhar Prasad and Shashidhar Mishra. Ram Vilas sought call records of a senior police officer to expose fertiliser scam, Murlidhar of Munger exposed corruption in his village panchayat and Shashidhar Mishra took on railway scrap mafia. The six activists had exposed scam worth an estimated Rs 250 crore. Most of the scams are related to development projects.

Besides gory murders, corrupt officials use another tactic to scare away RTI activists. They implicate them in false criminal cases. In majority of the cases charges of rape and snatching under the Scheduled Castes and Scheduled Tribes (Prevention of Atrocities) Act are levelled against activists to ensure immediate arrest. The Act allows the police to procure arrest warrant immediately from magistrates.

Since 2005, some 315 activists have been implicated in false cases. Around 80 of them are absconding; properties of 30 of them have been confiscated for evading arrest warrant, according to an RTI reply received by Shiv. Farzand Ahmed, state information commissioner, accepts that RTI activists are tortured under fake criminal cases. “There is a nexus between the police and corrupt officials and criminals.” 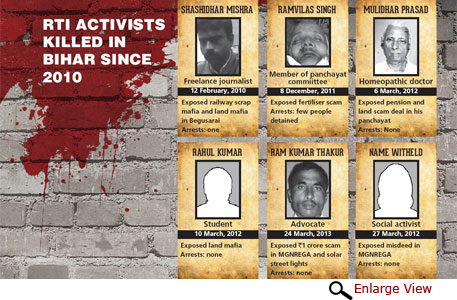 Early in April this year, five RTI activists from Bhojpur district sent a petition to the state chief information commissioner (SCIC) explaining how they have been implicated in false criminal cases. Ahmed was shocked when a senior police officer informed SCIC that the cases levelled were actually false. “My office is deluged with such complaints,” says Ahmed, adding, “In the majority of the cases victims sought police security but were denied.”

Elder brother of Ram Kumar Thakur, Janardan, says his brother sent seven applications to the police and met the chief minster, pleading for protection. In each application Ram had cited that village head Raj Kumar Sahini and his henchmen had made several attempts to kill him. Similar was the case of Ram Vilas Singh who had approached the prime minister and the president seeking security. Today, his suspected murderer Bum Bum Singh roams free. “We are surprised at how the police takes swift action in arresting activists but remains lax in other cases,” says Ahmed.

Despite protests by residents and activists, the police is yet to take action in the six murder cases. Till date, only one suspect has been arrested: in February 2012, one of the accused in Shashidhar’s case was arrested. In the woman activist’s case, the police is yet to confirm rape. In the case of Ram Kumar Thakur, the police has refused to arrest accomplices who are seen roaming free. “Police inaction speaks volumes. The village head had given a big commission to the police,” alleges RTI activist Sanjay Sahini in Muzaffarpur. Recently, the SHO of Ratnauli was transferred to ensure fair probe.

Four years ago, the Bihar government launched a helpline service that allows people to file complaints in case they do not receive desired information through RTI. After receiving a complaint, the state information commission (SIC), responsible for keeping a tab on the functioning of the helpline, writes to the respective district magistrate to penalise the guilty public information officer (PIO) and fines him or her.

It is the onus of the magistrate to deposit the fine in the state treasury.

In 2011, SIC imposed a fine of Rs 8,32,000. Of this, it has received only Rs 31,000. “We have limited power, and state machinery functions in tandem. It is not possible for the commission to do the duty of a police. We have been failed by the police and district administration,” says Ahmed.

Shiv had filed an RTI application seeking information about the number of public PIOs that have been actually punished and the money realised in cases of withholding or delaying information. The information commissioner wrote to district magistrates to seek the information. “We are yet to receive any reply,” says Shiv who questions the appointment of sCIC R J M Pillai. “He was an accused in protecting people arrested on the charge of stealing electricity,” alleges Shiv. Prior to his appointment, A K Choudhary was SCIC. He was accused of being part of a medical scam during his tenure as a health secretary, says Shiv. Activists claim the post of CIC is given to one of the most favourite bureaucrats of the ruling government. “These appointments along with gory violence have broken the morale of RTI activists in the state,” says Shiv.

Perturbed, Ahmed has written to the state principal secretary, expressing concern over the killing of activists. He has suggested that all cases, including killing and harassment of activists, in Bihar should be clubbed together and an inquiry be done under the district magistrate to ensure justice.