Waste generation is not rare in urban areas, nor any other part of the world. The only difference is in the management of wastes. An effective, efficient and sustainable waste management system is still rare in India. "The scenario is bad in India and nothing can be done unless the municipalities themselves wake up to it," says B B Uppal, deputy advisor, ministry of urban affairs and employment, New Delhi. There are 73 municipal corporations and about 1,770 municipalities in the country. In smaller urban areas, Notified Area Committees/Authorities are responsible for management of waste. But, even within a municipality, various aspects of waste management are handled by different sections. For instance, in small towns, while the health officer of the municipal/local body is responsible for the waste management, vehicles and staff are the responsibility of the city engineer. Poor services are often a result of lack of inter-sectoral coordination coupled with employees who have a very low output. This is just one of the problems the municipalities face. 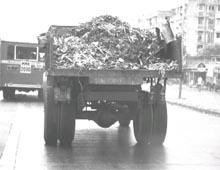 Why have municipalities failed?
There is no dearth of ways and means to dispose of waste, yet many people in India live in and around pig stys. From time to time, studies have been carried out, and recommendations have been made to solve the problem of swm. Some of the shortcomings of the swm system in the country are:

- INSTITUTIONAL DEFICIENCIES: Though urban local bodies are responsible for SWM, there is no system of accountability. "In the Municipal Corporation of Delhi, there are about 46,000 swm workers. Only 33,000 are available in the field. The rest serve as domestic servants at the residences of politicians. The absentee rate is 25 per cent. They also do private work, like collection of kuda (garbage). The sanitary inspector, who supervises them, knows about it but he takes money from the worker and marks him present," says Uppal.

The division of responsibility among the various sections in the SWM department is also not well defined. For instance, in most cities, the road section of the engineering department removes construction waste/debris and the drainage section looks after silt removal. Coordination between the two units is often seen lacking. As a result the city generally looks dirty.

- PRODUCTIVITY OF SWM STAFF: In the absence of work norms and effective monitoring systems, the productivity of labour and equipment is very low. The Interim Report cites work-distribution and lack of supervision as the main reasons. However, says Uppal, "The mismanagement is also due to lack of expertise. Municipal health officers do not have any expertise in the science of swm. They then pass on the work to sanitation officers, who are even worse."

- FINANCIAL ASPECTS: swm service has never caught the attention of decision-makers. It is no surprise, therefore, that it suffers from an acute lack of funds. Says Uppal, "We suffer because of lack of funds." But whatever it gets is also not utilised optimally. Rampant corruption is eating into the swm system. For instance, estimates place the cost of garbage collection by the mcd at Rs 620 per tonne, but the real costs have been acknowledged to be only between Rs 340-400 per tonne, a reduction of approximately 35-40 per cent.


There is no single factor responsible for waste mismanagement. While the pathetic effort by municipalities is a major reason, public apathy towards the management of wastes is another. Says Lata Shikhande of Pune, whose name is synonymous with roof-top gardening: "We sever all ties with waste once it becomes useless. Garbage strewn all over residential and market areas shows the attitude of the people towards waste."

There are other examples to highlight the nuisance the public creates, says Sultan A Ismail, a well-known vermiculture (use of earthworms to convert organic waste to compost) expert in Chennai. "There are collection points from where the municipalities pick up garbage at a specific time, for instance, 7 am. However, an hour later, heaps of garbage are visible again. People throw it at their own convenience," he says.

This calls for raising awareness among the people about the ill-effects of improper swm practices. Says A K Saxena of npc, "There has to be a major education drive on the lines of an election campaign. ngos should also be involved." Adds Uppal, "Most of the garbage generated in India is kitchen waste. So a very important thing is to involve people, teach them segregation at source and also minimisation of waste. Without their involvement, you can't do miracles." However, he adds, "People are ready to cooperate. It is the municipality that does not facilitate participation of the people."

"The problem," says Ismail, "is that the approach of the municipalities has always been top-down. They have never looked at the problem from a grassroots level." Malik also finds a serious problem with the functioning of civic bodies.

"The government system is highly centralised and that is the crux of the whole problem. They never try to involve the communities," she says, adding, "They look at garbage management as their domain and are not keen to let others near it. Moreover, the present management system is haphazard, non-scientific and not ecofriendly."

Just as communities are excluded in swm, the ragpickers, another very important link in the chain, are a neglected lot (see box: Left picking wastes).