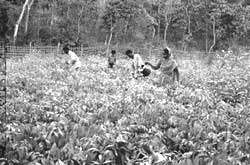 It is an oft-repeated story of dense forests being reduced to shrubs and coppice. In the case of Melaghar village in Sonmara subdivision, the 1971 Bangladesh war responsible for the wanton felling of the then abundant sal, teak and bamboo forests.

A large number of refugees from across the border took shelter in the forests. Population pressure on land increased. There were more agricultural labourers than needed. And within a decade there was not a tree in sight. "The forest guards tried to chase us, but we didn't care even if they had guns. Timber was sold to the contractors, livestock was taken to the forest for grazing and everything, including birds and fowls, were killed for food," recalls Malati Bala, a refugee who fled Bangladesh after her husband was killed in the war. After years of poverty and despair, Subodh Sur, then a young graduate, formed a group of 15 youths in his home village Rudijala in Melaghar block and started spreading environmental awareness among the people. Informal meetings and discussions were held from 1984 onwards. Finally, in 1987, the Acharya Jagdish Chandra Bose Briksha Mitra Sangha (BBMS) was formed and a formal inauguration was held on the Acharya's birth anniversary on November 30.

Prior to the formal establishment, BBMS had already started plantation activities. Plantation of trees in private lands was encouraged, while BBMS on its part planted bamboo saplings in a makeshift nursery. "After some years, the results started showing. Residents who were earlier hesitant also started growing bamboo trees," says Sur.

The people, under BBMS' guidance, continued the work till the early 1990s, by which time the Tripura government decided to adopt joint forest management (JFM) programme in the state. In association with BBMS, the forest department launched the pilot JFM project in 1991-92. "We had a particularly enthusiastic and young team of forest officers," says Dipak Datta, chief conservator of forests. BBMS volunteers also comprised of a group of bright and energetic youths. "They were residents of local villages and had the dedication to carry forward the project in the future," says Rameshwar Das, divisional forest officer.

The project in "Jeevan Deep", as the Melaghar JFM area is known as, started with 135 families. "Today, we have some 340 families involved in the project," says Sur. He was helped in his endeavour by Achunta Sinha, an Indian Forest Service officer, who was the Melaghar range officer at that time. He was also assisted by Nehru Yuva Kendra, an autonomous organisation of the government of India. In fact, says Das, "The success of the project goes to Sur and Sinha."

A total of 13,000 ha of land has been afforested so far. The groundwater level has also risen. BBMS has also established a school in Melaghar, where youths from all over Tripura are taught the basics of JFM and how it can be replicated elsewhere. "We have a network of friendly organisations and people all over the state interested in JFM after Melaghar's success," says Rekha Mukherjee of BBMS.

Besides, BBMS has also helped women start a small-scale industry. Lakshmi, a housewife, for instance, makes at least Rs 500-700 per month from selling sticks for incense and ice-cream from bamboo strips.

BBMS has been successful in not only weaning away youths from illegal felling but, most importantly, they have now made the people self-sufficient in their needs.