Ram Singh’s neighbours tease him by calling him Crorepati Singh. The 40-year-old Gond tribal from Parsada village in Raipur district of Chhattisgarh has hardly any landholding and depends on the government’s employment guarantee schemes to feed his family. But according to official documents, Singh has recently purchased land worth Rs 1.5 crore from a dozen of tribals in Pusaur tehsil of Raigarh district, 250 km away.

Singh is not the only one who is living this paradoxical life. Government records show seven other people from his village, all living below the poverty line, have also purchased land worth crores of rupees in Pusaur (see ‘Hassle-free acquisition’). 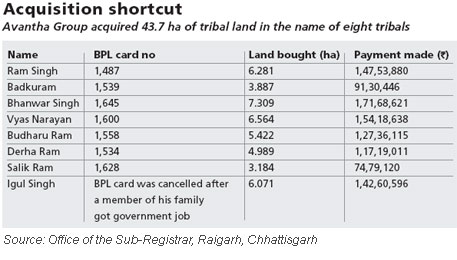 Ask them how they managed to buy the land, and they look bewildered. None of them have the slightest idea who they bought the land from, how much it cost, or who paid the money. All they know is that in June 2010, when dauji, the village landlord, took them to Pusaur and asked them to put their thumb impressions on blank documents and plain papers, they could not refuse.

“Dauji promised me two days of wages, and I agreed,” says Salik Ram, another Gond tribal. Land registry documents show he now owns land worth Rs 74 lakh. His neighbour Vyas Narayan does not even remember the name of the village he went to. He is content with the fact that he could earn some money (which he was reluctant to divulge) and gained the goodwill of dauji.

Quite obviously, none of them are aware that Avantha Group, one of the country’s large business conglomerates, is setting up Korba West Power Co Ltd, with two 600 MW coal-fired thermal power plant units, on the 43.7 hectares (ha) purchased in the names of the eight Gond tribals. The land was bought from hundreds of tribal people of Sarwani, Amlibhouna, Bade Bhandar and Chhote Bhandar villages in Pusaur. The cluster of villages are strategically important, as they are close to the industrial town of Raigarh, and not far from Korba district from where the company would procure coal for its power plant.

Sources reveal that Avantha Group made the payment for the land. The Gond tribals’ thumb impressions on plain papers give the company the power of attorney to carry out construction work on the land.

If Avantha made the payment, why did it not buy the land in its name?

The land parcels that Avantha Group acquired are owned by tribal people. As per the Chhattisgarh Land Revenue Code, tribal land in the state can neither be sold nor leased out to a non-tribal person without the permission of the district collector. The collector has to give his reasons for granting the permission and must ensure that the displaced people get alternative land or jobs, besides suitable compensation.

To circumvent these safeguards, in what appears to be widespread practice, power companies in this mineral-rich nascent state are enlisting tribal people to act as a front to first buy land from multiple tribal farmers, and then transfer it as one bloc for their projects. This reduces the liability of the company and hastens project implementation. It’s a win-win situation for industries.

For instance, Avantha Group had started constructing its power plant on the tribal land of Pusaur even before it approached the government to acquire 358 ha, including the 43.7 ha tribal land, for its project. Since land acquisition process is time-consuming, this enables Avantha Group to build the plant while the government acquires land, both physically and on paper. This saves time. 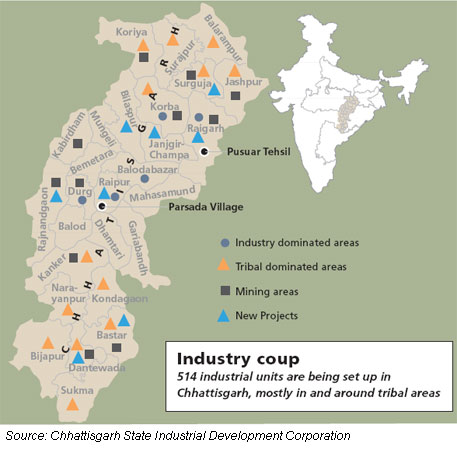 “Construction on a project cannot begin before the government acquires land and transfers it to the company. But such shortcuts are now in practice in Chhattisgarh due to unholy nexus between industries, land registration officials and ministers,” says Pravin Patel, director of Tribal Welfare Society, a non-profit in Chhattisgarh.

After the formal land acquisition, Avantha Group will have to compensate only eight Gond tribals. Had the government acquired land from the hundreds of tribals from four villages, the company would have to pay compensation to all, besides providing other facilities under the corporate social responsibility. Although the tribals from Pusaur claim they have sold land to Avantha, they do not have documents to prove it or claim any compensation in future.

Ghasia Ram Sidar, a tribal of village Sarwani, says he sold his land under pressure from officers and agents of Korba West Power. Others agreed to sell their land after company officers assured employment in the plant. The tribals of the region hope the company would fulfil their promise, but the company is not obliged to do so. Down To Earth made several attempts to get in touch with Korba West Power Company Limited, but received no response.

When apprised about the fraudulent act of Avantha Group, Tribal Welfare Minister Kedar Kashyap said, “We have directed our officers that this type of corruption will not be tolerated. We investigate such cases as they come to our knowledge.” Revenue Minister Dayal Das Baghel said, “It is a lie that corporate houses are capturing tribal land. Since 2008, we have allowed only two tribals in Raigarh to sell their four hectares of agricultural land to non-tribals. The permission was given under the Chhattisgarh Land Revenue Code. We are serious about the issue.”

If the ministers’ claims are true, how does one explain government land records that show at least 1,981 cases of transfer of tribal land to non-tribals in the past three years across the state.

Land scam in the making

As many as 514 new industrial units are coming up in the state, mostly in and around the mineral-rich and tribal-dominated areas, requiring hundreds of thousands of hectares (see map). Seventy of these industrial units are coal-fuelled thermal power plants. They have already signed MoUs with the Chhattisgarh government to produce 60,000 MW of electricity, around one-third of the country’s installed capacity. At least 34 power plants are in the pipeline in Janjgir Champa alone, where 12 per cent of the population are scheduled tribes. Farmers in this well-irrigated, fertile district grow two crops a year. 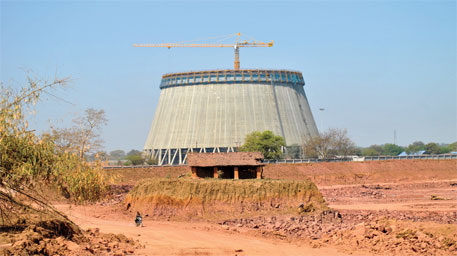 Anand Mishra, a farmer leader from Bilaspur, says if all the incidents of tribal land transfers in the name of non-tribals in Chhattisgarh are investigated, the country’s biggest land scam could be unearthed. Most of the industrialists have purchased land worth crores of rupees in the name of their servants, guards and even unknown tribals and are setting up industries, he alleges.

Take the example of Kerakachar village in Baloda block in Janjgir Champa. Sarda Energy and Minerals Limited has purchased the entire tribal land in the village in the name of only three tribals to build a power plant. One Jaykumar Paraste is the major purchaser. He has bought 24 ha, worth Rs 2.84 crore from 35 tribals. But no one knows the whereabouts of Paraste. Land registry documents show different addresses listed against his name.

Last year, Videocon purchased 28 ha of agricultural land worth Rs 3.36 crore in the tribal villages of Gond and Gadpali in Janjgir Champa district for setting up its 1,200 MW power plant. It bought the land in the name of a youth Bilam Singh Gaur of Kabirdham, Chief Minister Raman Singh’s home district. The MLA from the region belonging to the opposition Congress Party unearthed the land documents, which showed Videocon had also hired Sandeep Kanwar, son of home minister Nanki Ram Kanwar, who is a tribal, as its public relations officer for acquiring tribal land. Sandeep Kanwar bought tribal land in his name, while Videocon made the payment.

The government cancelled the registration of the land bought by Kanwar only after the opposition made a great commotion in the Legislative Assembly. But no criminal action was taken against those involved, nor were other land deals investigated.

Around the same time, at a public hearing for Top Worth Energy Limited in Balbhadrapur village of Raigarh, residents of the village made a disclosure that some agents purchased tribal land in the name of yoga guru Baba Ramdev’s ashram at a minimal rate and transferred it to the said company.

In March this year, 63 similar cases came to light in Bastar, a scheduled area under the Fifth Schedule of the Constitution. Following this the divisional commissioner of Bastar cancelled the permission of sale of a few land parcels of tribals. Several other cases are under investigation.

But no one is sure how genuine these investigations are. In Mahasamund district, for instance, the commissioner of the Raipur division in February 2011 ordered an investigation into the sale of 150 tribal land parcels to non-tribals. But no action has been taken in this regard so far.

In February this year, Vinod Vyas, state coordinator for non-profit Social And Judicial Action Group, along with some political organisations, appealed to the divisional commissioner of Bilaspur, R P Jain, to look into the fraudulent transfer of tribal land to non-tribals taking place in Bilaspur. Jain immediately wrote a letter to the district collector who was asked to submit investigation report within 15 days. The collector did not initiate any investigation. Vyas and the other complainants approached the commissioner twice in April. Both the times, Jain wrote to the collector and sought an investigation report within 15 days, but the matter did not progress beyond this.

“The order to investigate and submit a report in 15 days is stuck even after 100 days. Officers just keep writing letters. The government neither wants to investigate nor take action. Its agenda is to discourage the complainants so that business houses can prosper,” Vyas alleges.

Former chief minister of Chhattisgarh, Ajit Jogi, says, “In Raigarh alone land mafia have purchased hundreds of hectares of tribal land in the name of other tribals in the past seven years.

Now industries are functioning there.” He says the owner of the company should be arrested in such fraud cases and government officials involved suspended.

This, however, seems to be a remote possibility in Chhattisgarh, which is experiencing an industrial boom due to its abundant minerals and cheaply available tribal land. The deals remain hassle-free as both the government and industries seem to be hand in glove.