A hundred medicines, a dozen therapies but no cure, that is the story of asthma treatment world wide. Complementary medicine fill the vacuum 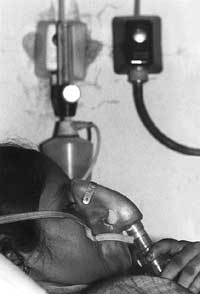 WITH increasing patients and many of them in industrialised nations the market for asthma drugs is growing rapidly. It is the eighth largest selling drug market and possibly the most profitable venture for pharmaceutical companies, at par with profits made from cancer and heart diseases related drugs.

In the absence of evidence of the global growth of asthma, sales of drug and medicines to treat asthma are a good indicator of how fast the disease is actually growing. According to the US-based Asthma and Allergy Foundation, USA, spends US $2 billion annually seeking asthma and allergy relief and globally the market is estimated to be at US $4.8 billion. Singulair, Merck's once-a-day leukotriene-antagonist medicine, alone grosses worldwide sales worth US $860 million.

But compare this to the budget spent on research and development of drugs for asthma and one comes to know why the disease is not finding any adequate response in the thousands of prescriptions being handed out daily. The Pharmaceutical Research and Manufacturers of America (PhRMA) estimates the total budget of asthma research is only US $1 billion of the total US $80 billion industry. The revenues from asthma drugs comprise about a healthy nine per cent of the total sales in western markets according the World Pharmaceutical Outlook 2000. Just 15 years ago, in 1985, asthma drugs commanded only 1.5 per cent of the total global revenue. Against this backdrop, one can evaluate the drugs, therapies and treatments present today in the market for asthmatics.


Asthma is not yet curable and neither does any convincing evidence exist yet to prove that it could be prevented. It can, however, be treated and controlled. Good care and a regimen of some expensive drugs can convert asthma from a major handicap to a minor nuisance.

Treatment for asthma is based on the severity of the problem faced by the particular patient. Three main types of treatments are usually recommended. The first set of medicinal treatments is called bronchodilators. These make the muscles around the airways relax. As this happens, air tubes open up, making it easier for the patient to breathe. The other group of medicines reduce swelling and irritation in the airways and are collectively called anti-inflammatory drugs. Corticosteroids are an example of such anti-inflammatory steroids and are used very frequently. Anti-inflammatory medicines help to control the inflammation of airways and prevent the onset of asthma attacks. They work to reduce the swelling in air tubes and keep them open for passage of air. Consequently they also decrease the mucus.

Inhaled corticosteroids, which help relax the muscles around the airways, are the most favoured these days. They dominate the asthma market, accounting for one-third of major-market sales of asthma medication. They are the most effective long-term preventive medications since a greater percentage of the dose is able to target the inflamed lungs. Doctors also commonly prescribe other anti-inflammatory medicines like cromolyn sodium and nedocromil.

Interestingly, sensitising to low doses of trigger antigens can also be helpful in preventing asthma attacks. But this treatment is rarely done in India as it is too expensive and requires a long treatment time with no assured relief. The risk also exists of the patient suffering adverse reactions to the allergen.


Based upon a set of symptoms, a stepwise approach is advised for deciding the medication regime. A predetermined set of symptoms is used to grade the severity of asthma attack. The number of drugs used, type of drugs, dosage levels and the frequency of medication, all depend upon where the patient stands on these four 'steps' (see box: Asthma control regime).

As in other medicines, the drugs are sold under brand names and not generic names. They come in different forms, including sprays, pills, powders, liquids and shots. When corticosteroids are inhaled as in a spray, the risk of serious side effects is minimised if not done away with completely. The chance of suffering side effects increases when these medicines are taken in the form of pills or as a liquid and that too over a long period. In case of pills or liquids the patient needs to go for regular check-ups by a doctor to make sure that the medicine works the best way. The medicines ease the asthmatic condition but demand that a lot of attention be paid to the usage and after care.

Although most medications aim to improve the lung function when administered regularly, they differ in their mechanisms of action, in their offset of effect and how they actually resolve inflammation. On breaking the performance of medications into subcategories of response, differences can be observed.

There does exist another kind of treatment that may be helpful if asthma attacks are triggered by allergies. This treatment is called hyposensitisation therapy or allergy shots. In India however, Kabra says, hyposensitisation therapy is practised very rarely as patients are rarely subjected to allergy tests. Quite often, patients through their own experiences are able to identify the allergen.


A host of new medicines are also under development. Some of them seek to better the node of delivery, while others seek to optimise the chemical balances. Of all the therapies and medicines under development, omalizumab, an anti-immunoglobulin E (IgE) monoclonal antibody from Genentech/Novartis, holds the greatest promise, believe experts. The medicine is currently awaiting marketing approval. Dr Reddy's Laboratories' zafirlukast, a non-steroidal leukotriene modifier launched recently in India, too holds some potential. Leukotrienes are pro-inflammatory substances released during pathogenesis of asthma resulting in bronchoconstriction, oedema and inflammation. By selectively and competitively blocking leukotriene receptors, zafirlukast helps in effectively controlling a range of asthma symptoms and improves lung function. Available in oral pill form, just two doses a day of the drug could provide 24-hour protection from asthma attacks, claims the company. It remains to be seen how effective this new oral dosage treatment will be, given the physician's existing preference for inhalers to treat chronic patients.

Therapeutically speaking, managing the disease has improved enormously over the past 20 years due to advances in both drugs and in the way these drugs are delivered. Pharmacological treatment for asthma relies heavily on -agonists and corticosteroids. The development of both classes of drug combined with a general improvement in management means that most patients with mild or moderate asthma can have a relatively symptom-free life. Nasal sprays that treat allergies have been improving. Older versions of the nose sprays frequently caused allergic reactions because they were essentially allergen in a water solution. Using a spray, patients would endure allergy symptoms until their bodies built up a tolerance to the allergen at hand. But researchers have learned that giving patients a spray of cromolyn sodium first can stifle a nasal spray's allergy-inducing response, while still providing protection against the allergen.

Other areas of developments involve the hunt for novel allergy targets. Some also see room for improvement in existing therapies. Innovating upon the allergy-shot method, a hi-tech US-based lab recently cloned the genes for allergen contained in cat dander and ragweed pollen. With genes in hand, they isolated the most potent portions of the allergen and then used just those portions to create refined allergy shots. In theory, these shots will deliver more therapeutic punch-over the course of just a few weeks and with fewer side effects.

Many experts believe that for a complex disease like asthma such an approach would work only for a few allergen.

While the researchers practicing allopathic medicine experiment with a handful of chemicals, trying to develop the best possible mix for a drug that will be more effective and have less or no side reactions, asthmatics have survived the agony of a million gasps by trusting other schools of medicine. These complementary and alternative medicine systems work out to be cheaper and more accessible, especially in India's case.


Complementary and alternative medicine (CAM) systems may not be a part of the mainstream and conventional therapy but their popularity has only increased over time. Homeopathy, yoga, herbal medicine and nutritional therapies - all are finding an increasing number of asthma patients converting to the fold, looking for long-term and cheaper solutions.

And there are innumerable such options for the suffering to explore. Take for instance the ayurvedic herb, Coleus forskholii, which has a bronchodilating effect or the Chinese wonder herb Ginkgo biloba and Tylophora asthmatica, which improve pulmonary function.

While allopathic practitioners continue to doubt the efficacy of herbal drugs, two drugs have already been launched in the previous year -Resipicare (developed by Bafco) and Asmon (developed by the Indian Institute of Chemical Biology, Kolkata). Both manufacturers claim that their medicines effectively control asthma without any side effects. Doctors assert that herbal drugs cannot replace steroids and at best can be used along with an allopathic drug.

While these doubts may persist, a comparative study of CAM approaches done by George Lewith in Thorax finds that yoga breathing exercises - pranayama in a particular modification (called the Pink City lung exercise) is an effective therapy.

"Homeopathy too helps in improving the immunity of the patient," contends Chanda Shah, a practising homeopath in Mumbai and an asthma patient herself. She, however, recommends the usage of injections or a nebuliser in case of severe asthma attack.


But the most important weapon in the fight against asthma, believe doctors, is education. "Education should be our top priority" says S K Chhabra. "Asthma guidelines are given to general physicians abroad by associations like the British Thoracic Society or global protocols like the World Health Organisation. These should be observed here too and taught in the medical curriculum. This would go a long way in the correct diagnosis of the disease."

And it is not only about educating the asthmatics but about the doctors and medical researchers also learning more about the disease. Government agencies and research institutions in India need to wake up. The US government has specialised agencies like the National Allergy and Infectious Diseases, which specialises in research and creating awareness in public. Even the Environment Protection Agency educates about allergen like pollution due critical periods. Australia and New Zealand have special helplines and warning centres during the 'allergy seasons'. The least that the Indian government can do is enforce protocols like asthma management and create a platform for educating patients. This is true for the entire world also. Building a global research protocol on the epidemiology of the disease remains an imperative that is yet not paid attention to.

Meanwhile, scientists continue to seek a cure, attacking asthma from new directions, using a variety of disciplines - genetics, physiology, cell biology, epidemiology and immunology - to converge on the problem. That's a big change from years ago, when only allergists and lung experts studied the disease. The real challenge lies in comprehending the confounding number of triggers that push the millions of asthmatics into a paroxysm of gasps. It seems that there is no silver bullet despite so many triggers. Till one is found the sufferer will need to wait, with bated breath.