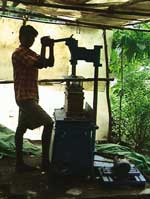 Around 2,300 tonnes of construction waste is generated in Mumbai, everyday. Authorities in the country's financial capital have very little clue about how to deal with such staggering amounts of solid waste. In September 2005, the Municipal Corporation of Greater Mumbai (mcgm) did issue the Demolition and De-Silting Waste (Management and Disposal) guidelines. But there has been little enforcement at the field level. Consequently, the debris ends up in dumping grounds, where it mixes with other waste rendering them unfit for treatment. But now, a decentralised solution for debris management, promoted by the Youth for Unity and Voluntary Action (yuva), offers hope.

The initiative has the support of City and Industrial Development Corporation (cidco), the land owning and planning authority of Navi Mumbai. The collaboration has resulted in the formation of cidco - yuva Building Centre (cybc) that has recycled over 1,500 tonnes of waste in the last four years. That's a small amount, but the project holds promise if given the right push.

The debris has been recycled into construction material such as bricks and interlocking pavers. An electric-powered machine basically used in pharmaceutical and chemical industries has been modified for the purpose. Cement and water are other inpuats. The debris is sourced from construction sites and is broken down into particles, 30-40 millimetres (mm) in diameter. The particles are then powdered down by a pulverising machine. Special screens enable the machine to ground the particles to desired levels of fineness. Coarse aggregates around 10 mm in diameter, for example, require screens with large gaps. The dust controller sections of the machine filter out unwanted light materials like wood particles and sundry other organic items.

Cement and water is then added to the pulverised material to mould it to a brick-like shape. Moulded bricks are then cured (hardened by repeated wetting and drying) for 14 days and then sun-dried. Shashank Ninave, principal of L S Raheja College of Architecture, Mumbai, approves of this method. "Over a period, all waste material loses its ability to bind. But adding cement reinforces the debris's binding qualities and it can be reused to make other products , he says. cidco and Strucwel Laboratories, Mumbai, test the products for their compliance with Indian standards on moisture absorption, compressive strength and abrasion.

Setting up the plant costs around Rs 2.5 lakh. It can recycle around a tonne of debris in a day. yuva gets its debris free and people who supply the waste are given discounts on the products. "One recycled brick costs Rs 1.35 and pavers cost Rs 16 per sq ft," explains Bejoy Davis, manager cybc. He rues that the recent increase in cement prices has made things difficult for yuva.

"Increasing demands of regular earthen bricks are being fulfilled at the cost of agricultural land. Many farmers in Mumbai's outskirts have become brick-makers and large tracts of fertile land have become barren. Loss of energy during transport is an added liability. In such a situation, debris recycling is both economical and ecological," says Davis. Two community centres in Rapar, Gujarat, one such centre in Mumbai, and a few other buildings in the country's financial capital have already used the recycled debris. But the project is facing teething troubles. Most builders claim they have not heard of this initiative. "Has the Central Building Research Institute certified it,"asks Shankar Desai, chairperson of Builders Association of India, Mumbai. Other builders too say they can't use the recycled debris till an authorised government agency certifies it.

Davis also points to other problems. "We need to set up at least one unit that can recycle 50 tonnes of debris in a day. But getting funds has been a problem. The recycling unit should be supported by mcgm's infrastructure. That doesn't always happen. The debris delivery is not very efficient," he says. The cybc manager says that some municipal authorities did visit his organisation's demonstration project and S S Shautriya of the municipality's solid waste management department seemed impressed by this technology. The municipality also suggested that yuva rope in private players. But the authorities haven't offered anything more than this.