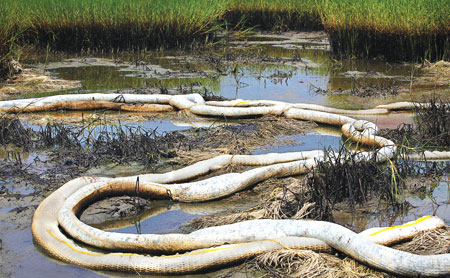 Erika, who is a photographer, and myself, headed out in a boat from Fourchon, US state Louisi ana’s southernmost port. We had four co-travellers: Jonathan Henderson from non-profit Gulf Restoration Network, his friend Randy, who is a cameraman, and Craig, our fishing captain and guide. It was August 16, the day several of Louisiana’s fisheries were reopened for catching shrimp.

We passed a fisher coming back. “How did you do out there?” Craig asked him. “Nothing. Nothing at all,” the fisher replied. “How much do you usually catch?” Craig asked. “Hundreds of pounds (a pound is 0.45 kg). Some times a thousand pou nds,” came the reply. Craig looked at me and said, “That’s not good.” Minutes later another fisher passed us. “How did you do?” Craig asked. “We caught 12,” he replied.

Before I take you through my journey, a reminder of the toxicity of the oil dispersants British Petroleum is using in the Gulf of Mexico. The US Environment Protection Agency found dispersant Corexit 9500, at a concentration of 42 parts per million, immediately killed half the shrimp tested. Most of the remaining shrimp died later.

On our journey, Craig said the water seemed odd, and “not as crisp” as it usually is. “It seems like it has cellophane over it.” He made this comment several times in the day. Given that the water had a slight chop, it was hard to see his point. But that would soon change. We arrived at Timbalier Isle, a barrier island of Timbalier Bay. After we offloaded, Jonathan called me over. His rubber boots had filled with water while wading ashore. He pulled off one of his boots and dumped the contents on the sand. 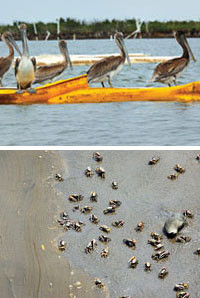 The water had a silvery sheen as it splashed onto the sand. We shook our heads. We began walking and found tar balls everywhere. In some places, there were huge mats of fresh tar. The farther inland we travelled, the worse it became. It was as though the island was a sponge filled with sheen and oil.

We walked along the bank of an inland lagoon. Fiddler crabs skittered away as we walked across the sheencovered sand. A pool was covered in brown oil. There was the silvery sheen besides, rainbow colours tracing across the surface. My stomach turned when I thou ght of those crabs and other creatures in the Gulf Coast forced to live with the oil and dispersant. We watched them move toward the water’s edge, and stop. Were they trying to enter the water, as is their nature, and could not because it was toxic? What would become of those cra bs? What would become of the marine life and wildlife that feed on crabs?

Several inland pools were literally oil pits. In one of the pools brown liquid oil floated where the sand underneath was black with crude oil. The scene was apocalyptic. Sorbent lied blackened and browned with oil it had absorbed. All we could do was take photos. The stench was overpowering. My eyes watered from the chemicals in the air, but also from sadness. My throat was sore, my voice suddenly hoarse, and I felt dizzy. I looked over to see Erika taking photos, tears running down her cheeks.

“This is one of the worst I’ve seen,” said Jonathan, who had been out investigating the results of the BP oil disaster every week since it started in April. He continued to take samples. I heard him gagging and looked over as he coughed before bending down again to take another sample. Shortly thereafter we were off, shaken by what we had seen. During the 10-minute walk back to the boat we hardly spoke. I looked out at the Gulf, the oilrigs and platforms in the distance, then down at the silvery liquid oozing out of the sand at the water’s edge as I walked along another tide pool.

Craig picked us up in the boat, and we began the trip back to Fourchon. I climbed up atop the “crow’s nest,” a small seat overlooking Craig’s boat. I wrote in my notepad about what we had just seen. About halfway back to the port we came upon a thick sheen layer covered in white foam. We stopped so that Jonathan could take more water samples. As we did so, my eyes began smarting. We carried on, only to pass more slicks like that. The entire day we had travelled more than 40 nautical miles, much of it in open Gulf waters. All the water we had boated across and all the islands we had explored were covered in sheen or oil.

From atop my platform, I was amazed at the myriad rigs and platforms we passed, sometimes resembling floating cities. Throughout the day, I kept asking myself, “What have we done?” Thousands of lives along the Gulf Coast are being devastated by this disaster. This is merely the beginning of yet another toxic epoch for the Gulf of Mexico, the people who live along the coast, the marine life and the wildlife that make their homes there.

Dahr Jamail is an American journalist