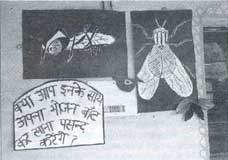 THE 2nd National Children's Science Congress (NCSC) was organised by the National Council for Science and Technology Communication (NCSTC)-network, in the last week of December 1994. With a stated objective -- to "clean up India", no less -- the congress, unfortunately, couldn't find a cleaner venue in the capital than the dusty and worn out Bharatiya Gram grounds at Nizamuddin -- thanks to the government's moneypinching. This physical discomfort did not affect the enthusiasm of 400 children from 25 states, and ncstc-network volunteers -- a network of 50 ngos and goverment bodies.

R Suresh Kumar, a 15-year-old student from Pethi Kuttai, a remote village of Coimbatore district in Tamil Nadu, presented a project on noise pollution which got him a gold medal. He selected 16 places around his village, divided each into 4 areas of different population density, and measured the noise levels with a locally designed noise-level meter. He showed that noise levels everywhere are much above the human toleration limits. Going through available scientific literature on noise pollution, he found that trees planted in a zig-zag pattern can reduce noise pollution by absorbing it. He also identified the noise-makers, and discussed regulation enforcement with the police and transport department authorities and local industries.

Sixteen-year-old Marina Mustafa and her friends from Srinagar district in Jammu & Kashmir felt that the Dal Lake, a famous tourist attraction of the region, was being constantly polluted by sewage drains from a nearby 5-star hotel and many other illegally constructed hotels. Besides, 80,000 tonnes of silt is poured out into the lake by the Tel Bal Nallah river. They found that the aquaculture in the lake is being mercilessly threatened. Moreover, the lake's area has shrunk from 24 sq km in 1931 to a mere 11.5 sq km today. Mustafa, a silver medal winner, says that their report has been brought to the notice of the chief engineer of the Dal Lake project.

In the junior category -- 10-14 years -- the gold medalist was Thakkur Sumit of the Kutch Mandvi district in Gujarat; he presented a study on superstitious beliefs prevalent in his town, and how school children actively work to eradicate social evils. P M Shyju, a 14-year-old student from the Wayanad district in Kerala demonstrated a non-toxic pest control method in 2 agricultural plots. Tulsi juice was used to attract and trap insects which despoil fruit and vegetable crops.

There were other award winners like Ritu Uniyal from Lucknow, who reviewed solid waste management techniques, and Soumya Mukherjee from Calcutta, who studied food adulteration. Yet others demonstrated simple water testing and purification methods.

The cynosure of all eyes was the original investigation by Paul Randhip and his friends at Campion Higher Secondary School, Tiruchirappalli, Tamil Nadu. Their project aimed to assess pollution caused by limestone quarries in the Ariyalur region in Tiruchirappalli. It showed how a precious 70-140 million year-old fossil bed had been eroded due to indiscriminate limestone excavation by cement industries. Displaying various fossils collected from the site, Randhip said, "If this unscientific mining continues, we will be losing a wealth of information about our historical past."

These young scientists believe that learning science through projects is more appealing than mere rote. "This is what the ncstc-network is hoping for," Says Narendra Sehgal, the network chairperson. "The science taught in schools is divorced from day-to-day problems, and the ncsc aims at encouraging the children to deal with them in a scientific way. There is a vast laboratory outside the classroom, and there is a lot of room for innovation."

The preparations for this national event were painfully delayed. Although the ministry of human resources development pledged financial support, the money was never sanctioned; the department of science and technology -- a network member -- released its cheque only a day before the congress began.

Says C Ramalingam, coordinator of the Tamil Nadu team, the overall winner, "We could not plan ahead because we were promised money from the national committee, and we had to manage other sources in the last minute." Also, the organisers reportedly sought help from Delhi's Jawaharlal Nehru University students for evaluating the reports and presentations, because some scientists refused to help.