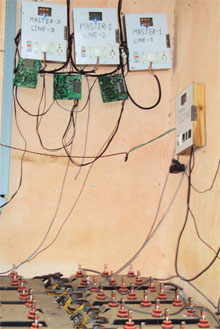 It looks no different from the regular electricity meter, but its innovative version is changing the way people use electricity and pay for it. Neechli Babhan, a small village in Rajasthan’s Pali district, has a smart meter installed in 80 of its 150 houses. The smart meter forces people to use electricity diligently.

The device gives real time information about the credit left, just like a pre-paid mobile phone does, says Mohan Singh, a daily wager. It also shows the number of hours an appliance can be used. “We have only Rs 30 left,” pitches in his 10-year-old daughter. “Please get it recharged before we run out of credit,” she tells her father, happily showing off that she can read the meter. Mohan phones Udai Singh who recharges smart meters in the hamlet. Within 10 minutes, he is in Mohan’s house with a small instrument, the size of a mobile phone, called dongle. He presses 100 on it for the Rs 100 that Mohan pays him, takes it close to the smart meter and presses a button. The meter makes a ‘click’ sound and shows Rs 130 as balance. The Rs 100 recharge can help Mohan light an 8 Watt Compact Fluorescent Lamp (CFL) for 400 hours.

The electricity comes from a 5.5-kW solar microgrid set up on the roof of a school. Neechli Babhan is off the main grid because of its rocky terrain. The power generated through solar panels is stored in batteries, which makes electricity available 24 hours a day.

The microgrid is also power theft-proof. All smart meters in the village are wirelessly connected and can be controlled online. If somebody hooks a wire on a distribution line, the meters detect it and that line shuts immediately.

The innovation is the brainchild of Yashraj Khaitan and Jacob Dickinson. Still in their late twenties, the two met in 2008 while studying engineering at the University of California, US. Khaitan belongs to Jaipur. He knew that back home, villages without power were underdeveloped. Besides, power distribution companies were facing two problems—theft and bill payment default. 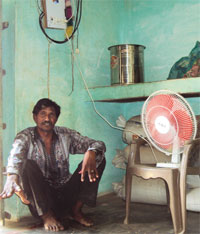 He spoke to Dickinson about it. The two started thinking how the situation could be improved. Massive penetration of mobile phones in remote parts of the country gave them the cue. They completed their course, came to Jaipur and started a company which they named Gram Power. After months of research, smart meter was born. In 2012, Gram Power installed smart microgrids in four villages in Rajasthan. It employed people like Udai Singh who recharge smart meters and get 10 per cent commission on each recharge. Gram Power holds intellectual property rights on the meter. Now the company plans to install it in 21 more villages in the state.

Gram Power charges Rs 3,500 for one connection. This is non-refundable. The connection includes a smart meter and two 8 Watt CFLS. However, the meter is not the consumer’s property.

“The pre-paid system ensures that there is no payment default,” says Khaitan. He set up the system in Neechli Babhan two months ago. Before that, people either used kerosene or Solar Home Lighting System (SHLS). Many prefer microgrid over SHLS because it is cheaper and takes more load. A regular 37 watt SHLS costs Rs 11,000. It is difficult for people to pay the amount. Unlike SHLS, which gives only two CFL points, microgrid can reach almost every room of a house. The recurring cost of battery replacement of SHLS every five years is another deterrent. In many villages, SHLSs are lying unused because people could not arrange money to replace batteries, which cost Rs 4,000 each.

For necessity, not for comfort

Smart microgrid works very well till people consider electricity as a means to illuminate their houses. No sooner do they expand its use, charges shoot up. Lighting an 8-Watt CFL for an hour costs 25 paise. So if a family uses two such CFLs for six hours a day, the monthly expenditure would be Rs 90. But if they want to run a ceiling fan or a television, power becomes expensive. Consider this. It costs Rs 2.50 to run a 70 Watt ceiling fan for an hour. So if a family wants to sleep comfortably in the night and use fan for six hours, it would cost them Rs 450 in a month. The amount can give people of Neechli Babhan, comprising mostly daily wagers, many sleepless nights. It is because of the expense that women of the village still gather under a big neem tree during the day. “We save money to use fan in the evening when our children study,” says Savita Rawat.

Service is another challenge. There have been times when Gram Power has taken 10 days to repair meters. “We have trained vendors to fix small problems. In case of big problems, we send people from our head office. But big problems are few and far between,” says Khaitan. 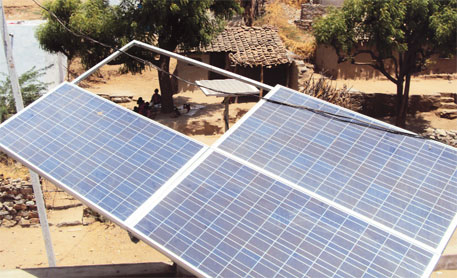 He admits the rates are steep. “That is precisely why we developed a pre-paid system. People can budget their power,” he says. “This is the best we can do, else the model will be financially unviable for the company,” he adds. The cost of power generation in microgrids below 10 kW, and with power storage is Rs 28 per unit. Khaitan charges around Rs 34 per unit from the consumer. He will recover the cost of investment in five years.

The capital cost of the smart microgrid was Rs 25 lakh. Gram Power availed 30 per cent subsidy from the Ministry of New and Renewable Energy (MNRE) on capital cost for off-grid system. The company collected Rs 2.8 lakh from households as connection charge. The rest was raised through private investors. “Low government subsidy makes it difficult for us to make financially viable projects and still supply electricity at a low rate,” says Khaitan. “Better funding mechanisms are needed. Banks should provide low interest loans to developers working in off-grid areas,” he says.

Another big challenge for microgrid developers is the fear of their grid being rendered useless once main grid reaches its area of operation. “My system is compatible with the main grid,” says Khaitan. It can be connected to the main grid and serve as the distributor.

In April this year, Forum of Regulators (FOR), a group of consultants, suggested to the government a model, called distribution franchise, for electricity distribution in off-grid areas. The state electricity regulator decides tariff based on power generation cost of the developer. But the consumer is charged the conventional tariff. The distribution company pays the difference to the developer. For example, the regulator decides the tariff as Rs 15 per unit. The consumer pays the conventional tariff, say Rs 5, to the developer. The distribution company pays the difference of Rs 10 to the developer. This will save the state electricity regulator cost of setting up infrastructure. “It is a workable model, but it is yet to be proved successful,” says Ashwin Gambhir, policy researcher with Pune-based non-profit Prayas Energy. “It is important for main grid to reach small areas because many developers charge unfair tariff from the poor and do not want the grid to reach their areas of operation. This model will help both the parties,” says Balwant Joshi of ABPS infra, Mumbai-based consultancy which prepared the report for FOR.