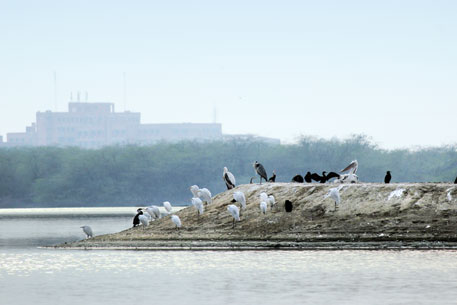 A flock of spoonbills roosts motionlessly on a small island in Keetham lake near Agra as hundreds of cormorants join them, their wings spread out. An eagle looks over from a tree-top while a flock of pelicans splashes the water. A few metres away, flamingos prepare to take flight. Within minutes the sky is filled with hundreds of them flying in curvy patterns, perhaps heading towards their nests. Everything makes for a picture-perfect evening at the Soor Sarovar Bird Sanctuary, except that towards its southern border, the sun sets a little early as a sprawling college campus casts its shadow over the lake. The Sharda Group of Institutions (SGI) allegedly violated the law to occupy land inside the bird sanctuary. Despite orders from the forest department and the Allahabad High Court to vacate the land more than a year ago, the college continues, in connivance with the state authorities.

The Uttar Pradesh government, in 1991, declared the Keetham Lake, around 18 km from Agra, and the surrounding land as Soor Sarovar Bird Sanctuary, named after the renowned Bhakti movement poet Surdas. It is considered to be an important bird habitat in north India. It supports more than 160 species of birds, including the globally threatened lesser adjutant, greater spotted eagle and Sarus crane, the state bird of Uttar Pradesh, and the near-threatened species like black-necked stork, painted stork, oriental darter, oriental white ibis, spot-billed pelican and Dalmatian pelican.

National Highway 2, which connects Delhi to Agra, forms the southern boundary of the Soor Sarovar Bird Sanctuary as per the 1991 notification. SGI bought private land stretching from NH2 to Keetham lake in the mid-1990s, got the land use changed from “agriculture” to “commercial” and constructed its first college, the Anand Engineering College, in 1998. Between 1998 and 2012, the group started three more colleges, one each for architecture, pharmacy and education, and constructed allied facilities. The campus today hosts more than 5,000 students, hostels, a stadium, labs and administrative buildings. 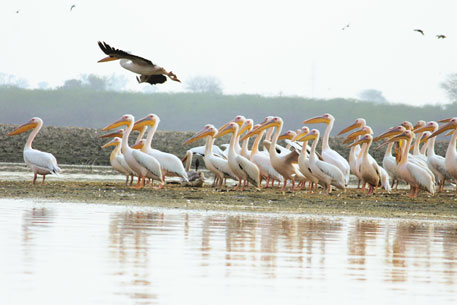 In addition to WLPA, a Supreme Court order of 2000 prohibits any non-forest activity inside a wildlife sanctuary without its permission. In 2006, the government made it mandatory for projects with a construction area of more than 20,000 square metres to get an environmental clearance. If such a project falls within 10 km of a national park or wildlife sanctuary, it requires the additional approval of the National Board of Wildlife (NBWL) Standing Committee. None of these approvals were taken by SGI for its campus at Soor Sarovar.

During an inspection of the water quality of Keetham lake in August 2012, D K Joshi, an environmentalist and member of the Supreme Court’s monitoring committee on water and air pollution in Agra, found that sewage and other effluents were being discharged into the lake by Anand Engineering College and the neighbouring Hindustan Engineering College, leading to water pollution and siltation. The multi-storeyed buildings were “adversely affecting the flight, vision and habitat of avifauna and other wildlife,” he said in his report submitted to the chairperson of the committee. There have also been occasional media reports about the death of fish and turtles in the lake because of the polluted water.

Between 2003 and 2012, the offices of the range forest officer, assistant wildlife warden of Soor Sarovar, the deputy conservator of forests (DCF), Chambal Wildlife Sanctuary, under whose jurisdiction the bird sanctuary falls, and the State Pollution Control Board sent several notices to Anand Engineering College. However, the college authorities did not pay heed.

Sujoy Banerjee, the then DCF of Chambal Wildlife Sanctuary, raided the campus of Anand Engineering College in September 2012 after receiving complaints from his staff that construction was going on in the campus without the necessary approvals. A few days later he ordered sealing of the college premises. “...Anand Engineering College is carrying out large-scale construction in violation of the rules, Acts and the Supreme Court orders, which comes under the category of encroachment in a wildlife sanctuary,” he said in his order. He gave a grace period of 20 days to the college to continue classes “in the interest of the students”.

When the college did not stop functioning after the grace period, Banerjee wrote several letters to the district collector for administrative and police support. The administration passed the buck to the forest department. Meanwhile, Anand college approached the Allahabad High Court for a stay on the DCF’s order. The court, however, directed the district magistrate of Agra to ensure “strict compliance” of the order.

This did not happen despite several reminders from the forest department. Banerjee then filed an FIR against Y K Gupta, vice-chairperson of SGI, Dinesh Saxena, registrar of Anand Engineering College and S R Chaudhary, director of the college. But the police did not take any action against the accused. “It seemed the whole machinery had been providing patronage to the college. The then senior superintendent of police shared the dais with Gupta at a function in the college barely two months after the FIR was lodged,” Joshi says.

Banerjee kept writing to the district administration and other top officials in the forest department, pressing for the implementation of the high court’s order, but his efforts proved futile. He was transferred from his post in mid- 2013. Down To Earth has copies of all the documents, notices and court orders. When the magazine contacted Banerjee, he refused to comment on the matter.

In September 2012, the Uttar Pradesh government had constituted a committee under P K Sharma, chief conservator of forests, Agra, to look into the alleged illegal activities of Anand college. The committee is yet to submit its report. The forest department, however, claims that the college had stopped discharging effluents into the lake after it started taking action in late 2012.

Meanwhile, Gupta has denied the allegations. He says that the district magistrate of Agra had issued an order in 2008 to keep all private land out of the sanctuary and hence there has been no violation. Joshi counters this by saying that the district collector has no power to arbitrarily keep some land out of the sanctuary after its boundaries are notified. Besides, the college, which falls within 10 km of the sanctuary, has still not obtained the permission of NBWL. “From listing of court hearings to delay in inquiry reports to manipulation of orders, everything is being done by the state to protect the interests of a big corporate,” he alleges.

This is quite apparent. While the allegations against the college are under investigation, the State Environment Impact Assessment Authority went ahead and gave environmental clearance to SGI in August last year to expand its campus around Keetham lake.