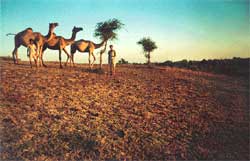 Theirs is no romantic tale of the desert. Rather the plight of camel herders of Rajasthan today is that of an endless struggle for survival. Time was when Virma Ram proudly watched his herd of camels stretch in an endless line along the dusty horizon. Today, his gaze has turned into a blank stare as the prospect of maintaining his precious livestock appears bleak. What with lack of available pasture and veterinary care, economic hardships are forcing the keepers of the single-humped camel (Camelus dromedaries ) -- the Raika and the Rebari communities of Rajasthan -- to abandon their time-honoured occupation in search of alternative sources of livelihood.

Hailing from Mundra village in Pali district of the state, Virma Ram dismally states: "We, the Godwar Raika community people, have been breeding camels for centuries. Our main livelihood source is the camel. However, our animals are falling victim to a number of diseases, while the health care remains insufficient. We have to pay for grazing in the forest area and the drought during the last few years has added to our misery."

The Rebari camel breeders, from Chittorgarh area in Rajasthan, have moved to Mandsaur district of Madhya Pradesh for economic reasons. Faced with decimating numbers of their traditional Mewari and Marwari breeds, they are even seeking to cross them with high milk-yielding Malvi breed there. If this trend is allowed to continue unchecked, say the herders, it would lead to further decline in the breeds' numbers.

The traditional breeders are today caught in a cleft stick, as sustaining the pastoral activity has turned into a mirage. The last twenty years witnessed a rapid decline in the population of single-humped camel dominating the northwestern part of the country. While the adult population showed a marginal decrease from 1,035,000 in 1987 to 1,001,000 in 1992, the number of young camels came down by an alarming 50 per cent in these years.

Since camels represent the only livestock in India whose population is showing a downward swing, their declining numbers has serious implications for the rural infrastructure in the arid and semi-arid parts of western India, where they are still the prime mode of transport. It is also an indication of the economic pressures faced by the weaker and marginalized segments of the society like the Raikas. Says Virma Ram: "Lack of proper support from the government has forced our children to migrate for jobs or work as manual labourers. All these factors have reduced the number of camels in the village from 1000 to a mere 50 in the last ten years." Similar sentiments are echoed by Tula Ram: "We need land and trees to sustain our life with camels. Otherwise we have to search for other jobs."

Making matters worse, a spate of recurring diseases is taking the toll on the camel population. The two infectious diseases that strike these animals and translate in the biggest economic losses are trypanosomasis , which is caused by flea bite and if untreated can lead to sudden death, and mange -- a skin disease which is fatal and difficult to eradicate. Also, if a camel is affected by Madrali (epilepsy), it has to die.

The situation is compounded by the fact that the role of camel pastoralism in India is still recognised only for transport and as a draft animal. This is unlike Africa and other countries where camel pastoralism is also linked to food production and food security in drought prone areas. In some parts here, it has gained importance as a milk producer but this practice is yet to gain widespread acceptance. Ilse Kohler-Rollefson, project coordinator of League for Pastoral Peoples, Germany, who is helping the Lokhit Pashu Palak Sansthan (pastoral people's organization) involved in conservation of camels says, "It is not possible to maintain the camel as a part of India's domestic biodiversity without the active involvement of the hereditary camel breeders. Development efforts and support programmes have to be oriented towards fulfilling their need. It is quite clear that unless and until camel breeding once again becomes economically rewarding, all research and support will be moot."

The Raika are a good source of information in regards to traits and advantages of the local breeds and strains. The community keeps oral record of genealogies, tracing the ancestry of their herds in female lines. They seem to conceive the breeding stock more as a communal heritage rather than as private property. However, sale of female camels to anybody outside the community is traditionally forbidden. Mota Ram, sporting a red turban -- the traditional mark of the Marwar Raika, of Batoon village in Pali district, explains: "Female animals usually change ownership only on the occasion of marriages, being sent as dhamini (dowry) when the bride joins her inlaws." Jula Ram from the same village adds, "Females are also donated sometimes to people belonging to another village free of cost to start their own business." But the situation is rapidly changing. "Now we prefer sheep instead of camels because they are more beneficial and can be sustained on less food. They are hardy animals and provide more milk. Even their wool is selling at a better price," says Kanha Ram.

The Convention on Biological Diversity (cbd), to which India is a signatory, provides a legal tool for the Raika and Rebari to press for the benefits of free aid for their animals' health and maintenance in return for the role they play as guardians of livestock genetic diversity. In view of frequent droughts and rapidly depleting groundwater in Rajasthan, camel pastoralism probably represents by far the most sustainable land use option. But with this activity on decline, the only choice before the camel communities appears to be merging with urban labour force. If that happens, it will further push these camels to the brink of extinction.