But what has the state done?

But what has the state done? 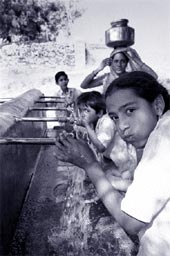 The 1970s and 1980s were a time of massive state investment in rural water development. Not only had more land to be brought under irrigation, but also drinking water supplied. These decades saw an exponential rise in the number of privately-owned pumpsets and wells, even as investment in public wells remained flat. Encouraged by state subsidies on diesel and electricity, people put their money on diesel pumps and then submersible pumps (as water levels went down). The land was literally pockmarked with borewells; the race to reach the bottom of the aquifer had begun.

The government launched the Accelerated Rural Water Supply Programme in 1971-72. The aim was to assist states and union territories to increase the pace of coverage of drinking water supply in the country. The entire programme was given a mission approach in 1986, with the launch of the Technology Mission of Drinking Water and Related Water Management, also known as the National Drinking Water Mission (ndwm). ndwm was renamed as the Rajiv Gandhi National Drinking Water Mission (rgndwm) in 1991, which is at present managed by the Union ministry of rural development. The pace did increase. In the 1980s, called the decade of drinking water, international agencies such as the United Nations Children's Fund (unicef) lent their hand. The ubiquituous Mark II handpump became a symbol of rural relief.

In all this, nary a thought was given to the source of national gratification: groundwater. Even less was given to the groundwater quality that handpumps were regurgitating. A unicef paper, Mitigating fluorosis through safe drinking water, points out that "due to the inadequacy of water-quality monitoring infrastructure and the supply-driven nature of the government programme involving some three million deep-well handpumps during 1977-1997, water quality testing did not receive the desired attention".

Then came the 1990s. Even as scientists and the research community -- belatedly; the damage was done -- began to suggest that the "water development" mindset had to be replaced by a "water management" paradigm, the government found itself in the quagmire of fluorosis.

Its reaction has been astounding:

disavowal: "Up till 1998, we at the Centre used to directly fund programmes on fluorosis control in states, but after 1998 the power was delegated to states. Funds are provided to states, which then plan on their own. We have told the states to use 20 per cent of the total budget money for water quality related issues, but it is not mandatory and not many states are hence spending money on water quality," informs Kumar Alok, deputy secretary, rgndwm. Writes A K Susheela (in her paper Sound Planning and Implementation of fluoride and fluorosis mitigation programme in an endemic village): "The investment and efforts made through water supply agencies/public health engineering departments in the endemic states have to a great extent not yielded successful results."

dismay: "We have not studied the problem of fluorosis with prevention as the objective. And we have not invested enough finances into this. We are only reacting to fluorosis and not making use of our predictive capabilities," says Gupta. A senior rgndwm official says the states do not have the technology to ascertain the extent of fluoride pollution.

off-the-field bravado: "Using Narmada and its sister rivers, we will provide safe (piped) drinking water to all the villages in Saurashtra by 2005 and then cover the whole state by 2007," claims K K Jadeja, director of Gujarat Jalsewa Training Institute (gjti), Gandhinagar, Gujarat. But a visit to the areas covered under this scheme of the state shatters such piped dreams. Villagers have punctured the pipelines and the subsidised water merely spills about. "We understand that people have broken the pipelines and are stealing water, but what can we do. We cannot have policemen all along the pipeline," says a gwssb official. True, but also, how sustainable are these programmes? "Villages in Amreli are being supplied water under the Kalubhar dam scheme through a 65 km long pipeline. The cost of water supply to the government is Rs 3 per litre. But people are expected to pay only Rs 14 per head per annum, which they are not ready to pay," says Vandana Pandaya, former project associate with Ahmedabad-based Centre for Environment Education. The state government realises the huge costs involved. "Supplying piped water is expensive, especially when it has to be highly subsidised. Gujarat government approached the World Bank to fund the scheme in the state. But the Bank refused on the grounds that there was no sustainability of such a scheme," informs a gwssb official. The state government is hopeful of the scheme. "Soon we will fix water tariff in the state. Industries will be expected to pay a higher price and the money hence generated would be used to subsidise water supply to villages," claims Jadeja. "Any government scheme will not succeed if local people are not involved as there will be no one to maintain the system. If people are made to pay even 10 per cent of the total project cost, they will own up the system," says Gurdhanbhai of Balisana village in Patan district of Gujarat.

People also understand that they cannot depend on government for regular water supply. "Piped water is not supplied regularly. Rich villagers have constructed underground tanks for storage of water, whereas the poor continue to drink poison extracted deep from the ground," says Sakeenabehan of Methan village in Gujarat. In village Gondaran, water is supplied once in three days with no fixed timings and gets distributed on first come first serve basis. Even worse, neighbouring Haripur village had not been supplied water for the last 10 days when the Down To Earth reporter visited the village.

motivated intentions: In Gujarat, the state government is working on a war footing to provide piped drinking water to villages, sourced from small dams. The Dharoi (dam) water supply is already supplying water to 550 villages and eight towns in Mehsana and Patan district. Kalubhar (dam) supplies water to 42 villages in Lathi-Liliya talukas in Amreli district. But, "There is clear cut politics in supplying water to villages. It is a common feature that backward villages are not covered under the scheme and water is first supplied in villages which have political patronage," says 80-year-old Khodidas Dhakkar of Liliya. Kishore Parmar of Gondaran complains that in his village, backward classes have only one stand post for water supply, whereas the rest of the village has three such standposts.

non-seriousness: There is no standard protocol to test fluoride in water (see box: Wah standards). States follow their own procedures. Testing equipments vary from laboratory to laboratory. Not all water sources are tested for fluoride. "There are 40 lakh handpumps in India. How feasible is it to test water of all these handpumps on periodic basis?" asks Alok.

technological failure: The Indian government has failed to provide -- and failed to administer -- appropriate technology, either to detect fluoride, or to clean fluoride-ridden water.

plain refusal: The district officials of Sonbhadra in Uttar Pradesh refused to study the 'strange' disease people were suffering from in Rohaniya Damar for last 10 years. It was only in 2001 -- when Allahabad-based Christian missionary group, Diocesan Development and Welfare Society, filed a public interest litigation in the Allahabad High court (hc) -- that authorities took notice (see: 'State sponsors disability', December 31, 2002). The case is still with the hc