What were The Royal Indian Engineering College grads really up to? A history... 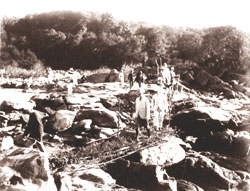 The brief history of The Royal Indian Engineering College puts in proper perspective British attempts to colonise nature, resulting in disastrous consequences for populations throughout the empire. The British Raj's grand scheme for engineers envisaged a role extending far beyond mere designing of construction projects. This piece delves into an ill-conceived imperial attempt to make civil servants of engineers, disastrously undermining their core competence.

By the middle of the nineteenth century utilitarianism had reached its zenith. The British considered progress in the colonies beneficial to the natives, as well as symbolic of imperial purpose. Public works in colonial India began to take on a special significance that extended beyond their obvious utility. This led to a rapid increase in the construction of railways, dams and bridges in India. To keep up, Governor General Lord Dalhousie formed a new civil department to oversee railway and irrigation projects. Demand for engineers increased multifold.

At the time there were no engineering colleges in England. In contrast, there were several excellent colleges in India, such as the Thomason Civil Engineering College at Roorkee. But graduates of Indian colleges were not highly regarded, as they had been deprived of the benefits of European civilisation! Prevailing thought held that India-educated engineers could not be counted upon to preserve imperial control. To fill this vacuum, the idea of a Royal Indian Engineering College based in England was mooted.

The college was founded in 1872 at Coopers Hill, twenty miles from London, with the aim of producing not just engineers, but architects of empire. Coopers Hill was modelled on the East India Company Training College at Haileybury, the foremost coaching centre for civil servants. The engineering students were to be trained as rulers and not mere scholars. Camaraderie, Esprit de Corps and a soldierly 'can-do' attitude were considered more important than knowledge of colonial conditions.

The training at indigenous colleges was actually superior as students could experience first-hand the geology and other environmental characteristics of the country. But these were considered less important. The England-based college strove more to teach students to exercise imperial control and less to properly implement engineering projects.

At Coopers Hill, a sense of noblesse oblige prevailed. Building monuments to the empire would not only legitimise imperialism but impress the local populace as well. The ideal Coopers Hill graduate would go on to wipe out famine in the colonies with irrigation canals and build railways through dense jungles to the everlasting gratitude of the awed natives.

The bridge and the dam were an end in itself, rather than a means to cross a river or control flooding. They were as much symbols of imperial control as the India Gate. These structures began to represent the "superiority" of European civilisation not only to indigenous public works, but to the Indian people themselves. Coopers Hill men found similarities between the people and the environment of India. Their mission therefore matched the colonial government's with regard to society and nature: both were to be civilised.
The Royal Indian Engineers even caught Kipling's eye. In his essay, "The Bridge Builders," the foremost portrayer of the romantic Raj tells the story of two Coopers Hill graduates, Findlayson and Hitchcock, completing work on a pukka bridge across the Ganga. Findlayson, the chief engineer, sees the bridge as his legacy, to endure "long after all memory of the builder had perished."

Coopers Hill students had an abiding faith that nature was no match for Christian civilisation and modern technology. The "superiority" of imperial engineering was also used unabashedly to champion Christian supremacy. Public works thus became tools for religious proselytising. In "The Bridge Builders," Findlayson's bridge is severely tested by a flood, but it holds. Findlayson, having overdosed on opium, dreams of Hindu gods discussing the bridge's relevance to India. When the bridge does not fail, Krishna sees the engineering feats of "the men from across the water" as a direct threat to the popularity of the native Gods.

Sir Arthur Cotton, chief engineer of the Madras Presidency in the 1850s, could have been the inspiration for "The Bridge Builders". Cotton endorsed the religious importance of public works claiming, "In [any] district where our Western knowledge and energy have been brought to bear, the people freely acknowledge that it is to Europeans and Christians that they are indebted for benefits they never received from their own government and their own Gods."

The men of Coopers Hill held Cotton in high esteem because he exemplified the Christian concept of civilisation. This spirit was as essential as were the constructed monuments themselves. India became a social laboratory where these men could carry out their Christian duty. Sir Alex Taylor, president of the college from 1880 to 1896, claimed that Europeans were able to subjugate Asia not through brute force or greater intellect, but because they possessed such Christian virtues as toughness and altruism.


Sir Arthur Cotton was popular for engineering reasons too. He was hailed as the tamer of the entire Godavari river system in the early 1850s. Cotton thus embodied the essential Coopers Hill spirit of empire. The civilised river systems of India symbolised the very purpose of empire building.

Cotton was obsessed with building navigable irrigation canals on every major river in India. He even envisioned a network of navigable canals to replace the railways in India! His hair-brained schemes eventually led him into disgrace. But at the time, the proposal was not considered all that far-fetched.

Cotton's reputation resulted in a boom in irrigation, beginning in 1854. Companies of water merchants in London proposed investing 300 million pounds in the Madras Irrigation Company and the Orissa Irrigation Company, hoping to rake in huge profits from transportation and agricultural use of the canals. The scheme was stymied by the 1857 rebellion, and by 1880 both companies had failed.


In 1858, Cotton claimed after inspecting the Mahanadi river delta, "A delta is a delta all over the world... it was not necessary that I should have any personal acquaintance with this tract." To the imperial engineers, since public works were to be symbols of the Raj, nature's uniqueness could be disregarded. Civilisation essentially meant commodification of nature.

Though Coopers Hill men were apprenticed to projects exclusively in Britain, they ended up working in Egypt, Uganda and the West Indies. These men travelled around the world with an environmental ethos peculiar to Europe. Training in European river basins (where the rainfall was predictable and river movement moderate) made them think that the Thames was no different from the Mahanadi, the Irrawaddy or the Nile. It took fifty years of catastrophic flooding along the Mahanadi and the concurrent failure of the original Aswan Dam for the engineers to reluctantly admit that local variations matter.

By then, the type of education instilled at the Royal Indian Engineering College at Coopers Hill had wreaked extensive damage not only in India but throughout the empire.

By the time it closed in 1906, the institution had supplied 764 appointees to the public works department, 84 to the telegraph department, and 162 to the forest department. The Times noted in its epitaph that the institution's "subversion has never been explained, and it has never been justified. All that can be said is that it was this country and not India that overthrew it, and that it has established honourable records wherever British Engineers have carried out great works."

Christopher Hill chairs the history department at the University of Colorado at Colorado Springs and specialises in Asian history; Arjun Mandaiker is a senior sub-editor at Down To Earth