Will the world move towards a more fair and environmentally just future?

That the delegates could not agree on the vital portions of the political statement during the fortnight of informal and formal negotiations spoke volumes on the summit’s failures. And being unable to reach an agreement on a political statement which contained 26 paragraphs outlining the programme for further implementation of Agenda 21, the world leaders finally settled for a statement of commitment containing six paragraphs. The statement of commitment reaffirmed the Agenda 21 as a fundamental programme of action for achieving sustainable development. 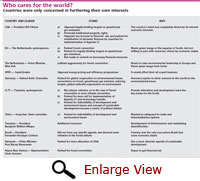 Among several unagreed issues in the political statement was the para on finance, the contentious issue being the South wanting the developed countries to fulfill their commitment of giving ODA as agreed in Rio, while the North shirking from such commitment. In a last effort to solve the impasse, cochair for the session Jan Pronk, The Netherlands minister of development cooperation, had suggested inclusion of a statement of commitment from the developed world to reverse the declining ODA by the end of the century. However, Germany, France and Canada strongly resisted this and said that they were in no position to state if the decline can be reversed soon. The US also generated a controversy when it said that it had not signed on all the commitments that were made in Rio. “We didn’t make them because we didn’t think we could keep them. I don’t think we can now.”

The above debate showed that the stance of countries on finance had hardened and not softened after the negotiations. Some like the US did not in the least care for the world opinion on various issues. Nations mouthed the word ‘sustainable development’ very easily, but nobody wanted to nurture it or take responsibility for it.

The Summit thus came to an end without any significant agreements by the world community on the issues of world importance. At the end of the Summit, it was clear that neither the North nor the South had gained or lost anything, but the world was not even a step further towards more just and fair environmental governance. The zero sum game was the net output of the Earth Summit II.

Think locally, don’t act at all

In sharp criticism to the outcome of the summit, Razali Ismail of Malaysia, the UN General Assembly President said “The world has failed to achieve many of the ambitious goals for protecting the planet set five years ago in Rio de Janeiro…Lets call a spade a spade. More than five years, not enough has been done.” Razali described the failure to live up to the promise of Rio as an “absence of political will”.

Echoing Razali’s words, Tanzania’s UN ambassador, Daudi Ngelautwa Mwakawago representing the G-77 feelings of the outcome said, “The world is crying for positive answers. This session has not provided them.” Kevin Dunion, chairperson of Friends of Earth International said, “This Summit reveals a scandalous betrayal of the promises raised at Rio. And now after two weeks of negotiations we have an utterly shameful outcome from Earth Summit II. The political will demonstrated here is entirely inadequate to meeting the challenges of sustainable development.”

Several NGOs also expressed their frustration over the summit outcome. Wangari Mathai, the renowned environmentalist from Kenya said, “On listening to and monitoring the long negotiations between the various power blocs and political interest, we want to express our deep concern that many of the commitments and targets agreed upon five years ago at the Earth Summit remain unfulfilled.”

The sense of failure felt by every sensitive and concerned person attending the Summit is aptly reflected through the Swedish environment minister Anna Lindh’s remarks, “Before the event, everyone talked about a follow-up of Rio. Now they are saying, “Lets not take a step backward”.