Mills of Gorakhpur grind slowly, but they grind too fine 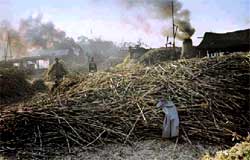 Gorakhpur district of Uttar Pradesh (up), a major sugarcane production centre in the country, is in the grip of severe air pollution, caused by unlicensed sugarcane crushing units. Only nine of 21 mills with a license function leaving the field open to thousands of illicit units. There are almost 400 at Sukroli, a small village in the district's Kushinagar division.

Says Harinder Tripathi, a sugarcane farmer from Sukroli, "My co-agriculturists in the district prefer to supply sugarcane to these unlicensed crushing units. Actually, we have very little option. Most of the government-owned mills have closed down and the private units with a license are always on the look out to short change us." Shambu Prasad, a leader of Kushinagar's farmers' union, elaborates: "Gorakhpur's farmers lost faith in these licensed private sugar mills in 1995. That year, the Sadder Nagar Sugar Mill in Kushinagar duped us of Rs 28 crores. We have not got our dues, even today." R P N Singh, Kushinagar's mla adds, "Private mill owners in Gorakhpur owe the region's farmers around 40-45 crores." At this, Mayo Kumar, the owner of one unlicensed crushing units, retorts, "Much in contrast to these big units, we pay farmers immediately after getting the sugarcane supply."

There are other reasons that draw Gorakhpur's sugarcane farmers to the illicit units. The government mills and the licensed private mills pay the farmers at a pre-fixed rate. In contrast, the farmers can negotiate and bargain for better returns from the unlicensed ones. The illegal mills score over the legal ones in another area. They give the sugarcane farmers a share after sellling the alcohol (usually in illegal markets), made after processing molasses -- one of the by-products of sugarcance crushing.

The unlicensed units use a machine, powered by a diesel generator -- the licensed units run by on electricity. Fumes from burning diesel combine with smoke emitted by burning kolu -- residue of the crushed sugarcane used to manufacture jaggery -- play havoc with the health of people in the region. Besides, the unprocessed molasses form breeding grounds for mosquitoes. Some effluents have even polluted Gorakhpur's drinking water.

Says Paras Nath a physician who has practised in Sukroli for the past 27 years. "The mushrooming of these illicit units in the last 10 years or so has made Gorakhpur into a cauldron of numerous diseases. Respiratory problems have multiplied and the numbers of tuberculosis patients have increased manifold, so have the numbers of those with occular problems. Rheumatism has also become a common health problem." Shiraz A Wazih of the ngo G orakhpur Environmental Action Group agrees and says that the government should take action action against the recalcitrant mills.

But Wazih also believes that closing down these units would not solve the problem. "The government needs to open more mills. After all, nearly 90 per cent of people in the district depend on sugarcane-related industries for their livelihood," he reasons.

"The government is blind to our problems. We have complained to the district authorities on numerous, occasions, but nothing has changed on ground. Even our pleas to the state government have gone unheeded," says local politicain Subash Pandey Mangal. Prabhu Dayal Shrivas, Kushinagar's collector, however, disclaims that the area has any pollution problem. "We would take action against these units if there are complaints against them. I have not received any complaints of air pollution by illegal crushing units. We also don't know of any report incriminating them for pollution," he says.

Says R P N Singh, "The state government's policies are completely against the interests of sugarcane farmers. They have increased the transport prices of sugarcane. So farmers have very little option but turn to the illicit units, which are almost at their doorsteps."

R P N Singh also believes that more government run crushing units would improve matters. But says Sandeep Kumar, a professor of economics of Gorakhpur University, "Lack of power supply is the main reason for the underperformance of government-run mills." Besides, most government mills in the area date back to the 1970s -- some are even of 1950s vintage. The government had done nothing to improve their technological acumen. "A corrupt bureaucracy compounded the situation and finally, the authorities had no option but to take recourse to privatisation," notes Sandeep Kumar.

R P N Singh's, however, believes that government run units can still work. "For this to happen, the government has to make sure that farmers get adequate proper power supply is provided to the farmers. Power privatisation has compounded their woes." The combative mla adds, "We will pressurise the government into making sure that the private mill owners pay their dues to the farmers. If they still default, the government should sell their units and recover the outstanding amount."

Meanwhile media reports have it that two more government units in Gorakhpur -- at Kushinagar and at Ghugli -- are to be handed over to the private sector on a 30-year management lease contract basis.


Rajesh Jaiswal, the pradhan of Sukroli, sums up the problems of the area's population: "We are in quite a hopeless situation. Many of us know that the illegal mills are at the root of our health problems. We can only hope that the government opens more mills."

And here is one way it can. Baggasse, one of the by-products of crushing sugarcane, could be the solution to the power problem faced by the sugarcane crushing units. Says Mahesh Trivedi, chairperson of up Non-Conventional Energy Agency, "Nearly 4-5 lakh tonnes of bagasse is wasted every year in this region. This agro-waste can generate about 200 megawatt (mw) of power, every year. The nine functioning mills in the district require about 100 mw. So, tapping all the bagasse can actually help open up more sugar mills in the district." But only two out of the nine working units in Gorakhpur can lay any claim to utilsing this agro-waste.