Of your waste, the government needs to tell the plastic industry. Other countries have done so. At times, to developing nations' detriment. India needs to learn and adapt 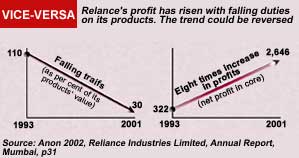 While the Indian government appeases the plastic industry, other countries have gone ahead and seen to it that the plastic industry owns up responsibility for its products. They have ably used extended producer responsibility (epr) to get the industry to clean up its act. A select group of countries have become leaders by actually phasing out the use of poly vinyl chloride (pvc). Slovakia, for instance has legislated to phase out pvc by 2008. Berlin has banned use of pvc in construction. Some polymer-using companies, such as Sharp of Japan, too have decided to take the right step and phase out pvc from their products.

But these specific product-centric actions are not the panacea. epr can help if applied irrespective of national boundaries. It requires that the producers take responsibility of their products right from production to final disposal. The producing company's responsibility stretches to cover all countries that its products land up in. Once the industry realises that it will have to pay through its nose to safely discard the dangerous contents in its products, it can either find alternatives to these products or find a way to manage them. Thomas Lindhqvist, professor at International Institute for Industrial Environmental Economics (iiiee) , Sweden, says, " epr ensures that the cost of waste management gets internalised in the cost of the product. Thus the cost of the product goes up, which in turn dissuades consumers from using it."

The European Union (eu) has used epr. But it's limited the liability of the companies, in some cases to within the member countries' boundaries, says Kisan Mehta.

A 1994 eu directive places responsibility on the member countries to set recovery target of packaging, either through energy recovery or recycling. The directive prioritises prevention of packaging waste, followed by reuse, recycling and other forms of recovery. The directive sets a 50-65 per cent recovery target to be achieved by the member states. Sweden goes a step further and sets up a 90 per cent recycling target for polyethylene terephthalate (pet) bottles. The companies that use them have to ensure they are taken back from the consumer. "In 1999, we achieved pet recycling target of 91 per cent for re-fillable bottles," tells Naoko Tojo, research associate at iiiee .

In Germany a monopolist Deutsche Gesellschaft fur Kunststoff-Recycling GmbH (dkr) is the guarantor for proper recycling of plastic packaging under the country's laws. It is responsible for accepting and organising the recycling of plastic packaging for which the producer companies pay a licence fee. In return they are allowed to put a trademark green-coloured dot on their products giving their products an edge in the market. As a result Germany has used 1.5 million tonnes less of packaging material in 1998 when compared to 1991. "Since companies have to pay the 'green dot company' in advance for the collection of packaging waste, they have in fact redesigned packaging of products to be less wasteful," says Gerard McGovern, director of Association for Industry Responsibility in Waste Management, based in Hamburg,Germany.


Though such directives work in the the North, they at times do so at the cost of developing countries. When the producer's responsibility is limited to a countries political boundary it becomes easy to export the waste to other countries, such as India, where environmental norms are lax. This is fast becoming a reality, says Mehta.

For India, the time is running out. It has to regulate the domestic plastic industry and check imports of plastic waste or implode with garbage that the North exports and the ones Indian companies keep churning out.

In fact, as Chaturvedi suggests, it has to go a step ahead of the eu and other countries. It has to ensure that environmental laws cleanse the ever-increasing small scale recycling trade of the country as well. epr, in India has to cover for the health of the rag picker also who right now does the job for a pittance. India has to learn from the North and do one better if it has to meet the environmental challenge and yet not harm its economy. This is the challenge staring India in its face. But to meet the challenge the government needs to do more than put up a plastic smile at 'stop polybag' meets.