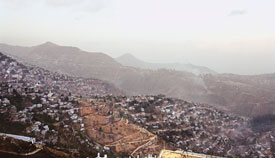 The city enjoys an average annual rainfall of 2,500 millimetres . Traditionally, this has been the only source of water and was very popular among residents. Traditional Mizo houses have a sloping roof designed for rainwater harvesting. Water from the rooftops flows through gutters made of bamboo or metal sheets and collects in rainwater tanks made of galvanised tin sheets.

An underground reservoir of 5,400-kilolitre (kl) capacity was constructed on an Aizawl hilltop by British civil servants, a hundred years ago. A major part of the town relied on this reservoir for its water. But the scenario has changed.

Two water reservoirs of 8,000-kl total capacity were constructed in 1953-1954 at Laiputtlang, a high area in the city, to harvest rainwater, but soon the demand outgrew supply. A fresh search for water began in 1961. Two rivers, the Chite Lui and Ser Lui were surveyed but they were also found inadequate. Tlawng, a river located 18 km west and more than a 1,000 m below the city was later identified as a probable source. In 1964, the quest for rainwater harvesting was abandoned and the first piped water scheme to supply 67.5 litre per capita per day (lpcd) to the city commenced. The project, based on the 1963 population figure of 20,000, was completed in 1972.

Phase i of the Greater Aizawl Water Supply Project (gawsp) started in 1983 and aimed at supplying 10.8 million litre per day (mld) to a population of 80,000. Under this scheme, completed in 1988, water was pumped from the Tlawng to a height of 1,045 m. This is the second highest water supply project after the one in Shimla. It resulted in exorbitantly high operation and maintenance costs and became a major concern for the sustainability of the project. By the time the project was completed, the population outgrew the estimated capacity. The leakage loss also went up by 35 per cent and the search for water recommenced.

The Phase i water supply scheme was designed to cover only central and southern Aizawl, but on public demand, water was distributed to the entire city. This meant a very low water supply of 35 lpcd, which was grossly inadequate. The scheme covered 38 village council areas, leaving 35 villages without piped water (see map: Phase out). Of the 38 village council areas, families with private water connections receive water for roughly 45 minutes per week.

A small dam was later constructed on the Tlawng river. Water was pumped into an overhead reservoir and flowed on account of gravity into individual homes. This, however, led to high frictional losses and caused low pressures. phed estimates the present level of unaccounted water at about 35 per cent , but in reality it is much more, says Dunglena, a retired phed engineer.

To supplement the current water shortage, the government launched Phase ii of the gawsp with the aim of supplying an additional 24 mld of water to cover an area of 128.9 sq km. The combined production of 34.90 mld from both phases is planned for a population base of 380,000 in 2026 and will pump 78 lpcd of water with provisions for 15 per cent losses.

After spending more than Rs 21.27 crore annually on operation and maintenance, phed is still unable to meet the increasing demand. Currently, about 10.8 mld of water is supplied through this arrangement, whereas the demand calculated at 100 lpcd is 24 mld. phed had made water distribution arrangements through 20,000 home connections and 480 community hand pumps during 2004. The present supply amounts to a per capita supply of 44 lpcd partly covering the city. If all the people in Greater Aizawl were to be served by phed, the per capita supply would fall to 28 lpcd.

A study conducted in 2005 by the Centre for Peace and Development (cpd), an Aizawl-based ngo, found that the per capita water supply of 35-40 lpcd was very low when compared to the national standard of 135 lpcd. cpd's report also found a huge gap of 22.95 mld in the current supply.

phed recovers only Rs 2.55 crore through water bills. This is 12 per cent of the total expenditure. The state government grants an annual subsidy of Rs 18 crore, while funds from the Asian Development Bank (adb) are expected for the project's completion.

On account of financial constraints, Phase ii was bifurcated. Part i of Phase ii of gawsp is now nearing completion and aims at bringing an additional 12 mld of water at a cost Rs 113.47 crore. In 1997, the project cost was estimated at Rs 71.80 crore and had plans to supply 78 lpcd of water to 300,000 people. The project cost almost doubled on account of delays in implementation at various stages.
"We received a grant of Rs 13 crore from the central government and work will be completed during the 2006 financial year," says Tawnluia, minister in charge of phed. The revised estimate approved by the Central Public Health and Environmental Engineering Organisation (cpheeo) is Rs 113 crore, of which, 25 per cent funding will come from the state and the remaining from the Centre. Part ii of Phase ii, will be funded by the adb. "The existing pipelines cannot take on the additional water that is to be pumped and installation of new lines will hike up the cost further," says Dunglena. He also points out many loopholes in the scheme. "There are a number of shortcomings in the Phase ii scheme. Firstly, it is the insufficient capacity of the installed pumps to pump an additional 12 mld of water Secondly, improvements in the distribution system are necessary to bring about a better quality water supply for residents," he adds.


The water scarcity, given the inadequacy of piped water and decay of traditional systems, has paved the way for private water-tanker owners to collect water from springs and sell it through 15 water points in the city.

Lallianmawia, owner of Galiliwater point on Tlawng road, says that he collects and stores water in tanks and charges Rs 250 for a 10 kl tanker. The buyer in turn, sells the water for amounts between Rs 1,200 to Rs 1,800. The rate varies, depending upon the demand and distance. Lallianmawia says the spring water was tested by phed and found suitable and says business is good during summers.


What makes matters worse is that spring water is also under threat for lack of an effective sewerage system in the city. Lalduhwma, member secretary of the Mizoram Pollution Control Board (mpcb), says seepage from the soak pits and discharge of sewage from households are polluting this delicate source. mpcb findings confirm this, though it only monitors chemical content and is unable to look into the biological characteristics like Biological Oxygen Demand (bod) and faecal coliform due to lack of infrastructure.

On monitoring the two springs, Mission Vengthlang Tuikhur in the south and Ramhlun North Tuikhur in the north, it was found that dissolved oxygen levels were as low as 2.4 milligrammes (mg)/l and 4.6 mg/l in October 2005. The normal range in treated drinking water should be 6 mg/l.


Remmawai, executive engineer phed, believes that only the central and eastern part of the city get enough piped water. Out of the 20,000 connections, about 1,270 connections are metered and 18,335 connections are not. A flat charge of Rs 100 monthly is levied on households without a meter. Even this is high, when compared to the water tariffs of other Indian metros. Delhi, Chennai and Hyderabad, pay Rs 40, Rs 30 and Rs 60.

Water service charge is volumetric with progressive tariff rates. Although many consumers in Aizawl are not metered, they end up paying Rs 9 per kl, which is the highest when compared with other Indian cities like Delhi and Mumbai where consumers pay Rs 2 per kl and Rs 2.25 per kl respectively. Water procurement in Aizawl costs around Rs 66 per kl as compared to Rs 8 to Rs 9 in Delhi and Rs 5 to Rs 6 per kl (see table: High rates ).

"People pay only Rs 100 per month, which is very low and the phase ii project cannot succeed with this low tariff structure. With this huge subsidy and poor tariff structure, these piped water projects are not sustainable," says Dunglena. People will have to return to traditional rainwater harvesting for their needs, otherwise the current water crisis will escalate further in the future, Dunglena adds.


A study on Aizawl water supply conducted by lea International Ltd, a consultancy firm, found overstaffing at phed a serious problem. There are 995 staff members working for phed. This roughly translates to 50 staff per 1,000 connections, whereas the national ratio is much lower, with Kolkata employing 17.1, Delhi, 21.4 and Chennai, 25.9 persons. The current Asian average is 11.8 persons according to abd's statistics.

The phed staff salary bill is Rs 7.4 crore per annum, which is three times its revenue collection. If the Asian average was applied to phed, it would require only 236 staff members instead of the 995 presently on the pay rolls.


Aizawl also lacks a comprehensive sewerage system. Currently water from bathrooms and kitchens is discharged into nearby nullah s and the black water from toilets is handled by septic tanks with a soak pit system. But the city is so highly populated that some houses can hardly find place for soak pits, and they end up connecting septic tanks to nearby drains.


The current focus is on bringing water and not on sewage that is generated out of it. The city's sewage is discharged into nearby streams and pollutes Tlawng, the only source of water. About 60 per cent of the sewage generated in the city is collected in the Ser Lui and emptied into Tlawng. "The polluted water is treated and later pumped back into the city," says Lalduhwma.

"This is a serious issue. Although phed has made a proposal for sewage treatment plants (stp) and sent it to cpheeo, it has cleared the water augmentation process only and the sewage issue remains unattended with more sewage likely to pile up," he says. Lalduhwma also sheds new light on landslides, "During my site visits, I discovered that wastewater seeps into soil layers thereby setting landslides in motion. There is a higher probability of landslides, where there is excessive wastewater."

Like liquid waste, the city also has no plan for the solid waste it generates. Most of the solid waste from the city is collected and taken 12 km away on the Aizawl-Lunglei road. It is either dumped in the valley or burned causing environmental degradation.