Caught in a crossfire

Caught in a crossfire 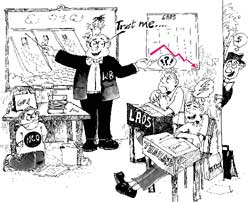 the World Bank's (wb's) keenness to promote an electricity generation project in Laos has come in for flak by non-governmental organisations. The project, slated to sell power to Thailand, is feared to spell doom for Laos' economy.

The 681 mw Nam Theun 2 dam project is located on Theun river, the fourth largest tributary of Mekong river in central Laos. Formulated in the early 1980s, the project gathered momentum in 1991, when the wb backed the recommendation of a feasibility study financed by the United Nations (un), which stated that the project was "the best option" for development of the impoverished country. Hydropower and timber are the most important resources in Laos.

The country is one of the poorest countries in Asia and has been plagued by a war for a prolonged period. The government of Laos plans to improve the economy by selling hydropower to the neighbours, especially Thailand, which has been industrialising rapidly. Banks and dam building companies see immense potential in Laos for hydroelectric power generation.

The issues that have evoked concern about the project include disturbance to ecology, resettlement of 4,400 people, and the adverse economic impact of a megaproject on the economy of a cash-strapped nation. The wb operations committee endorsed the project on October 31, 1997. However, according to officials, there were many questions to be answered and several hurdles to overcome before the project was submitted for board approval.

The key factor in the viability of the project is the price, especially after the financial and currency crisis in Thailand in the wake of a slowdown in its economic growth. As per the power purchase agreement between Laos and the Electricity Generation Authority of Thailand (egat), the country's state-owned monopoly, Laos is committed to provide 3,000 mw of electricity by 2006.

Ngo Zi Okanjo Iwella, the wb's country director for Laos, says that the decline in the demand for power, as a result of the slowdown in economy, could be between 11 and 12 per cent per year. This, Iwella says, would give enough room for the project to meet the electricity supply.

While Thailand's independent power producers, who are paid in us dollars, are renegotiating the contract with egat , half of the power payment in the case of Laos would be in baht and half in us dollars, Iwella says.

"We think the most likely risk under the current circumstances in Thailand is not that the dam project will have to be scrapped altogether, but that there would be a delay of as much as two years before it is launched," Iwella adds.

Aviva Imhof, the Mekong programme coordinator of the California-based International Rivers Network (irn), a non-profit organisation, has criticised the project, saying that it was misconceived. "In the midst of Southeast Asia's economic crisis, it is foolish for the wb to push the highly risky project. It is very likely that it will not bring in the expected benefits. The main risks are that the government of Laos will be further indebted and the livelihoods of thousands of local people destroyed," the organisation contends.

While generation of revenue to alleviate the poverty of five million people forms the basis for the project, the latest economic impact study commissioned by the wb is quite depressing. In contrast to the earlier annual revenue expectations of $176 million, the study states that the same could be as low as $36million per year.

According to the irn , uncertainty prevails as egat has yet not agreed to buy power from Nam Theun 2 and the project is not included in the egat 's latest power development plan. Another hurdle, as admits Iwella, is that the consortium of private companies, which plan to build and operate the dam, wants the wb to provide a sovereign risk guarantee of us $100 million for their investments against the risk of adverse policy decisions by the government of Laos. The companies are reportedly threatening to abandon the project in absence of this guarantee.Apart from economic deterrents, critics have also drawn attention to the environmental aspects. They say that while the project will displace more than 4,000 people from minority ethnic groups, thousands more would be affected due to disruption to fisheries. Disturbance in water flow could lead to floods, it is feared.

Laos' forest cover has shrunk from 70 per cent in the 1940s to 40 per cent at present. Deforestation is accelerating under the country's military regime that holds a monopoly over timber extraction since the early 1990s.

Supporters of the project say that promoting it would also mean protecting the environment. The wb, too, supports the argument that without the dam project, the remaining forest might go under the axe. Several environmental groups, including the us -based Wildlife Conservation Society (wcs), which has been active in Laos since the 1980s, also share the the view. In an open letter, Alan Rabinowitz, former director of the wcs in Asia, said: "My understanding is that with the initiation of the project, funds will be provided over the next 25 years for the proper protection and management of the dam area. Without such funds there is no hope for the long-term survival of wildlife that still exists on the plateau or in the area as a whole." Thai environmental groups, however, point out that the state-sponsored logging in Thailand did not stop even after the dam projects were completed.

The wb is planning to provide an International Development Association credit of around us $25 million, a part of which could be disbursed right away to help float health and income generation schemes for the resettled people.

wb officials emphasise that the aim of the resettlement plan is to raise the living standards of the displaced people by, for example, providing them with different and improved crop and animal farming opportunities.

Notwithstanding these social provisions and a proposed watershed management plan that will include the establishment of the biodiversity conservation area, the wb is being criticised by ngos. Probe International, a Toronto-based ngo with 20,000 members, says that the wb is being disingenuous about governance and management of issues related to the project, and in particular about the important role of the Bolisat Pattna Khet Phondoi (bpkp) , a military logging company.

bpkp has held a logging concession in the reservoir area of the proposed Nam Theun 2 dam for a long time and has been resettling people since 1995. According to Probe, once the bpkp has exhausted its stock of timber from the dam's reservoir area, it will continue logging in the remainder of the dam's watershed area allocated for conservation.

Further, according to the Laos branch of the International Union for Nature Conservation (iucn), bpkp 's past practices, including a ban on the cultivation of traditional crops in areas where it has been logging, have led to food shortage in the local population. It led to clashes with local farmers in 1997.

Probe says that the wb has failed to recognise the negative impact of bpkp on the dam project and the fact that it is a member of the committee formed by the government of Laos that decides on resettlement-related infrastructure projects and budgets.

In response to the criticism, Iwella admits that there were governance issues in the project that the wb had to consider. Regarding bpkp , she says: "From past experience in the regional rural activities, we have had a constructive engagement with bpkp . But we also know there are issues associated with it in the past and we have to ensure that they will not be repeated." bpkp will have to compete with other private companies in the public bids associated with the projects, she says.

But the question of bpkp participating in a bid related to the dam project, while being a member of the committee that decided on these bids remains unanswered. "We are aware that this project must benefit the country economically and should not add to its indebtedness or hardships," says Iwella.

Reacting to this, Imhof says: "Nam Theun has sucked in a huge amount of human and financial resources, depleting the Laos government's already weak capacity to deal with its developmental needs. The wb must surely understand by now that promoting megaprojects in poor and indebted countries is a recipe for economic and environmental disaster.

With additional inputs from Sopan Joshi.