Call it the fallout of seven years of severe drought or government inaction, a silent revolution is brewing in Lalitpur district of Uttar Pradesh. Communities are getting united and digging channels to bring water from government canals to their fields. Some are volunteering labour, while those belonging to Scheduled castes and tribes are using the government’s employment guarantee scheme to link their farms to the canals.

Their efforts are beginning to pay dividends. As one travels through Lalitpur, Tindra and Budwani villages present a sharp contrast to the situation prevailing in the district. Despite a prolonged dry spell, residents are harvesting two to three crops a year. And those who had migrated are returning home. The ball was set rolling at a funeral meeting in Tindra in April 2007.

Facing a severe drought since 2003, farmlands in the village looked like a moonscape. Deficit monsoon—40 to 50 per cent—ensured farming only in onetenth of the 140 hectares (ha) farmland. All but six of the 56 families in the village had migrated in search of living. “A few of them would visit the village only in case of a death,” said Uttam Singh, who works on livelihood issues with Parmarth, a non-profit in Uttar Pradesh. He visited the village for three years to initiate drought-proofing measures. “I could hardly find anybody,” he recalled. So he took the funeral meeting as an opportunity and talked to the gathering about a new life for their village. 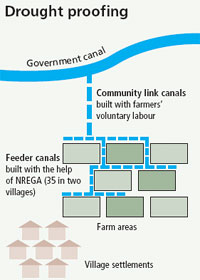 “We had to choose between this opportunity and the life as migrant labourers,” said Srinam Sahariya, who came to the village after almost a year to participate in the funeral meeting. Sahariya and a few other migrants agreed to stay back. Subsequent meetings saw the birth of a village association, Gram Chetna Samiti. And its first decision was to get water to the village.

It was a tough challenge All dug wells, dried since 2003, had silted up as people had abandoned them. The only option was to link the village with a nearby government irrigation canal. Though not perennial, it releases water four times a year for irrigation of kharif (summer) and rabi (winter) crops.

But diverting its water was illegal. Moreover, the link canal had to be dug through a patch of forest, which, a forest official had warned, required permission from the Central government. “We decided to go ahead without any permission,” said Ramesh Pardes, another migrant from the village. But several others cited loss of income as a pressing reason for not staying back in the village. At this point Parmarth activists promised them to facilitate works like road construction in the village under the Mahatma Gandhi National Rural Employment Guarantee Act (MGNREGA). These works ensured them a daily wage of Rs 100 and revitalised their spirit.

Sixty people worked nonstop for 60 days to dig the 2.37 km link canal, which is two feet (about 60 cm) deep and three feet wide. “Our family members took turns to work,” said Barelal Sahariya, a resident. In June 2007, the villagers saw water gushing right in their backyard. “The next rabi season, for the first time in my life, I grew two crops. This included wheat, which we had thought would never grow in our village,” said Srinam Sahariya.

In the past two years the link canal has ensured farming in 35 ha. “Twenty families now grow two crops a year, while 10 others grow three crops, including vegetables,” said Pardes. An estimate by residents shows their average annual income has doubled in the past two years. “Nobody has migrated this year despite the lingering drought,” said Singh with a smile.

The news of Tindra residents growing two crops a year spread like wildfire in the drought-hit Lalitpur district. In the neighbouring Budwani village, Sahrman Banskar floated the idea of digging a government-proposed canal by themselves. “The government had proposed a link canal to the village some 40 years ago. The proposal never saw the light of the day but we have been paying an irrigation tax of Rs 125 per acre (0.4 ha) since then,” said Hanumath Singh, a 60-year-old resident. 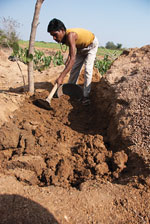 Banskar also prposed to stop paying the irrigation tax. Everybody agreed. “Water scarcity had turned our farms into wastelands. The new generation hardly ever cultivated the farms because of poor availability of water,” said Banskar. He has been elected as the sarpanch in the recent panchayat polls (see ‘Budwani’s canal sarpanch’).

“The jump is natural. Earlier, we could cultivate just 10 per cent of our land and that also to grow a single crop,” said Rakesh Rajput, a farmer. The revolution did not stop at the community link canals. They brought water only till the village and several farmers whose farms were far off could not benefit from them.

Encouraged by Parmarth, farmers belonging to Scheduled castes and tribes demanded work on feeder canals and levelling of their unused lands under MGNREGA. Under the law, these farmers can work on their fields to develop it while being paid a daily wage. So far, as many as 35 feeder canals have been dug in both villages to cater to individual fields. Crops now flourish in farms that used to lie fallow.

However, the threat of community clash hangs over the region as it takes irrigation system into its own hands. The canals will need regular maintenance and a robust water distribution mechanism with rising use. “We are aware of it and planning a village meeting on it,” Singh said.