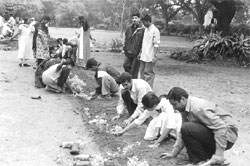 The planners of Bangalore University's new BioPark, located within Jnana Bharati -- the 1,200-acre campus grounds situated about 30 kms outside the city -- say it is a novel venture. Since 2000, 300 acres of the envisaged 800-acre park have been covered with three lakh saplings. These saplings consist largely of indigenous tree species from the Western Ghats, collected in an ex-situ conservation bid to enable faunal regeneration, as well as phytogenetic research on a number of trees known to be native to the Western Ghats.

There are other features as well that catch one's interest. The creation of ecological medicinal gardens, for example. These gardens blend techniques from the second century Charaka and the sixth century Sushruta treatises with modern rainwater and soil conservation techniques. A blend of traditional and modern science.

Conceived by Bangalore Univer-sity's previous vice-chancellor, K N Siddappa, and planned by retired environment secretary and forester, A N Yellappa Reddy, the park has been divided into nine geophysical sectors. Every cluster consists of a single plant species, although there are a few mixed forest sectors. "We need to plant all these species in adjoining zones to study their interplay factors...you cannot conserve something without knowing about it," says Reddy. The planting was undertaken in 2000-01 by over 1,700 National Service Scheme (nss) volunteers from affiliated colleges.

Sixty years ago, the area that is now the BioPark was a sandalwood reserve, used as an elephant corridor between what are now Bannerghatta National Park and Savanadurga forests. The area, not protected under the Forest Act, underwent unchecked degradation until the time that it was handed over to Bangalore University 30 years ago. However, the university paid no attention to this area until Siddappa's tenure in 1999.

The years of degradation have taken their toll. The area has been subject to severe leaching: nearly 70 per cent of the area's 750-800 mm annual rainfall leaches in 45 minutes after the rains. This works out to a substantial 3.6 million litres of rain yearly in the area. Of this, an astounding 2.6 million litres are squandered as surface run-off, according to Yellappa Reddy's calculations.

A series of check dams, gully plugs, furrows, contour trenches, basins and bunds have now been incorporated to allow this run-off to seep in. Planting has been inside dug basins to allow rainwater collection, and also in furrows plugged with soil barriers at intervals to prevent water runoff. Three check dams, each built at a cost of Rs 6 lakh, given by the Union Ministry of Water Resources, have come up with an inbuilt series of 'speed breakers' to check velocity and further erosion. Water levels have risen significantly, says superintendent Narayanaswamy.

Regeneration has been good, with a survival rate of 95 per cent. Slow growing Ficus trees have grown a surprising two-odd metres in just one rainfall year, and plants have retained their freshness in spite of the severe summer heat.

The traditional 'vanas' (forests) are also making good progress. Built with a contribution of Rs 2.5 lakh from the general public, this sector has a medicinal garden called Bruhat Pancha Valkalla, and a kadamba 'vana' near the campus centre for the use of students. People willing to pay a donation of Rs 25,000 can name an area in this sector in memory of loved ones.

Bangalore University has now received a Rs 1.165 crore biotechnology grant from the department of science and technology towards use of the BioPark for tissue culture, and medical and tree species research.