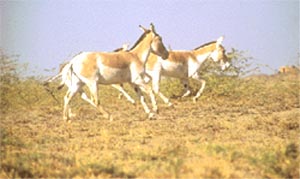 The Wild Ass Sanctuary in Gujarat is perhaps the only one of its kind in the world, surviving as it does along with pockets of salt manufacturing units and an army firing range. In this 'protected' area, the wild asses "are found on the periphery," according to Lt Col H S Sahi, in-charge of the army firing range. This is also why they are not harmed by the activities of the salt units that flourish within the sanctuary in the Little Rann of Kachchh ( lrk ) with government support. During the last century, the wild ass ( Equus hemionus khur ) was fairly widely distributed across the dry regions of northwest India and west Pakistan. They existed as far north as Jaisalmer and Bikaner in Rajasthan and Sind and Baluchistan in Pakistan. The animal was also found in the Nagar Parkar and Chacro tehsils (administrative block) of Tharparkar districts which adjoins the Great Rann on the Pakistan side.

Today, its population is restricted to the sanctuary in the lrk region. However, far from feeling protected, at present the wild ass is almost homeless.
The Wild Ass Sanctuary was set up by the Gujarat government in January 1973 in view of the animal's declining numbers. This situation was brought about by several natural calamities in the '60s. The sanctuary initially covered an area of 4,840.9 sq km in the lrk region. This was extended to 4,953.7 sq km in 1978.

But everytime the sanctuary was demarcated, the flourishing salt industries in its precincts were left untouched. Added to the salt units - also called salt pans - was an army firing range that to date continues to function inside the sanctuary. As a consequence, the wild ass is gradually straying towards the south on the Surendranagar highway till as far as the Nalsarovar bird sanctuary located southeast of lrk .
The ouster of the wild ass is effectively being achieved by the government's apathy towards the spreading of salt pans and related activities within the precincts of the sanctuary. lrk produces about 31 per cent of Gujarat's salt. These salt units were present in the lrk area long before the sanctuary came up. Today, their leases continue to get renewed despite the threat posed to the wild ass. Inter-estingly, the biggest salt pan in Kharag-hoda is owned by the government.

"The animals in the Wild Ass Sanctuary - including the chinkara, blackbuck, bluebull and wild boar - are severely effected by the noise pollution generated by the constant movement of trucks that transport salt from the units spread across the sanctuary," says S A Babi, sanctuary in-charge, based at Dhrangadhara. In some cases, salt pans set up on the fringe of the sanctuary destroyed species of grass like the Suaeda , Aeluropus and Cyperus , thereby threatening the region's habitat. Moreover, human presence has resulted in the construction of other infrastructure facilities. Remote sensing data has revealed a number of roads that have come up in a haphazard manner, severely affecting wildlife.
Along with commercial activities, the tranquillity of the place has been threa-tened by an army firing range. Despite the din created by the field guns, hand grenades, mortars and rocket launchers, Lt Col Sahi has a different view of the problem. He feels that the firing range is a blessing in disguise, for, when the firing is on, no human beings are allowed inside which thereby cuts down on the movement of the salt transporters. Sahi says, "For strategic purposes we have to continue using this area for our regular exercises. But, we take due care that none of the animals are harmed."

Supporting the colonel's view is an eminent social worker from Zainabad (situated on the southern fringe of the lrk ) , Mohammed Shabir Malik. He is of the opinion that the actual problem is created by the loss of the original habitat of the Gurkhar , as the wild ass is locally known. He was referring to another problem that has posed a danger for the animal: the wild growth of Proposis juliflora , also called the gando baval . These trees have eaten into the grasslands, leaving the wild ass with no option but to stray towards the farmlands in the neighbouring villages. The staple crops here are jowar and bajra , and cotton is the cash crop. Says Ramjibhai, a farmer in Dhrangadhara, "Sometimes, herds of wild asses enter the fields at night, feed on the plants and leave at dawn. It is a real problem." This has turned the villagers against the animal.

According to Malik, the biggest threat to wild ass habitat is the salt producing units "which are akin to jhum cultivation and keep moving base from one place to another." He further adds, "Having finished off with the soil reserves on the periphery (of the sanctuary) they are now moving to the centre."


This sorry state of affairs persists despite the increase in wild ass population from a meagre 720 in 1976 to the present figure of 2,839. The '60s had witnessed an alarming decline in wild ass numbers. This was due to a large number of deaths caused by the surra disease (an insect borne disease) in 1958 and 1960, followed by the outbreak of the South African Horse sickness in November-December 1961. Immediately after this came the drought of 1968 and '69 which took a heavy toll on the animals.

Wild ass numbers swelled after that last calamity in 1969. But the increase in population will be of little use if their habitat is destroyed and their homegrounds usurped.

Worse still, Dhamecha says, is the growing number of non-licensed salt producing units and dpm has already filed a complaint regarding this to the additional collector of Surendranagar. But Dhamecha feels that mounting pressure from the influential salt manufacturers' lobby is delaying matters.

Other litigations contesting the government decision to grant leases to the salt pans have been filed in the Gujarat high court. According to Dhamecha, the salt pans have spread to over 6,409 hectares (ha) in the last 14 years. Going by the present trend, the administration can either keep the salt pans in production or make an all-out effort to return the sanctuary to the wild asses.

The writer is a freelance journalist based in Vadodara