Andhra Pradesh circumvents all regulations to mine bauxite from tribal land 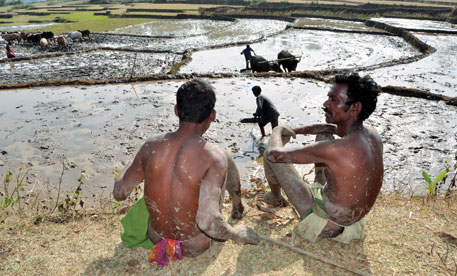 On December 20 when an expert committee of the Union environment ministry visited Visakhapatnam, tribal areas of the district observed bandh. Anti-mining protestors from different tribal groups and political parties, except the ruling Congress, blocked roads leading up to the Eastern Ghats. People wielding bows and arrows guarded some of the hilltops proposed for bauxite mining. The committee, which had come to study the socio-economic and environmental impact of the mining project, cancelled its visit to hills by road and returned after conducting an aerial survey. Anger is simmering in the tribal areas of the district—also known as Agency area—which fall under the Schedule Five category. Tribal groups and civil society organisations allege the Andhra Pradesh government is flouting all regulations and a Supreme Court judgement, meant to protect constitutional rights of tribals over their traditional land and resources, to appease two companies. Jindal South West Holdings Limited (JASWHL) and ANRAK, a joint venture of the government of Ras Al Khaimah from the United Arab Emirates and Andhra Pradesh-based Penna Cements, are setting up aluminium plants in the state for which bauxite is the raw material.

“The government acquired environmental clearance for the mining project despite our strong opposition and without consent from gram sabhas,” says K Surendra, district president of Girijana Sangham, the tribal wing of CPI(M). According to a study by the Centre for Economic and Social Studies (CESS) in Hyderabad, the government plans to mine 27 hills in Araku Valley, Ananthagiri, Chintapalli and G K Veedhi blocks. The project will affect at least 270 villages of Kondh, Bagata, Konda Reddi and Samanta among other tribes, who traditionally inhabit the Agency area.

The Centre had stalled the project in 2010. It was the time around when people’s agitation had forced the Union Ministry of Environment and Forests (MoEF) to cancel clearance to Vedanta’s bauxite mining project in Niyamagiri hills in Odisha. But the recent visit by the MoEF committee shows fresh efforts are being made to revive the project. People feel betrayed as the committee’s visit came despite assurances by Union tribal welfare minister Kishore Chandra Deo, who hails from the Agency area, to take up the matter with MOEF and get the clearances cancelled.

Andhra Pradesh holds 600 million tonnes of bauxite, which, according to the Geological Survey of India, is 21 per cent of the country’s total reserve. More than 90 per cent of this reserve is concentrated in six deposits in the Eastern Ghats of Visakhapatnam (see map, table). The deposits falls in the Agency area, which is part of reserve forests and has a rich biodiversity. Environmentalists have long been pressing MoEF to declare the region a biosphere reserve.

But industries eyes the land. In fact, the state had initiated plans to tap the resource during the Telugu Desam Party regime in 2000. The then chief minister N Chandrababu Naidu had used every trick in the book to attempt amendments to laws governing land rights of tribal people and the Constitutional protection of Scheduled Areas, but had failed. The Congress regime under late Y S Rajasekhara Reddy, who came to power in 2004, managed to get around the problem. 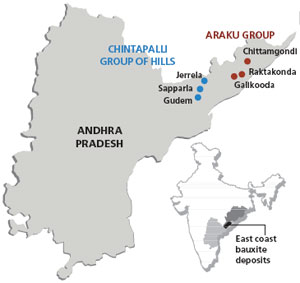 Since the Supreme Court’s Samata Judgement in 1997 prevents any private company from owning or leasing land for mines or industry in the Scheduled Areas of the state, the MoUs are made tactfully. The judgement had allowed public enterprises and cooperative societies solely run by the tribes to mine in accordance with the forest and environmental laws. So the Andhra Pradesh Mineral Development Corporation (APMDC), a public undertaking, will mine bauxite on behalf of the companies. “We will supply ore to Jindal from Araku blocks and to ANRAK from Jerrela block,” says K Rajasekhara Reddy, general manager of APMDC. The companies will bear the cost of mining. APMDC will receive 1.25 times of the royalty and 0.5 per cent of the annual turnover of the companies. Mining for ANRAK will start before June this year, he says. To avoid land transfer regulations, which prohibit transfer of tribal land to non-tribals, the companies are setting up plants outside the Scheduled Areas.

“The government is considered the trustee of the natural resources. But APMDC is acting as a front company of the industries,” says G Srinivas of Samata, a non-profit whose petition is the precursor of the Samata Judgement. “The proposed mining plan negates the spirit of this judgment,” says E A S Sarma, former tribal commissioner. 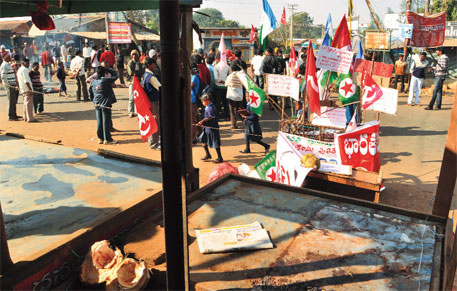 Further, the project violates the Panchayats Act (PESA) and mining laws. APMDC has not sought the mandatory consent from gram sabhas and the Tribal Advisory Committee (TAC). The TAC consent submitted by APMDC was obtained in 2000 for a mining project that was later dropped, says Naidu, now an ardent opponent of bauxite mining. “APMDC cannot use an old consent for a new project.”

Besides, the government is yet to settle forests rights of the tribals. Around 160,000 ha of the Agency area belongs to the tribals as per the Forest Rights Act but the government has so far granted pattas (land titles) for around 16,000 ha. “In 2009, it made grand announcement about giving pattas for 40,500 ha, but nothing has been done so far. If mining is allowed before settling pattas, thousands of the tribals will be thrown out of their homes,” says Narasinga Rao, district secretary of CPI(M).

APMDC insists that 26 per cent of the revenue earned from the project will be spent on development of the tribal communities as profit-sharing. It claims mining will generate employment for 20,000 people in the area, though an RTI query by Samata reveals that APMDC does not have details of the possible employment generation. However, it has selected 215 youths from the proposed mining areas and is providing them mining training and a monthly salary of Rs 7,500. Officials say the expenses will be borne by the companies.

The MoEF committee that came to study impact of mining on the Agency area and its people, tried to convince the media about benefits of mining at a press meet in Visakhapatnam on December 23. Mining would bring better health care, education and infrastructure facilities to the backward tribal villages, and the hills will be greener after reforestation, they said. J C Kala, former chairperson of the National Environment Appellate Authority, who headed the committee, said: “Do you want to keep the tribal always backward?” 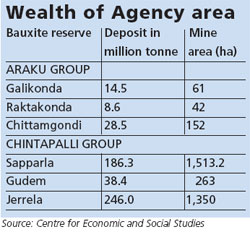 The committee insists the environment impact assessment (EIA) reports for the mining projects were prepared by prestigious institute, Indian Council of Forestry Research and Education. They elaborately deal with socio-economic issues of the tribals. But an analysis of these EIA reports by the Centre for Economic and Social Studies (CESS) shows the EIAs have ignored the social and livelihood issues of the tribals.

A visit by Down To Earth to some of the tribal villages proposed for mining confirms this. Most villagers in the Agency area are small farmers with land holdings up to a hectare. They cultivate coarse rice, jowar, pulses and varieties of beans and coffee. Many eke out a living by collecting forest produces.

India’s first tribal growers’ organic coffee brand was launched in the Araku Valley in 2007. The premium organic Araku Emerald brand of coffee has buyers from around the world. Thousands of tribals in the Agency area are engaged in coffee cultivation as farm hands or small farmers. Mining would affect over 1,400 ha of coffee plantations in the valley. “If the government can give us the same forest, same hill and same kind of coffee plantations as compensation, then maybe I’ll move out,” says Kora Bheemanna, a Nooka Doora tribe of Beesupuram village, on the slopes of Galikonda hills. He has half-a-hectare plantation, which fetches him around Rs 20,000 every season.

“Once mining begins on their land, they will all turn labourers,” says B David, a Kondh youth working with Primitive Tribal Groups Welfare Association in Araku. Going by APMDC, the Araku deposits will last only 15 years. Where will the cultivators-turned-labourers go after that, he asks.

In Chittamgondi, a small village of 21 Kondh families, all the families have applied for patta. “No one from the government asked us if we wanted to give away our land,” says Kilo Muthayi, a community health worker in the village. “We cannot live anywhere else. All we know is how to collect forest produce and cultivate. But these youths, whom the company (read APMDC) gave jobs tell us our land belongs to the company.”

Further, with lush green forests, streams and waterfalls, Araku Valley is emerging as a tourist destination. “Araku is the state’s Kashmir,” says Poojari Gasi of the Tourism Tribal Contract Labourers’ Union of Borra Cave. The cave, considered the deepest in the country and lined with stalactites and stalagmites, is the main attraction. It is just three kilometres from the proposed mining site in the Ananthagiri hills.

Since bauxite exists in thin but extensive layers on top of the topography, it has to be mined open cast. This would require clearing of a large forest cover and blasting off the hilltops up to a depth of 100 feet. Its impact on the sensitive ecosystem of the Eastern Ghats will be irreversible. At least six rivers flowing across the hills may dry up or reduce to a trickle. This will affect major reservoirs which are the only source of irrigation and drinking water for Visakhapatnam and Vizianagaram districts.