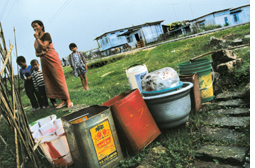 When Sted Syiemlieh was a little boy, people in his mountain village, Tyrna, a few km from Cherrapunjee in Meghalaya, could predict when the skies would open up. "It was always at the same time," the 75-year-old farmer says. "Those days, we could tell how long the rain would last. If it went beyond three days, we knew that the rains would go on for nine days. So, we would prepare to plant our crop accordingly," he says.

Back then people in his village used to plant oranges, coffee beans, paan and bay leaves, betel nut, sweet potatoes, yam and other tubers which they traded for rice, vegetables and dried fish at the weekly haat some 25 km away, in what's now Bangladesh. That trade stopped decades ago with the drawing of borders. "Those days, we did not have to worry about food like we do now," Syiemlieh says. "Now everything is upside down. It's difficult to predict when the rains will come."

Difficult to predict maybe but skies do open up in Meghalaya's East Khasi Hills. It had been pouring incessantly since we left Shillong for Cherrapunjee in the wee hours of June 16. Thick, swirling clouds that give this northeastern state its name--Meghalaya, abode of clouds--had reduced visibility to near-zero in places.

"It's no longer Cherrapunjee, we call it Sohra, now," Raymond Kharmujai, a young local journalist and my guide for the day, informs me. After over 180-years of going by the name given by the British, who couldn't quite master So-ha-ra, the once undisputed wettest place on earth has now officially reverted to its traditional Khasi name.

Located at 4,267 feet above sea level and well connected to the Sylhet plains (in what's now Bangladesh), Sohra was the first British headquarters in northeast India. The English who settled here in 1820, calling it the "Scotland of the East", were also the ones who discovered its special status as the wettest place on the planet. But the rains proved too much for even the hardy colonists, and in 1850 they beat a retreat from Sohra.
As our car snaked down the winding road, I peered through the rain-streaked window to discern the ghostly shapes we were speeding past. The landscape was barren but grassy. What used to be hills but were now just silent, wounded pieces of earth, gouged out, cut in half, denuded for their timber and soil. Here and there by the roadside, there were little holes in the earth surrounded by heaps of coal leaking streaks of black water--rat-pit coal mines, they are called. And limestone kilns with thatched roofs--out of commission during the monsoons--but still giving out the acrid smell of burnt lime.

Meghalaya has extensive deposits of coal and limestone (used to make cement), concentrated largely in the southern slopes of the state--the East Khasi Hills, the Garo Hills and the Jaintia Hills districts. The total estimated reserve of coal is 640 million tonnes and limestone reserves are estimated at about 5,000 million tonnes.
It's a Sunday morning and Sohra town is pretty much deserted. All shops are closed, and the downpour has kept most people off the street. So we move on to explore the nearby villages, stopping at one of the lime kilns by the roadside. Two workers stand guard over stacks of damp firewood. The rest, says one of them who gives his name as Sangma, will return in October, after the monsoons end. When it's functional, the kiln sometimes burns for weeks. The two workers live in a little raised shack by the kiln and make occasional trips to Sohra town market for food. "Not much to do here during this season, just watch the rain and try to keep dry," says Sangma.
Sohra and its surrounding areas receive both the southwest and northeast monsoon showers. 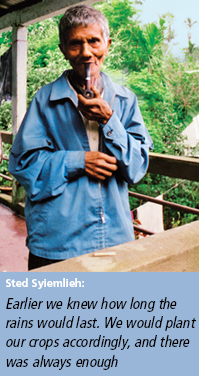 From June to September, the monsoon comes in from the Bay of Bengal over Bangladesh.

The heaviest rainfalls are experienced during these four months. Because there are no mountains in Bangladesh, the rain-bearing clouds are forced to deposit much of their moisture and rain on these hills. In the winter it receives the northeast monsoon showers.

For many years Sohra was considered the wettest place on earth. It features in the Guinness Book of Records as the place with the highest rainfall ever in a calendar year--22,987 mm between August 1880 and July 1881. It also holds the record forthe highest rainfall in a single day 2,455 mm in 1974.

But it's no longer the wettest place, largely due to rampant deforestation. The small town and the villages around Sohra--home to over 70,000 Khasis-- have been receiving less and less rain over the years.

According to the Regional Meteorological Centre in Guwahati, Sohra's yearly rainfall average over the last decade stood at 11,070 mm. Last year, it recorded only 8,730.1 mm, about 35 percent less than even the normal average rainfall. The competition for wettest place is now between nearby Mawsyrnam (where the average rainfall is 11,873 mm) and Mount Wai'ale'ale in the Hawaiian island of Kaua'i (average rainfall 11,684mm).


Today, Sohra is the wettest desert on earth. With no trees or big reservoir to hold it back, rainwater runs down into Bangladesh. All around the mountainside, during the monsoons, one can see a host of waterfalls rushing downhill. And by winter they all run dry. As do the local springs. Sohra faces acute water shortage, especially during winter. People here often have to walk for miles to collect drinking water from government-installed pipelines set up nearly 25 years ago. And even that supply, which comes twice a day, isn't free from contamination by bacteria and runoff from the coal mines. 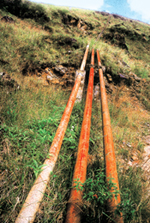 "The rain also washes away the topsoil every year, hampering farming and reforestation efforts," says O P Singh of the Centre for Environmental Studies at Shillong's North Eastern Hill University. "There's no sustainable water supply in the valley, though people are beginning to build small check dams for irrigation," he says. More than 50 per cent of the forest cover in and around the Sohra valley is gone and Singh believes replacing it would require new methods of replanting.

With agriculture suffering people have had no choice but to look for alternatives. Like mining for coal and limestone and stone quarrying. Most work as daily labourers in the mines or in the lime kilns, or run the mines themselves. "A few still grow betel nut and paan leaves, and others make a living by cutting grass to make brooms," says Badaiahun Wanwar, a primary school teacher at Tyrna.


Closing access to the traditional haats that now lie across the Bangladesh border has also been a great loss for the people in the southern Khasi hills, Kharmujai tells me. "The people here were once very prosperous because of trade with people from the plains further south. But after partition and the creation of Bangladesh, their main trade route has been cut off and that's affected the local economy," he says.

Food, especially fresh produce, is scarce in the area now and has to be shipped in from Shillong. When we stopped for lunch at a small "fast food caf" in a tiny village called Saitsophen, there were no greens on offer. Only noodles, eggs and doh jem-- pig intestine mixed with onions, and a few basic spices like turmeric and cloves.


The advent of the monsoon is, however, still cause for celebration. "Most of us are still cultivators at heart," explains Tirot Sohleh, a relative of the caf owner. 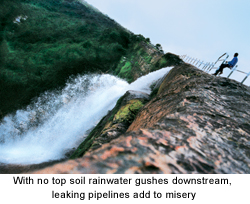 When the rains begin, people dance for two days to drive out bad spirits. And then it is life as usual, aided by umbrellas or huge woven bamboo hats. "For outsiders this kind of rain is heavy, but for us it's a just part of our lives," says Sohleh. "Landslides make travelling difficult, and sometimes life comes to a standstill, but when it doesn't rain, our children fall ill."

On our way back, we stop by Sohra market hoping to catch some activity. The place is still largely empty, though the downpour has thinned quite a bit. Two old women at a vegetable shop tell me that this morning Sohra had received rain "like the old days." But it didn't last, not like their childhood days in the 1950s when they often didn't see sunlight 40 days at a stretch. Like Syiemlieh in Tyrna, they too believe everything is upside down now.