Chronicle of a journey foretold

Water trains aren't a strange sight anymore. Not the least in the parched areas of Gujarat. But while many villages await their erratic supply, residents of villages such as Raj-Samadiyala in Rajkot district believe it is a 'shame' to get government water. Nor have they felt the need. A sound water management system has ensured perennial water in their wells even as the rest of Gujarat reels under a severe water crisis. The New Delhi-based Centre for Science and Environment organised a ' pani yatra ' -- a water pilgrimage -- for mediapersons to a few of these model villages. The visit left some 'pilgrims' frustrated at the plight of the affected villagers. They decidedly returned with a firm belief that the drought is a result of human folly

Chronicle of a journey foretold 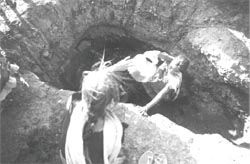 there are parched river beds as well as flowing rivulets; water at depths of 3-5 metres and dry wells even at 60 metres; hectares of land filled with cacti and areas lush with mango, lime, even water melon: the contrasts cannot be more stark among villages in Gujarat.

On a particularly hot afternoon, groups of women and children are seen peering into holes dug into the aptly-named Sukhi river bed in Dahod district -- the yatra 's first stop. An air of despondency hangs about the gathering. Nine-year-old Meena has been lowered a metre-deep to collect whatever water seeps out. Patiently, the child holds up the small vessel to her mother who filters the water using a fine cloth before gratefully pouring it onto her earthenware pot.

At another hole, there is Latabehn, 35, engaged similarly except that she is passing it on to 60-year-old Lakibehn. Patli, well into her eighth month of pregnancy and a family of seven to feed, has also come to fetch water. For months, women from villages like Retia and Doki, a good three to four km away, have been making the day-long trip to the river bed everyday to collect a miserly two pots of water.

Compare this with nearby Mahudi village. Kirkibehn and her family of five do not have much to worry about. The Machchan, which flows past their village, has kept the water crisis at bay. The rivulet has managed to retain a portion of the water collected during the 1998 monsoon season, thanks to their traditional rainwater harvesting practice.

A series of checkdams, 14 in all, dot the rivulet. The villagers constructed the Mahudi checkdam with a capacity of some 1,100,000 cubic metres of water in 1993 with technical and financial assistance from N M Sadguru Water and Development Foundation, a non-governmental organisation ( ngo) working in 350 villages in Gujarat, Madhya Pradesh and Rajasthan. "But for the checkdam, we would have been without water like the other villages," says Kalabhai. There is still enough for people to dive into the green waters of Machchan. But, to be play it safe, the villagers have decided to use the Machchan water strictly for domestic purposes and irrigating a single crop. This has not affected them unduly. Kirkibehn, for one , has four drumloads of gram, maize and lentils carried over from last year's harvest.

A similar situation prevails in Polapan village in Rajasthan's Banswara district. The Sadguru-initiated soil and water conservation measures have ensured water availability in the wells at depths of only 3-4 metres.

After a visit to the villages in Dahod, the yatra moved on to Raj-Samadhiyala village, 20 km from Rajkot city. This is the land of the 'benevolent dictator', as sarpanch Hardevsinh Balwantsinh Jadeja calls himself. The 48-year-old sarpanch has been working for the last 28 years to foster economic, social and cultural values among the villagers.

A decade ago, the village was declared a dry area and put under the arid zone development programme of the state government. Not one to sit back and wait for the inevitable, Jadeja -- who also heads the 11-member village development committee -- took upon himself the task of creating a rainwater harvesting programme for the village. A hydrogeological survey was conducted using Indian Space and Research Organisation's satellite imagery to locate fissures in the topography where percolation of water is maximum. He then led the villagers to construct 12 checkdams between 1986 and 1988. Since 1998, they have also implemented 50 microwatershed projects. The results are phenomenal. Despite poor rainfall in the last two years, the village has plenty of water. "Till I am alive, no tanker will enter the village," says the proud sarpanch . "Not for another five-six years of drought."

Jadeja has also enacted the Raj-Samadhiyala Penal Code, which he holds in higher regard than the Indian Penal Code, for all-round development of his village. Drafted in 1978, the items in the code have increased over the years. These include a fine of Rs 51 for breaking a leaf, Rs 151 for alcohol consumption, Rs 251 for gambling and so on. And not even Jadeja is spared from being fined. Recently, he was asked to cough up a hefty sum because his cattle were found eating the leaves of a tree. Thanks to the code, no police personnel has entered the village for two decades and the crime rate is down to zero.

Now, adjoining villages like Aniyala, Aili Sajadiyala and Laklapur are taking a cue from Raj-Samadhiyala. Indeed a lifetime achievement for the man who believes "Raj-Samadhiyala is my India".

The final destination was Savarkundla taluka (block) in Amrelli district. Inside the office premises of the ngo Kundla Taluka Gram Sewa Mandal, everything is extremely Gandhian. The Mandal began work in the taluka in 1936 when it was established by three members -- Amulakhbhai Khimani and the late Keshubhai Bhavsar and Lallubhai Sheth.

Among the numerous projects started by the Mandal, of which Manubhai Mehta is the project coordinator, is the water management programme in 58 out of the 82 villages in the taluka . This was also borne out of the realisation that given the topography, it was unlikely that the Narmada dam, if completed, would bring water to the villages.

The water table has risen considerably to sustain them through the drought period. In Dedakadi village, for instance, all the 150 households have piped water. In fact, according to Pragji, a villager, they even provided fodder to the affected villagers to tide over the difficult times.

It is another matter that if it doesn't rain this year too, they will be forced to search for livelihood elsewhere. "But not for water," points out one of them immediately, adding: "Water we have enough. We will be idle because we won't have work to do."
On the food front too, plentiful harvests of the previous years have helped them to pull through with relative comfort.

Besides Mahudi, Raj-Samadhiyala and Dedakedi, Gujarat has numerous examples of community effort which has kept the water crisis at bay. In Dwarka, the system of conserving rainwater in underground tanks has ensured a perennial supply of water for drinking and cooking ( see box : Tradition saves).

In some places, the drought has made people value water. Residents of Jamnagar have desilted Lakhota lake for the first time in 100 years ( see box : Clean-up time ). Perhaps just in time for the monsoons to water its dry bed.

With inputs from Yoga Rangatia in Jamnagar