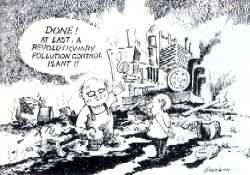 CLEAN manufacturing technology is governed by the "prevention is better than cure" dictum. End-of-the-pipe strategies for controlling pollution can never be as cost-effective as waste abatement programmes, which reduce effluents by simply increasing efficiency.

As the former head of the environment cell at the National Productivity Council, Nyati had conducted several surveys for private firms. At an engineering unit in Gurgaon in Haryana, for example, he found it was possible to save Rs 30 lakh annually in the amount of diesel consumed for power generation if only air leaks were plugged and unnecessary lights switched off.

P B Duggal, secretary of the Federation of Associations of Small Industries of India, offers as another example an alternative to the steel and aluminium plates that are used as signs by the Indian Railways. The plates are etched using acid and then printed with ink resulting in highly polluting acidic effluents at the site. If the plates are replaced with plastic stickers as is done abroad, pollution can be controlled and the cost of the end product brought down, for Duggal's estimates show plastic stickers are cheaper than steel or aluminiurn plates.

The United Nations Industrial Development Organisation (UNIDO) feels the main barrier to ecologically sustainable development is ignorance of clean technology. UNIDO experts have pointed out during site visits that simple steps, if taken immediately, can lead to major environmental and economic benefits.

Given access to the necessary technical information, industrial in managers developing countries could mitigate environmental degradation and make money simultaneously by addressing waste and emission problems at source.

For disseminating such knowledge, UNIDO has a project called the "Demonstration of Cleaner Production Techniques". This sets an example by upgrading existing plants to the best available clean production standard and later using them for promoting the same approach in the whole industry. To begin with, the project will upgrade three canesugar factories in Mexico and two cement factories in Egypt, initial audits for which were started in March 1992. These plants will be assisted in carrying out waste reduction audits and, later, in implementing waste abatement programmes.